Wheres the Courage of our China Conviction? 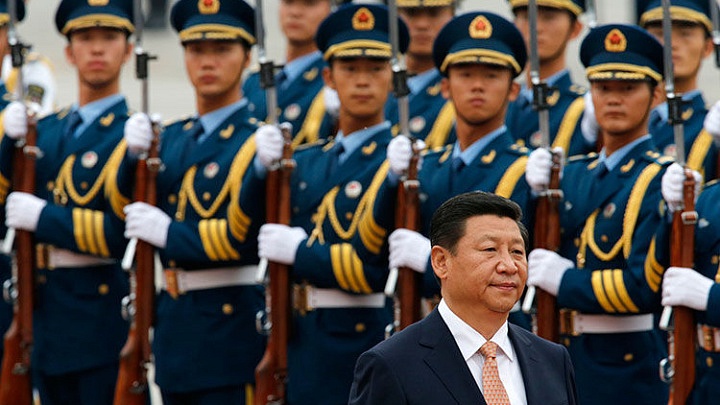 China is the foremost security challenge the United States faces in the future. At least that is the conventional wisdom. Declaring victory, or at least apathy, in the Middle East upon his election President Obama swiftly declared (and then retracted somewhat) a Pacific Pivot. The Department of Defense, understandably wishing to ignore a decade long failure in Iraq and Afghanistan, was all too happy to return to a new cold war against a modern foe who would demand masses of highly expensive military equipment to thwart.

Civilian think tanks, working with generous DoD and defense industry grants, quickly developed scenarios which amazingly enough demanded precisely what the various services, particularly the United States Air Force, had already decided to purchase. Air Sea Battle as envisioned by the Center for Strategic and Budgetary Assessment (CSBA) is a scenario apparently custom made for F35s. One might argue deliberately so.

Having shored up lagging congressional support for a program which has violated every legislative check on procurement pork, CSBA published a new scenario which matched the USAFs newer desire for fleets of long range bombers: A New Offset Strategy. Here, CSBA boldly predicts that short range fighters, the kind Air Sea Battle based its entire warfighting strategy around, would be unable to operate against China. Rather, stealthy, long range bombers are essential to penetrate the predicted Chinese defenses. The top three procurement desires of the USAF: F35s, bombers, and the new tanker fleet to support them are immaculately justified by independent analysis.

The fact that the two scenarios are mutually exclusive is somehow a detail too minute to discuss. If Air Sea Battle is correct, then we do not need 200 new bombers. If New Offset is correct, 2400 F35s is not only wasteful, but criminal in the projected lives lost against an enemy we knew beforehand could counter them. But either way, we must ask why we require so many new aircraft after the precision guided munitions revolution should have reduced our strike requirements by an order of magnitude? Because China is building a massive army, navy and air force. And they are building it with our money.

While many wish to compare our current challenge with China to the previous cold war against the Soviet Union (and, more to the point, wish to emulate our procurement strategy from a generation ago) the preeminent fact is that China enjoys Permanent Normalized Trade Relations (PNTR) (known more generally as Most Favored Nation trade status) with the United States. For all our efforts at realpolitik, détente and glasnost, we never gave this status to the Soviet Union. In fact, we explicitly used the promise of this status to place pressure against the Soviet Union (Jackson-Vanik amendment of 1974 which was repealed in 2012.) Yet now, our apparatchiks in the Pentagon demand we spend another fortune to counter a military built with a fortune we provide. It is logical to assume the easiest way to sink a ship is to not give your enemy the money to build it in the first place.

Our trade imbalance is approximately $310 billion per year with China. In 1990, prior to PNTR, this number was about $10 online casino billion. Chinas claimed defense budget in 2014 was $130 billion. This excludes the very real, but harder to quantify, advanced technology we have given to China which gives them not only the quantity, but the quality which demands only the most expensive military hardware. We must accept the fact that we created the dragon which many now demand we prepare to slay at great expense.

To revoke PNTR, and to restrict trade with China, would be highly damaging to the United States economy. The lists of companies highly dependent upon China for supplies would be a whos who on the Dow Industrials. The destruction it would wield on Wall Street is too obvious to detail. It might take a decade or more for the United States to adjust to a world without cheap Chinese labor. But it would be an existential disaster to the free trading capitalist commissars ruling through the Chinese Communist Party.

One of the many contradictory ironies in the Sino-American relationship is that the implied casus belli in the South China Sea (SCS) has partially developed because China feels the need to secure trade routes and energy resources to continue fueling its manufacturing base; itself highly dependent upon American markets. In the absence of that market, the SCS loses much of its materialistic appeal. The feverish island building on the aptly named Mischief Reef could easily be countered military immediately by the United States and our growing band of allies, friends and mutually concerned parties throughout the Pacific region. If we choose to not stop China now when it would be easy, why would anyone, particularly China, believe we will do so when it is hard?

Is China a serious threat to American interests? To the many hawks lobbying vociferously to fund unquestioned the demands of the defense experts, the answer is an unblinking, Yes. The consistent actions of China in the past decade certainly show, at the very least, China’s disdain towards American sovereignty. The latest data hack affecting 4 million government employees would be shocking from some of our other PNTR partners. Chinese complete disregard for intellectual property rights has become an unquestioned fact of doing business with them. But before spending a trillion dollars on military hardware, should we not first attack the means by which China acquires its apparently terrifying capability? Failure to do so merely highlights the unserious nature of the China alarmists. To the would-be dragon slayers I request, on behalf of the men and women who will fight that future war and the taxpayers who will fund it, first demonstrate the courage of your convictions.