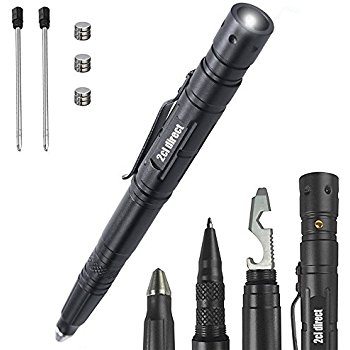 Most of us buy, use and lose pens without much thought. These little things don’t seem to matter too much to our daily lives. But those are just normal pens. A tactical pen is something totally different. It is a great way to turn an everyday object into a tool for survival and self-defense. However, there are hundreds of different choices out there, and to make the most of this tool, it is important you have the best tactical pen you can have.

Finding this pen can be quite difficult, though. So we tried to make it easier. We put our tried and tested review methodology to work and have found the best tactical pen—the 2cl direct tactical pen. It is well-built, it offers lots of different tools, it’s easy to use and effective, and it’s affordable, combining everything you want.

To get a tactical pen that will work great as both a pen and a self-defense item, get the 2cl direct tactical pen now.

Why You Should Trust Us

This is the spot to come for all things tactical. We are avid hunters, hikers and campers, and our passion is finding the best gear we possibly can. This passion transformed from something we did just for ourselves into something we do for others. We only recommend the products we would use ourselves.

But beyond our desire to find the best, we have a proven system of finding the highest quality products. Our methodology involves using a set of criteria that the best product would have. We then systematically review and compare all the different options, eliminating those that don’t make the cut.

This process involves hundreds of hours of research. We read countless reviews and cross check numerous specifications, leading us straight to the best. You don’t have the time to be as thorough as we are, so don’t. Let us do the work and know that the products we recommend have been put under heavy scrutiny and truly are the best.

Why You Need the Best Tactical Pen

It isn’t a big secret that the world isn’t as safe as it used to be. Danger lurks all around us, and you can never be too prepared. While your best defense against these threats would be a concealed firearm, this isn’t always practical. But you shouldn’t let this leave you underprepared for an emergency.

A tactical pen is a good last-resort option. It looks and works just like a regular pen, but it usually features a sharpened point, a glass-breaker, a flashlight and other tools, such as a serrated edge or a bottle opener. While this likely won’t be enough to stave off serious threats, it can definitely be enough to buy you some time so that you can get to safety.

These pens can also be used to get you out of other emergencies. For example, you can use the hard point to break a car window in the event you were trapped inside. Or, the flashlight feature can come in handy in a variety of situations.

But you should be weary of buying just any old tactical pen. There are lots of options out there, and although they all cost around the same amount, they are quite different. You can easily spend the same amount of money on a pen that’s loaded with extra features as a simple, featureless pen.

To us, this is a rip-off, and we don’t want this to happen to you. That is why it is so important to put in the time to find the best tactical pen. It’s the only way to make sure you are getting the most value for your money.

How We Conducted Our Review

Our review process starts with taking a look at what others have to say. We immediately eliminate any products that get consistently bad reviews.

From there, we begin to narrow down the list by comparing the available options against a wide range of criteria. This helps us trim the list down even further. Then the next step is to test out the products ourselves so that we can give a first-hand review of the product.

We compare the different options using the following criteria:

One of the things you will find in the best tactical pen is a high-quality materials. These things are supposed to be tough and to last forever. Most of the best pens will be made from top-quality steels or aluminums. The goal is to find something that is going to resist rust and that will not break.

A tactical pen is a pen first. But it is so much more. You want to try and get as much out of your pen as possible. The best tactical pens usually come with a sharp point that can be used for self-defense, as well as a hard window breaker.

They also usually come with additional tools such as a flashlight and a multi-purpose tool that includes a bottle opener and serrated edge. These pens almost function as a type of multi-tool or pocket knife, although they certainly aren’t the same thing.

While a tactical pen has lots of different uses, it is still a pen. You want something that will at least be functional. Otherwise you may not see a need to carry it with you.

Also, if it doesn’t work as a pen, and you don’t use it as such, you may give away the element of surprise associated with using it. People will know it is more than just a pen and this may leave you at a disadvantage. Look for ball point pens so that you can easily replace them when you run out of ink.

The first thing we did was to go through existing reviews. Any tactical pen that had less than a 3.5-star rating on Amazon for legitimate reasons was immediately thrown out.

Then, we started to comb through the different options based on the criteria we mentioned above. This allowed us to systematically eliminate some of the top-options, bringing our list down to just four. Next, we tested these remaining few, and this led us to our recommendation for the best tactical pen.

Here are the results of our this process of elimination:

We eliminated the first set of tactical pens largely because they didn’t have enough features. As we mentioned earlier, there isn’t a very large range of prices on these products. Because of this, it doesn’t make a whole lot of sense to spend money on something that gives you less.

Some of the pens we threw out because they were lacking features were the Pocket Partners Practical Tactical Pen and the TakeFlight Tactical Pen Self Defense Weapon.

The next reason we eliminated some options was because of their writing quality. As we mentioned earlier, these things are still pens. So we want them to work like pens. Some of the top options, though, just don’t meet this requirement, such as the Smith and Wesson Military and Police Tactical Pen.

Lastly, we threw several possibilities out because of their design. Some of them didn’t work well when using a reverse grip, something necessary for both breaking windows and stopping an attacker.

Or, some of these options were thrown out because of the way in which you switch between the different tools. If you have to remove a cap and can’t store it anywhere, the pen ceases to be convenient. We want as few moving, losable parts as possible.

Examples of those we eliminated because of this are the two options offered by Take Flight.

After going through this process of elimination, the next step was to test the remaining few out ourselves. This allowed us to make the final cut, which brought us to the best tactical pen. Here are the results: This pen is really the best combination of build quality and functionality. It has a great set of tools and a flashlight, it’s made from aircraft grade aluminum, and it writes great. The 2cl direct tactical pen easily wins the title of best tactical pen.

This pen looks and feels great. It is made from aircraft quality aluminum, meaning it won’t break or rust pretty much no matter what. It also gives it a sturdy feel you would expect from a tactical pen.

The other thing that stands out about this pen is its features. It has a hard point for self defense, a tungsten carbide tip for window breaking, a bottle opener, flashlight, serrated edge, hex wrench, scraper and screwdriver. And all of these tools can be accessed easily by simply pulling on the end of the pen and flipping it around. You don’t need to worry about caps or covers that you can easily lose.

Also, this pen writes great. The ‘heaven’ writing technology makes for a smooth stroke across the paper. You will find yourself using this pen like a normal pen, as well as a tool.

Lastly, at under $40, it comes with a very reasonable price tag. This is what you can expect to pay for virtually any tactical pen, but none has the features of this particular model.

Probably the only negative of this pen is that it is a bit heavy. But that is to be expected for a tactical pen with so many features.

Also, the pen comes with the window breaker as the default. As a result, you need to flip it around to access the pen. If you plan to use it mostly as a pen, it doesn’t have a cover for the pen tip. But as a ball point pen, this shouldn’t be a major issue. However, this could be a minor nuisance for some people.

If you are looking for the best tactical pen, one that combines tremendous features, strong materials and great writing capabilities, then buy the 2cl direct tactical pen now.

Tactical pens are great tools to have, but not all tactical pens are the same. It is easy to spend money on something that doesn’t give you all you could get. If you’re spending extra money on a good pen, you want to be sure you are getting the best.

However, with so many different options on the market, finding the best tactical pen can be rather difficult. So we put our testing methodology to use in search of the best, and we found the 2cl direct tactical pen. It’s well-built, full of features and affordable, and it writes great.

To get a fantastic tactical pen to help you stay prepared for whatever emergency may come your way, get the 2cl direct tactical pen now.

First Aid for Cuts and Wounds: The ...