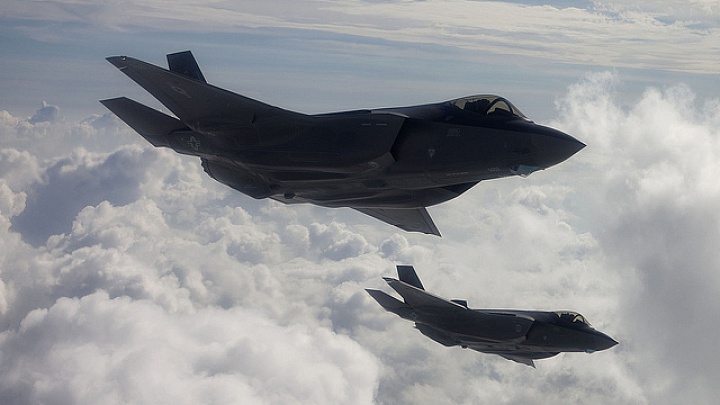 Despite continuing debate, it is inevitable that the F-35 will become America’s workhorse air platform. After billions spent on its procurement, the ageing of its current fleet, the lack of investment in developing alternatives, and given its capabilities applicable to the conditions of the current air campaign against ISIS in Iraq and Syria, the F-35 will and should become America’s central fixed-wing combat aircraft.

With more than 100 airframes in service to date, a project pipeline which has, for the most part, smoothed out significantly since 2012, not to mention the project’s colossal $400 billion cost to date, the idea that somehow the F-35 could yet be mothballed or cancelled has most likely passed beyond the realm of possibility. Policy minds are made up.

Western air combat fleets are ageing. Venerable as they may be, many of the platforms upon which policy-makers continue to rely for increasingly short-notice deployments are at the twilight of their operational lives. In many cases, the point is being reached where aircraft are reaching the absolute maximum of their often already-extended serviceable lifetime. Seeking to extend these airframes beyond these limits would prove a significant expense and could even endanger the lives of aircrew.

Despite its critics, there really is no alternative to the F-35. Adopting a “make do and mend” attitude will not keep aging aircraft operationally safe or fiscally tenable for long and almost certainly not as long as developing, engineering, and procuring a new capable replacement from scratch would require. Attempting to extend fleet life beyond its advisable limits while going back to the drawing board could create a dangerous “fighter gap” during which America’s current airframes could degrade faster than a new aircraft could be developed. While European air forces can fall back on other advanced aerospace defense projects such as the Eurofighter Typhoon, Rafale, or Gripen for example, if American procurement history is to be taken as an indicator of strategic culture, purchasing externally-developed, foreign aircraft to operate as the future backbone of American air power is simply not an option for the U.S.

The reasoning behind developing the F-35 as an advanced “5th generation” platform has always been relatively simple. The future battlespace does not take for granted the privileged operational position which NATO aircrew have recently enjoyed.

Western military powers have placed their eggs in the F-35 basket. It is frankly inevitable that the F-35 will become operational and it will almost definitely see combat. As such, a shift in the debate around this most controversial of aircraft is prudent. Questioning whether procuring the F-35 in the first place was a prudential decision is becoming a question for history. It is too late to stop now.

In order to keep the debate concerning the F-35’s strategic ramifications relevant, it is time to consider the operational picture which the F-35 will be a part of. Obviously, there is no crystal ball answer that can settle that question in the here and now. The war against ISIS being fought by the United States and its allies represents the kind of operation at which the F-35 can not only partake, but excel. Combat air strikes over Syria have already seen the deployment of the equally long-debated F-22, which naturally conjures speculation over prospective future operations for the F-35.

The reasoning behind developing the F-35 as an advanced “5th generation” platform has always been relatively simple. In order to retain dominance in the future application of air power, the United States and its allies must develop airframes which are capable of operating without the luxury of uncontested or unprotected airspace which has characterized the conflicts in Iraq and Afghanistan. Further, the adaptive and fluid capacities of likely future targets such as ISIS, must be met with improved targeting and observational capabilities. The projected future battlespace does not take for granted the privileged operational position which NATO aircrew have recently enjoyed. Rather, policy planners recognize the need to develop and adapt capabilities in order to retain the strategic edge.

Fighting ISIS in Iraq and Syria

Although undertaken simultaneously, airstrikes in Iraq and Syria should be considered two distinct operations, each possessing their own characteristics. While Iraq is quite familiar operational territory to coalition air forces which have patrolled them for most of the last 24 years, Syria remains something of an unknown. This is especially relevant with regards to the collection of intelligence necessary to guide bombing efforts, and the differences between operations in Syria and Iraq are palpable.

To offset the lack of real-time human intelligence, sensory equipment for reconnaissance, surveillance and target acquisition becomes increasingly important. The F-35’s Synthetic Aperture Radar (SAR) capabilities promise tantalizing possibilities, while network-enablement between platforms in real-time, if developed and operated efficiently, has the potential to yield great benefit in piecing together an effective offensive targeting plan.

Of course, technology pessimists will argue that no level of sensory development can prove more reliable than human confirmation of a target. They are, quite frankly, right. However, if operations such as those over Syria are an indication of things to come, human confirmation will be a luxury to combat aircrews. The sensory capabilities of advanced platforms such as the F-35 may well prove the only reliable means of attaining a full and proper understanding of the operational environment in the future. The development of such sensory capability is of tantamount importance to the future success of air operations.

The ability of aircrew to operate with impunity and in relative safety is as much a factor in potential future operations as intelligence and targeting. While foes such as ISIS have no air capability themselves, to infer from this that ISIS cannot pose a threat to military aircraft would be woefully naïve. In the last month alone, rotary and fixed-wing aviation assets belonging to both Iraq and Syria have been successfully engaged by extremist forces.

Naturally, this has led to a preference towards the utility of fast-jet aircraft operating at high altitude in counter-ISIS operations. Once again, this preference is notable in Syria, where the counter-air capacity of ISIS and other aggressors is largely unknown. As with targeting, the operational familiarity afforded aircrews in striking ISIS targets within Iraq affords a greater degree of flexibility and confidence in operations, hence the deployment of comparatively vulnerable AH-64 Apache gunships and the much-discussed A-10 Warthog to Iraq.

Of course, the risk to aircrew in Iraq is in no part offset by the capacity to undertake rescue and recovery efforts in the case of a loss of an airframe in combat. Given that strikes in Iraq have focused on supporting frontline combat operations, the likelihood of crew loss or capture by ISIS is weighable against the potential benefits to be gained from engaging ISIS at closer quarters. The results of the loss or capture of aircrew within ISIS-held Syrian territory does not bear thinking about. As such, the deployment of the Apache or Warthog over Syria which, while perfectly-suited to the role of close air support, are highly vulnerable to proven anti-air tactics operated by ISIS, remains a rather remote prospect.

The Future of Airpower

Military planners are criticized for missing the mark. In terms of air power doctrine, however, the general belief that aerial interdiction will become increasingly complex and dangerous is proving true. Over the last decade, airpower has enjoyed a significant level of freedom from viable threat in conflicts over Iraq and Afghanistan, with the notable exception of rotary aviation, accounting for 9% of all combat casualties to date in Afghanistan alone. Combat aviation however, especially fixed-wing variants, has been able to operate in these conflicts with high levels of impunity. As a strategically-minded opponent, ISIS has sought to counter this. It is to the credit of NATO and other western force analysts that they have taken into account the need to develop and improve airborne capability in order to retain this edge which has proven a decisive power in the West’s war-winning capacity in the post-Cold War era.

If interdictions in the style currently pursued against ISIS are to become the norm as strategic planners assert, the F-35 provides its buyers with the best operational capacity for success. Taking this and other factors such as the cost of procurement, time spent in development, and danger of creating a “fighter gap” into consideration, expect to see the F-35 become America’s workhorse in the air—maybe beginning soon over Syria and Iraq.