Disarming the Profession of Arms: Why Disarm Servicemembers on Bases? 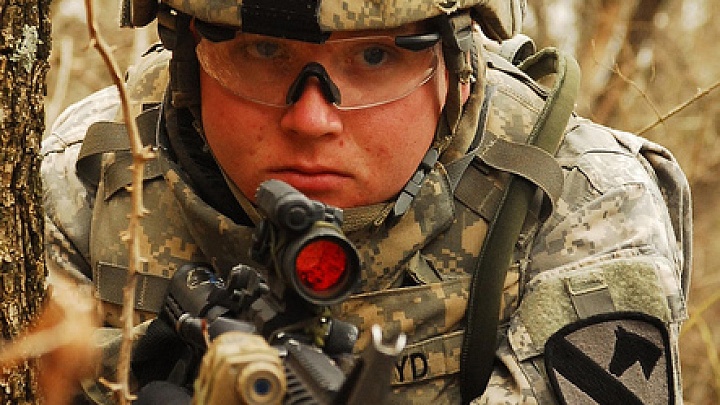 When you swear the oath to support and defend the Constitution of the United States in uniform you give up many of the rights guaranteed therein.  Freedom of speech, particularly of the political variety, is gone.  Search and seizure can be at the whim of the commander based upon probable cause that would be illegal outside the gates of our forts. In the draft era, even the basic “life, liberty and property” was subordinated to the Spartan needs of service to the nation.

We accept these realities as part of our responsibility to the document we proudly defend. However, perhaps unknown to the general public, servicemembers’ right to possess, store, and carry personal firearms, on and off post, is much more restricted than any American civilian’s right to do so. In a time when American servicemembers are being specifically targeted at home and at military installations, limiting their right to keep and bear arms—a right still granted to every other citizen not in uniform—no longer makes sense.

Military servicemembers and their families are directly threatened by various permutations of Jihadi Islam.  The threat is legitimate and demonstrable; Tennessee, Canada, New Jersey, Arkansas, and, of course, Fort Hood, Texas.  The military’s response to these attacks is sadly predictable.  We will tighten security on the various bases and forts, which in turn makes them, and the soldiers within, increasingly inaccessible to the general public.  The troublesome divide between the nation and the men and women who defend it will become wider and deeper.  To the senior officers of the military who invariably live on these well-defended military installations, I am sure these actions will appear to do something to safeguard the men and women they command.

In what will become an iconic photo in the gun rights community, the bullet holes surrounding the gun-free-zone sign at the recruiting station in Tennessee perfectly illustrates the foolishness of such zones.

These assumptions would be wrong.  Obviously these actions would have done nothing to protect the marines and sailors slaughtered unarmed in Tennessee.  And it will do nothing to counter the insider threat personified by Major Hassan and Sergeant Akbar.  Aside from the nearly one best online casinomillion reservists who, of course, live in the local community, a huge percentage of active military members live outside the fenced and guarded bases.  No amount of passive defenses can protect our service members and their families from attacks emanating domestically.  Only the active measure of arming our men and women, or, at the very least, allowing them to arm themselves will provide the requisite security to reduce the threat significantly that all of us who serve in uniform face every day at home.

To the officers and non-commissioned officers, the right to arm themselves against threats should be unquestioned.  If incapable of carrying a side arm safely, they have no business being leaders in the profession of arms.  To the junior enlisted, if qualified on the type of arm they wish to carry, they should, by definition, be qualified to do so at all times.  If the level of training is insufficient, then that is the fault of the service that failed to qualify them properly.  This does not mean they must be issued the weapon, though that would be preferable in some cases.  Personally owned weapons should be sufficient.

In the past 20 years this country has undergone an experiment on the costs and benefits of letting Americans arm themselves discreetly.  The concealed carry weapon (CCW) permit is becoming ubiquitous in our country.  In some states, ranging from Maine to Arizona to Alaska, no permit is required at all.  The predicted bloodshed that many said would result failed utterly to materialize.  In fact, violent crime levels of all kind have dropped during this period.  Whether this drop is from causation or correlation is unknown.  What is known is that Americans have become safer at the same time more and more Americans have started carrying weapons in their own defense.  The idea that trained professionals would present a higher risk than the general population they defend fails the common sense test.

Despite the obvious nature of this solution, it will be predictably attacked by the senior leaders in the military.  This failure to trust the subordinates they trained highlights a different problem to be addressed at a different time.  But senior leaders who use their command authority to disarm the men and women they are responsible for must be held accountable the next time our men in uniform are slaughtered; unarmed and defenseless.

In what will become an iconic photo in the gun rights community, the bullet holes surrounding the gun-free-zone sign at the recruiting station in Tennessee perfectly illustrates the foolishness of such zones.  While the debate has often centered on schools, where the mix of children and firearms adds an understandably emotional concern, the idea that men and women who have trained in the profession of arms must be treated like children is indefensible.  In the predictable absence of a call from our military leadership, it will be incumbent upon the civilians who thankfully wield ultimate power over the military to allow us the right to protect our families, ourselves, and our fellow Americans from the threats we tragically face at home.

Death by Treasury: The Challenge of Defense ...