How War Has Shaped American Exceptionalism 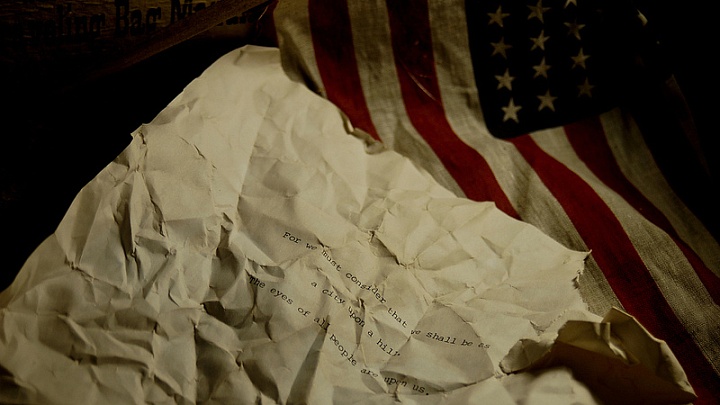 War is the most unifying, and yet simultaneously divisive, of all human activities. Democracies justify acts of war through the utilization of powerful discourses intended to mobilize mass public opinion. Discursive strategies are unique to each state, and depend upon cultural and historical factors. So-called “American Exceptionalism” not only lends legitimacy and meaning to foreign policy and war, but also to the actions of individuals—including politicians and soldiers. American Exceptionalism had great effect on the discourse surrounding the conduct of military operations, especially counterinsurgency operations (COIN) during George W Bush’s Global War on Terror (GWOT). But what is it precisely, and is America moving beyond its post-9/11 era of ethnocentricism?

Are All Societies Exceptional?

The phrase is not without controversy. In short, American Exceptionalism may be viewed as a superiority complex of sorts. A more academically satisfying definition has been offered by Robert G Patman, who describes it as, “…an informal ideology that endows Americans with a pervasive faith in the uniqueness, immutability and superiority of the country’s founding liberal principles, and also with the conviction that the USA has a special destiny among nations. This faith does not on itself constitute an ideology. In Strategy and Ethnocentrism, Ken Booth argues “societies look at the world with their own group as the center, they perceive and interpret other societies within their own frames of reference, and they invariably judge them inferior. In other words, a superiority complex is not the sole predicament of the U.S. What makes Americans different is not the belief that they are better, but the actions which are brought about as a result of this belief. The conviction that America has a “special destiny” is what defines American exceptionalism as an ideology. A recent example of this ideology being utilised was in September 2013, when President Obama professed the responsibility of the U.S. to react to the use of chemical weapons in Syria, concluding, “That’s what makes America different. That’s what makes us exceptional.” Presumably our ability not to follow through on this pledge also makes us uniquely American and exceptional.

Indeed, central to this ideology are the values of freedom, democracy, and morality. Countless U.S. presidents have defined America’s role in a conflict by utilizing these three values to their fullest because they carry so much weight in political discourse. On America’s entry into World War I, Woodrow Wilson talked of the need to “make the world itself at last free”; Franklin D. Roosevelt defined American involvement in World War II as a choice between “human slavery and human freedom”; and John F. Kennedy’s famous “pay any price, bear any burden, meet any hardship, support any friend, oppose any foe to assure the survival and success of liberty” was his Cold War rallying call to America.

Freedom is such an important element in American identity because of the historical narrative of the United States as a nation.  “America,” Michael Foley explains, “is often reputed to be the first entirely new nation, free from the past, free from historical processes, and, therefore, free from the intractable restrictions upon liberty found elsewhere.” Due to the revolutionary nature by which America won its independence, freedom became the all-important value by which Americans defined themselves.

As such, democracy is frequently seen as synonymous with freedom in the American political discourse as it is seen as the truest political and philosophical embodiment of freedom. It is through democracy that the American ideology truly sees itself as exemplary. America’s spread of democracy accelerated massively under Kennedy in the early 1960s in what was known as his Development Policy. The problems with this policy,  Michael H. Hunt argues, were two-fold: First, the need to bring a country into the America’s sphere of influence and away from left-leaning tendencies sometimes meant that the U.S. backed their own dictators at the expense of the liberty and democracy which informed their ideology; and second, development policy was inherently “condescending and paternalistic” since it relied on the ethnocentric assumptions that came with judgments of modernity and progress. Further, America’s confidence and unwavering belief in its own political system led to an air of benevolence when it came to matters of development in the Third World.

The most striking element of America’s foreign policy is that it is without exception framed in terms of a moral duty. As Seymour Martin Lipset has argued, “Americans must define their role in a conflict as being on God’s side against Satan –for morality, against evil”, and America, he adds, is “the most moralistic country in the developed world.”

The place of moralism has its origins in the historic religious experience of the United States. Foleyexplains that the New England Puritans believed that their departure from the Old World of Europe to the New World settlements in America constituted “wholly exceptional monuments to biblical ordinance and divine grace.” From this belief came a national narrative of being the ‘chosen people’, which then helped determine America as a “city upon a hill”, where the “eyes of all people are upon us.” Here we see the origins of the missionary zeal in American exceptionalism, which has reinforced and complemented other elements of it and which has continued to influence American foreign policy at least since WWII.

Moral absolutism is one of the most noticeable discursive elements of American exceptionalism, and tended to especially characterize the lead up to the GWOT.

The symbolism of the 9/11 terrorist attack targets cannot be overstated: the World Trade Center embodied the sheer economic power and omnipotence of American neo-liberalism; the Pentagon, the home of the U.S. Department of Defense (DOD), represented the unrivaled size and strength of the American military. The Bush administrations response famously became known as the Global War on Terror (GWOT), set out in a series of speeches and in the 2002 National Security Strategy of the United States of America (NSS). Operation Enduring Freedom (OEF) and Operation Iraqi Freedom (OIF –note the use of the word freedom to label both wars) were initially both successful in a strict military sense –regime change was swiftly and efficiently completed in both Afghanistan and Iraq. However, the attempts of American foreign policy to politically reshape these regions by military might has had the effect of further destabilizing the region.

The fair treatment of non-combatants in war is not only morally required, but is also codified in international law and widely accepted as militarily prudent. Michael Walzer notes the argument of Henry Sidgwick, who stated that it was impermissible to do “any mischief which does not tend materially to the end [of victory], nor any mischief of which the conduciveness to the end is slight in comparison with the amount of the mischief. The margin for “mischief” in Counterinsurgency (COIN) wars such as those fought by the U.S. in Afghanistan and Iraq becomes very small indeed, because, to quote the 2006 U.S. Army/Marine Corps COIN Field Manual (FM), “preserving noncombatant lives and dignity is central to mission accomplishment.

The utility of discipline is further intensified when we consider the professed purpose of the GWOT: To defeat global terrorism. By treating civilians poorly, the strategic goal of defeating terrorism is made significantly more difficult. To again borrow Sidgwick’s argument, the utility in reducing or eliminating “mischief” is to reduce the “danger of provoking reprisals and causing bitterness that will long outlast”. Atrocities or perceived injustices only fuel negative sentiments and therefore make peace and security more difficult. This has an effect that is not dissimilar to a self-fulfilling prophecy: A “false definition of a situation which makes the originally false conception come true.

If we also take American exceptionalism as a form of ethnocentrism, it is interesting to note Booth’s argument that “[e]thnocentrism is characteristically associated with the phenomenon of the self-fulfilling prophecy,” where a highly ethnocentric group “may actually seriously decrease their overall security by increasing the number of dangerous situations in which they get involved.

“American exemptionalism” was coined by Michael Ignatieff, and referred to by Harold Hongju Koh, who said it was the “ways in which the United States actually exempts itself from certain international law rules and agreements, even ones that it may have played a critical role in framing.” The 2002 NSS announced that it did not recognize the jurisdiction of the International Criminal Court (ICC) over Americans, and thus refused it the power to enforce the Geneva Conventions and Protocols on U.S. military personnel. According to Human Rights Watch, this flouting of international human rights law was a direct cause of the abuse of prisoners at Abu Ghraib and at prisons in Afghanistan. There is plenty of evidence that there was a culture of impunity. To take one example, Specialist Patrick Resta, a National Guardsman who served in a small prison camp in Jalula, Iraq, was told by his supervisor, The Geneva Conventions dont exist at all in Iraq, and thats in writing if you want to see it.”

Moral absolutism is one of the most noticeable discursive elements of American exceptionalism, and tended to especially characterize the lead up to the GWOT. One of the worst decisions in the entire war was to disband the Ba’ath Party and the Iraqi Army after they were defeated. Donald Rumsfeld has since said that “de-Baathification” was “akin to the Allies’ de-Nazification policy in Germany after World War II”, while the disbanding of most of the 400,000 strong Iraqi Army was not a decision “that stuck out at the time.”

Toby Dodge has argued that the Bush administration understood the Baath party and Sunni community through a “diabolical enemy image schema,” and as a result, felt obliged to “de-baathify.” In an influential essay in Military Review, Brigadier General Ailwyn-Foster criticized the way the U.S. forces thought that the “only effective, and morally acceptable, COIN strategy was to kill or capture all terrorists and insurgents,” and that U.S. military personnel had a “strong sense of moral authority” and a “sense of moral righteousness,” which made them “fervently believe in the mission’s underlying purpose, the delivery of democracy to Iraq.”

American Exceptionalism during George W. Bush’s presidency cast a long shadow on the discourse legitimizing and justifying America’s war in Afghanistan and Iraq, as well as on the conduct of counterinsurgency operations. The withdrawal of U.S. forces from both theaters was so difficult to stomach for some Americans not only because of the unclear gains we made reinforced by the renewed presence of Islamist extremists in Iraq but also because to retreat is almost to tacitly admit that Americans are not exceptional.