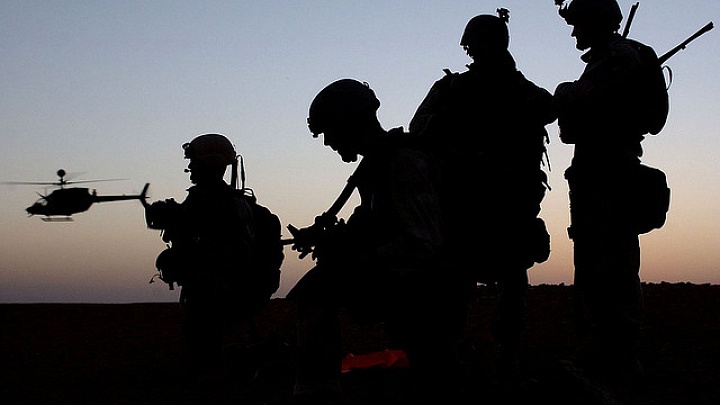 The rhetorical war over expanding direct U.S. military intervention into Syria—this time against the Islamic State of Iraq and Syria (ISIS)—has once again reached a boiling point. And in the long shadow of the Iraq War and its associated catastrophes, it is no surprise that the language of Realism is being deployed by those seeking to influence the debate against further involvement. With its vocabulary of prudent restraint, realist perspectives appear to resonate not only with a war-weary U.S. public but President Obama himself. Their argument boils down to this: While it is a brutal terrorist organization, ISIS fighters are not, as Harvard’s Stephen Walt put it, “the Four Horsemen of the Apocalypse” that U.S. officials and a hyperbolic cable media culture have portrayed them to be. Despite the group’s savage self-depiction and gruesome murders of civilians, according to realists like Paul Pillar, Washington needs to maintain a capacity for “cool-headed deliberation” to contains this threat rather than exacerbate a conflict situation in where we have little control and limited strategic interests.

Yet, for realist arguments that focus so heavily on the potential risks of intervention against ISIS, they conveniently elide or downplay the damaging consequences from maintaining the status quo. The conflict trajectories in Syria and Iraq are remorselessly marching towards one of two possibilities if the U.S. continues its policy of “strategic restraint”: The first is that local actors, primarily the Syrian and Iraqi governments, Kurdish politico-military groups, and the Iranian regime, summon the will and capacity to defeat ISIS. While a low-cost solution (for the U.S.) to neutralize the ISIS threat, the reality on the ground suggests this to be highly improbable. The more likely outcome is that ISIS will continue to consolidate and govern its expanding “caliphate,” which realists believe is both containable and susceptible to collapse. Unfortunately, this assessment fundamentally misreads ISIS’s growing capacity on the ground and existing intent, which together pose a real national security threat to U.S. interests that requires intervention now before it is too late.

In a January 2014 interview, President Obama inauspiciously analogized ISIS to “the JV team” when he compared the militant organization to Bin Laden’s Al-Qaeda. Yet just four months later in late April, the “JV team” routed Al-Qaeda’s Syrian affiliate Jabhat Al-Nusra (JAN) in the province of Dayr Al-Zawr. This was a major strategic loss for JAN, as Syria’s eastern oil fields in the area were a major source of independent revenue. This pattern of local armed actors losing, often badly, to ISIS forces in areas of strategic importance extends to the Syrian and Iraqi militaries. It is true that the ISIS takeover of Mosul was enabled in part by local Sunni discontent against the Shia-dominated Iraqi security forces and the participation of other Iraqi Sunni insurgent groups such as JTRN (one of the Iraqi insurgent groups drawing from the discontent of Sunni ex-Bathists).

But it was ISIS alone that took over a series of Syrian-regime military bases in northeastern Syria late this summer, including the 17th Brigade base outside Al-Raqqa city on July 25, the 121 Regiment (i.e., Malbiya Regiment) in Al-Hasake governorate in late July, and the Tabqa Airbase in Al-Raqqa governorate on August 24. This quick series of victories stand in marked contrast to non-ISIS rebel achievements against the Syrian regime; despite controlling Al-Raqqa city and much of the province since February 2013, they were either unwilling or unable to overtake any of these Syrian regime positions.

Syrians I interviewed in Turkey, who despised ISIS as an organization, reluctantly admitted that the group’s governance structures were more than simply a component of a savvy media campaign.

This partial review of the conflict map highlights unwelcome realities for those hoping for a local response to deal with ISIS. The deterioration of state military forces, especially the Syrian army, has been severe. The Syrian regime’s operational dependence on Hezbollah and Iraqi Shia militias, the substantial defections of mainly Sunni soldiers to the armed opposition, and the cumulative attrition from battling rebel groups across the country for several years all put into question the idea that the Syrian regime would be an effective partner in battling ISIS and retaking lost territory (Of course, the reputational costs of a U.S. partnership with the Syrian regime—a policy some former US diplomats have proposed—that is actively committed to an ongoing mass murder and displacement of civilians, would be severe). Even the highly respected Kurdish peshmerga forces in Iraq lost territory to ISIS until they were 20 miles outside of Erbil, which then triggered limited U.S. airstrikes.

It has also been clear for some time that the Syrian regime and the Kurds are unwilling to commit serious resources against ISIS outside their base of support, which relegates much of eastern Syria and western Iraq to minimally contested ISIS control. In light of this fact, other commentators, including Paul Darling in this magazine, have proposed encouraging Iran to step into the breach and fight it out with ISIS. But this most realpolitik of arguments does not factor in the unintended consequences of further exacerbating the Sunni-Shia conflict. A sustained, direct Iranian role in fighting ISIS will inevitably tempt the Arab Gulf States to do even less to restrict jihadi financial networks in their countries from transferring funds into ISIS coffers in order to bleed a strategic adversary. Moreover, a frontline Iranian role will only solidify Iraqi Sunni support for the group, which has been instrumental in ISIS’s success in Iraq and the continued breakdown of the Iraqi state.

Let the Caliphate Fail On its Own

If local actors seem both unwilling and unable to face down the ISIS threat, then the remaining alternative is to let ISIS try to manage its newly established “caliphate.” Former CIA official Paul Pillar has recently summarized this position:

Traditionally an asset that non-state terrorist groups are considered to have, and a reason they are considered (albeit wrongly) to be undeterrable is that they lack a “return address”. To the extent ISIS maintains a mini-state in the Middle East, it loses that advantage. Any such mini-state would be more of a burden to the group than an asset… The place would be a miserable, ostracized blotch on the map with no ability to project power at a distance.

At the core of salafi-jihadi movements’ success is the transformative role that violence plays in mobilizing individuals and communities around what were once unacceptable (and unimaginable) social norms. Without being propelled forward by violent territorial expansion, an isolated ISIS mini-state could quickly unravel. Unlike Al-Qaeda, however, ISIS has invested heavily in establishing rudimentary governance mechanisms. Syrians I interviewed this past summer in Turkey, all of whom despised ISIS as an organization, reluctantly admitted that the group’s governance structures were more than simply a component of a savvy media campaign; ISIS regularly collected taxes, adjudicated local disputes, attempted to improve essential services, and worked to convince experienced local civil administrators to stay in their positions through continued payment of salaries. Through these activities ISIS developed diversified sources of revenue, including indirectly from the international community. Syrians involved in transporting humanitarian aid into northern Syria noted that ISIS was the least corrupt actor in terms of allowing international aid to be distributed to local communities under its control (rather than appropriated by armed men staffing checkpoints as is often the case in non-ISIS areas), which generates a degree of popular support from a Syrian population at odds with their ideological extremism.

Some commentators have hoped that this extremism will spark a popular backlash. But in other civil wars where insurgent groups were committed to ideologies far more radical than the local community, it has been the society rather than the organization that has adjusted their beliefs and behavior (The Shia community in southern Lebanon is a good example of this phenomenon, which had strong leftist and Communist affiliations immediately preceding the rise of Hezbollah in the early 1980s). The threat of this “mainstreaming” of extremist views in the center of the Arab world is not factored into Pillar’s analysis, nor are other costs ISIS rule will entail. The consolidation of an ISIS territory is the guaranteed elimination of large swaths of cultural history and the cleansing of all minorities unfortunate enough to fall within the caliphate’s contours. While not a narrowly defined American interest, political pressure will continue to build for U.S. intervention as the international community watches a deliberate process of cultural destruction and ethnic cleansing in real-time through the lens of ISIS’s slick media production.

Realist arguments also underestimate the threat posed by ISIS to recruit and deploy hundreds of committed militants if the organization is allowed to maintain control of substantial territory. ISIS’s ideology is fueled by the lived reality and production of violence, and a decision to eventually target the West is part and parcel of its fundamental principles. Additionally, the organization’s location in Syria and Iraq provides a much more convenient staging ground for attacks against the West than Marib in Yemen or Mali. It is why ISIS has been able to recruit so many fighters from Western countries. Just as the barriers for would-be jihadis to enter Syria are too low, the barriers to prevent them from returning undetected to execute attacks are not nearly high enough, and this risk is compounded by the increasing number of foreign fighters that have arrived over time.

Ultimately, ISIS is a national security threat to the West because its end goal is not the overthrow of a particular Arab regime or control of a specific country, but a violent reckoning with the global political order. Mobilized by a nihilistic creed and empowered by an operational capacity that is overwhelming exhausted Syrian and Iraqi military forces, ISIS is not “containable” without U.S. military intervention. The concept of “strategic restraint” may be popular in the current U.S. political climate, but it will only end up increasing the potential for successful ISIS actions against American targets and interests in the future.

Michael Page is currently a graduate student at the Harvard Kennedy School. He has been a project manager with the research and stabilization consultancy ARKand has spent significant time working in Lebanon, Syria, Yemen, Turkey, and other countries in the Middle East.

For Refugees in Turkey, A Tipping Point ...