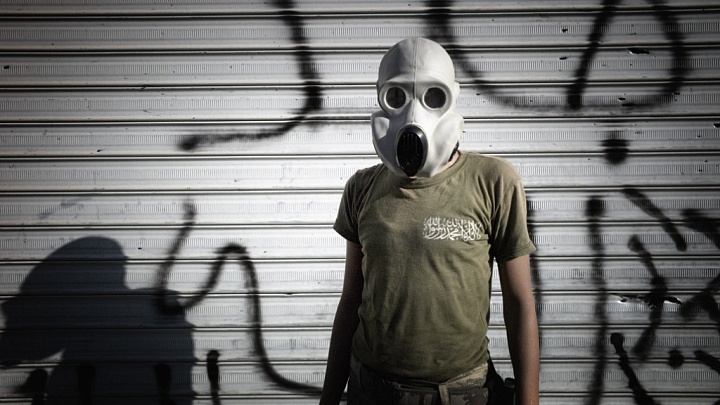 On 21 August 2013, a chemical attack killed hundreds, possibly more than a thousand, in Ghouta, a district of Damascus. We now know, through medical and environmental samples collected by a joint mission of the United Nations (UN) and Organization for the Prohibition of Chemical Weapons (OPCW) that the nerve agent Sarin – the same gas used in the 1995 Tokyo subway attack – was the culprit and delivered by 140mm and Volcano rocket systems. The attack is a war crime. The use of chemical weapons is prohibited by the 1928 Geneva Protocol, and the targeting of civilians is considered a crime against humanity. In a perfect world, a criminal investigation would occur, followed by a trial in the International Criminal Court.

The vast majority of the evidence, however, is withheld from public review by the OPCW as states party to the Chemical Weapons Convention (CWC), such as Syria, are granted confidentiality for their disclosure documents. Nonetheless, slender scraps of evidence have made their way into the public domain or have leached out over time into public view. These pieces are revelatory if one knows what to look for. The most interesting of them is a chemical called Hexamine. It may point the finger at Bashar al-Assad’s regime as the perpetrator of the August 21st chemical attacks in Syria.

A commercial and industrial chemical, Hexamine has many uses, such as a corrosion inhibitor, a fuel for heating and cooking, and as an ingredient for some types of conventional explosives.  Until this present affair, however, the use of hexamine in any kind of chemical warfare agent manufacturing was limited to its brief use as a possible anti-corrosion additive in Levinstein Mustard? and older and long obsolete chemical warfare agent, so obsolete in fact that even by the 1930s it was considered to be a relic.

In November, the OPCW issued a document called a Request for Expression of Interest for the disposal of chemicals from Syria.  This document described the OPCW’s requirements to safely eliminate various chemicals from the Syrian government’s chemical weapons program.  The serious high-grade chemicals, such as chemical warfare agents themselves and immediate precursors, are not listed. This is evidently because, by CWC rules, they cannot be given to contractors for disposal as that would constitute an act of proliferation.  So this document represents an effort to eliminate the various feedstock, additive, and waste chemicals that represent less of a proliferation hazard.  For example, the list contains 30 tons of Phosphorous Trichloride, an early feedstock chemical in many of the production methods for making Sarin.  More interestingly, the list also included 80 tons of Hexamine.

The evidence is compelling. The presence of Hexamine strongly indicates that Syrian government forces conducted the lethal chemical weapons attacks at Ghouta on 21 August 2013.

Drawing on knowledge of how the CWC is written and understanding how the OPCW works, supported by the opinions of former-OPCW official Ron Manley, some points should be clarified:

The joint UN/OPCW mission collected a number of biomedical and environmental samples at Ghouta, Syria.  The results are reported in great detail both in an interim report and a final, more detailed report.  Blood samples, analyzed by a highly specific and sensitive technique known as fluoride reactivation, revealed that people in Ghouta had definitely been exposed to Sarin.

This particular revelation removed the mystery as to what chemical agent was used.  The environmental samples were similarly revelatory for four reasons.  First, actual Sarin was found in some of the samples. Second, the Sarin was found in places where it would be expected to be found after days of exposure to the environmentin places where it would have avoided evaporation or complete degradation.  Third, a much wider swathe of samples contained material that was either a general or a specific degradation product of Sarin.  Fourth, there was an interesting mix of chemicals also found in and around the rocket impact sites, like the chemical DIMP, a known by-product of Sarin manufacturing and an expected contaminant in any low or mid-grade Sarin process. Hexamine was also found in every sample but one where Sarin and/or Sarin degradation products were found. What is Hexamine doing in the Sarin? What is its purpose?

The Science Behind the Weapon

Hexamine, as one of the chemical family known as amines, can react with acids. Indeed amines in general are useful this way.  A basic explanation of the chemistry is helpful here.  Amine compounds contain one or more nitrogens attached to carbon or hydrogen. That leaves an unbonded electron pair on the nitrogen atom.  This is one chemical definition of a base. Those electrons will attract and bond with compounds or atoms that are deficient in electrons, like H+ (a hydrogen ion, proton), which is characteristic of common acids like HF. H+ is missing a pair of electrons. These definitions of acid and base can be found in elementary chemistry text books.  Hexamine contains four amine nitrogens. Each of those nitrogen atoms can bond with one molecule of HF. Because amines are uncharged, they cannot simply bond with H+ as OH- (hydroxide, as one would find in lye as one example) would; the final molecule must be uncharged. So they bond with the entire HF, giving a fluoride salt (Or Hexamine-HF complex).I argue that Hexamine was used to reduce excess acid produced as a byproduct of the Sarin manufacturing process. The OPCW refers obliquely in its own documentation that Sarin was kept as binary components by the Syrian authorities. The binary method often (but not exclusively) used to create Sarin reacts a chemical called methylphosphonyl difluoride (also known as DF) with isopropyl alcohol. One molecule of DF reacted with 1 molecule of isopropyl alcohol reacts with one molecule of Sarin and one molecule of hydrogen fluoride (HF.) Going by weight, this works out to 140 grams of HF for each 1 kilogram of Sarin produced.  HF is a highly destructive acid.  It can destroy the very vessel in which it is created and kill its handlers.  The protective equipment needed to protect a handler is much different than the equipment needed to protect from Sarin.  In both the U.S. and Soviet Union’s Sarin programs during the Cold War, grappling with the problems of excess acids in Sarin was a substantial undertaking.


If the Syrian regime used this process in producing the Sarin from the Ghouta attack, then the salts produced as a by-product are somewhere, part of a non-trivial waste stream, but they were not in the rocket or on the ground.  As this fluoride salt isn’t apparent in the field samples, it is further evidence that the Sarin was created in a production facility and not mixed in flight. Once detailed pictures of the Volcano rockets became available from November 2013, it became clear that the Volcano wasn’t a mix-in flight munition.

Another salient scientific fact is that solubility of Hexamine in isopropyl alcohol is lowtoo low for efficient use in a mix in flight rocket and that would rule the possibility out. However, the solubility issue is not any impediment to a process in a production facility.  So much cannot be said definitively of the 140mm rocket due to lack of an intact or semi-intact specimen. Nonetheless, there were not any strange salts, Hexamine, isopropylamine, or other related substances at the one 140mm rocket impact site examined by the UN/OPCW team.  The Hexamine found at the scene was likely residual Hexamine left in the mix.

With assistance of others, I have worked out at least one process that would produce Sarin using this method, but it would be dangerous, unethical, and possibly illegal to publish such a process. Hexamine is not previously noted in the open literature for use in Sarin production, although it should be stated that the large majority of knowledge of the manufacture of chemical warfare agents is not freely available and much of this information is classified.  The use of other amines is known. The U.S. nerve agent production program, at various points, used amines, such as tributylamine (U.S. stockpile Sarin contained an average of nearly 2% tributyalamine) and  isopropylamine (used in the U.S. M687 binary Sarin artillery shell) to deal with acid.

Hexamine was likely used by the Syrians for the same general purpose – scavenging acid.  Hexamine can bind with up to four HF molecules, is cheap, is easily produced, is less of a fire hazard, has longer shelf life, and does not set off alarms in nonproliferation circles, unlike, say, tributylamine which is tracked on watch lists.

At a later date, Mr. Gwyn Winfield, editor of CBRNe World magazine conducted an interview with Dr. Sellstrom, which included this exchange:Having originally broached the idea in an article in NOW Lebanon in December 2013, I carried out in-depth research on the use of Hexamine as an acid reducer in Sarin (as I told the New York Times in an interview.) An appropriate question was put to UN/OPCW mission members in at a U.S. Congressional hearing. Ake Sellstrom, chief of the UN/OPCW mission to Syria and Scott Cairns, his deputy, stated  the use of use of Hexamine in the process which produced the Sarin used in the Ghouta attacks is a possibility.  It is clearly stated on the video of their testimony from 4:52 onward.

Winfield: Why was hexamine on the list of chemical scheduled to be destroyed it has many other battlefield uses as well as Sarin? Did you request to put it on the list or had the Syrian’s claimed that they were using it?

Sellstrom: It is in their formula, it is their acid scavenger.

Although various detractors have claimed that this quote is fabricated,  the author has confirmed it generally with Dr. Sellstrom and specifically with Gwyn Winfield, who has a recording of it.

The evidence is compelling. There is Hexamine in the samples at Ghouta and elsewhere, Hexamine in the Syrian government warehouses, a declared production process for Sarin inspected by the OPCW, and strong indications from OPCW sources of Hexamine being used in some way in Syria’s Sarin production. A clear hypothesis begins to emerge, though not always shared by others and sometimes vehemently disputed. The presence of Hexamine at the site of the Sarin attacks together with the Syrian government’s official declaration to the OPCW of their Sarin production process and related possession of Hexamine—along with other evidence—strongly indicates that Syrian government forces conducted the lethal chemical weapons attacks at Ghouta and elsewhere on 21 August 2013.

Is Iraqi Kurdistan on the Verge of ...

How War Has Shaped American Exceptionalism