Death by Treasury: The Challenge of Defense Austerity in Britain 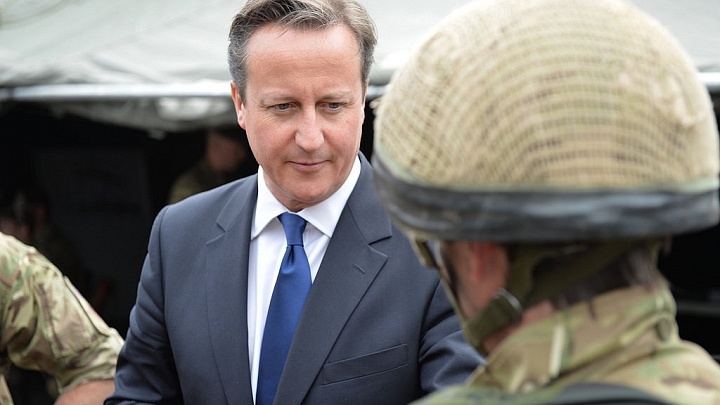 Last week, Britain’s Chancellor of the Exchequer, George Osborne, made the surprise announcementthat the Conservative Government would commit to spending 2% of GDP on defense, the aspirational target of all NATO countries. In effect, in what was a Budget revolving heavily around the standard of living in the UK, the Ministry of Defence became a “protected department” which would not suffer any more major cuts. While this may be welcomed at home and abroad by those concerned with Britain’s seemingly shrinking global presence, it is only the first litmus test this year for the new Conservative-majority Government.

In 2010, when the Conservatives were in Government with the Liberal Democrats, defense cuts were inevitable with the austerity programme which almost defined the Coalition Government. But with low-cost initiatives and words like ‘efficiency’ being thrown around, it was claimed that only dead weight was being cut from the defense budget. A National Security Council (NSC) was set up to work out how best to deliver national security in the current economic climate, conducting National Security Risk Assessments to determine what threats should be given priority. The NSC also oversaw the creation of a National Security Strategy (NSS) and Strategic Defence and Security Review (SDSR), both in 2010, with both to be renewed every five years and a Parliamentary Committee being set up to scrutinise the former.

The upcoming National Security Strategy and Strategic Defence and Security Review will be key tests to show that the Conservative-majority Government is competent on defense matters, but this will require a substantial reality-check.

Despite these initiatives, with the cuts to the Ministry of Defence’s budget over the last five years it is difficult to go a week without a senior journalist, politician or former member of the military questioning Government policy. While pledging to meet the 2% target will quiet some detractors, it is clear that not everyone will be silenced, with many believing that the issues with Britain’s defense policy are more than simply budgetary. The upcoming NSS and SDSR will be key tests to show that the Conservative-majority Government is competent on defense matters, but this will require a substantial reality-check.

Grand Strategy and the NSS

With accusations at home and abroad that Britain is withdrawing from the world stage, questions have certainly been asked of the UK’s strategic direction. The 2010 NSS, despite its name and dominant role in setting the security agenda, does not offer much in the way of strategy. Political doublespeak dominates the document, with it being declared that “the National Security Strategy of the United Kingdom is: to use all our national capabilities to build Britain’s prosperity, extend our nation’s influence in the world and strengthen our security.” Such a strategic declaration is flexible to the point of meaning nothing at all. Elsewhere, the document is dominated with highly reactive assertions that the UK will meet thatthreat with this, with little scope for where this fits into any grand strategic narrative. As the Joint Committee on the National Security Strategy aptly noted earlier this year, “we believe the National Security Strategy needs to be more strategic.”

Despite these flaws in the document which should define Britain’s grand strategy and military spending, David Cameron has stated it only needs a “refresh,” whereas the Committee has declared that it requires a “thorough revisit” and stated that the 2015 NSS will be needlessly rushed. The Committee also felt that and defense spending review should be based around the content of the NSS and not simply a figure that the Treasury gives the Ministry of Defence. As such, this has led some in Parliament to accuse the Government of wishing to deliver a “Treasury-driven [SDSR]” which ignores the NSS (as the SDSR is already in production). In addition to these flaws, a lot has changed in five years which may require the RSS to have more than just a “refresh” – the Arab Spring, America’s Pivot to the Pacific, China’s territorial ambitions, the increasingly unpredictability of North Korea under Kim Jong-un, the rise of ISIS and the decline of al-Qaeda, a (generally) more agreeable Iran under Rouhani and, of course, Russia and the Ukraine Crisis. The four high risk areas of terrorism, cyber-attack, international military crises and natural disasters are simply too broad and reactive. As the Committee noted, the Government should “make clearer statements on its geopolitical priorities as part of the next NSS, and to agree sub-strategies for key regions,” avoiding the political doublespeak which pervaded the 2010 NSS, blurring what the UK’s grand strategy is.

In this era of belt-tightening, it is a real concern that Britain may not be able to fight unilaterally and will require other nations’ military hardware to plug the gaps.

As Malcolm Chalmers of the think tank RUSI recently wrote, “since the formation of NATO in 1949…UK grand strategy has consistently been based on a permanent alliance and economic partnership with fellow democracies in the US and Western Europe.” While the 2010 NSS barely alludes to it, the Government is actually sticking to this rigidly, but this rigidity is producing negative consequences. It is allowing British Governments to avoid thinking strategically as it must reach strategic agreements with other NATO countries or the US before action is taken, rather than considering independently how Britain’s interests are served. The UK’s strategy must match up to its partners if it is to act effectively in the world. In addition, taking interdependence to its logical conclusion during austerity is creating operational issues.

Operations and the SDSR

Despite interdependence being a hallmark of Britain’s post-war grand strategy, the British Military has been able to fight on its own to secure UK interests, such as in the Falklands and Northern Ireland. But with the cuts over the last five years following the 2010 SDSR, interdependence is being deepened to a worrying degree; seemingly the only area where the UK holds firm on military independence is its nuclear submarine deterrent, Trident. In this era of belt-tightening, it is a real concern that Britain may not be able to fight unilaterally and will require other nations’ military hardware to plug the gaps (unless a full-scale nuclear attack is what is called for). In real terms, the UK’s defense budget shrank by about a quarter since the 2010 SDSR. The number of main battle tanks has been reduced by 41%, and there are now 25% fewer fighter and ground-attack aircraft, to name but a couple of platforms where cuts have been deep. Certain platforms have even been removed in their entirety during this period, such as aircraft carriers and maritime patrol aircraft – the UK is wholly dependent on allied states for these platforms. While new aircraft carriers are currently under production (but won’t be in service for a number of years), there are as of yet no plans to replace their retired Nimrod fleet. That being said, the Government has faced substantial pressure for a new fleet to be included in the 2015 SDSR later this year and there are high expectations that a replacement will be brought in.

In addition to this, some of the replacements which are due to come into service over the next few years have faced numerous issues and delays. The most obvious among these is the F-35 fighter, with its seemingly never ending saga of delays, additional costs and mishaps, as well as the debate now raging of whether or not it is actually better than previous generation fighters after it was beaten in a mock dogfight by an F-16. Britain’s order of a fleet of F-35Bs has understandably been in the spotlight and the 2015 SDSR will be under a great deal of scrutiny on this matter. At the same time, the renewal of Britain’s independent nuclear deterrent, Trident, is cutting into the defense budget drastically, further squeezing conventional forces as it is estimated to require a third of the defense procurement budgetfor over a decade. In addition, threats diversifying to include areas such as cyber security only mean that thinner slices of the defense budget pie are available to the Army, Royal Navy and RAF. As such, conventional defense forces are less capable of acting independently and are less valuable partners while acting interdependently within an alliance, such as NATO.

In the Government’s drive to interdependence, it is not just military platforms which are being cut, but also the skilled men and women who are required to operate said platforms.

The 2010 SDSR also paved the way for the future of shape of the British Military – Future Reserve 2020. This plan set out drastic reductions in the Army’s numbers (and, to a lesser extent, RAF and Royal Navy) and drastic increases to the levels of Reserves.  As well as the obvious concerns regarding part-timers filling the boots of full-time military personnel, such are the levels of these cuts that questions have even been raised as to whether or not the Royal Navy could man both of the aircraft carriers in production. The recruitment of Reservists is also slow and well behind Government targets due to both recruitment and retention issues, despite picking up in recent months. The Army even raised the maximum age of Reserve recruitment last year from 43 to 52 in an attempt to boost numbers. In the Government’s drive to interdependence, it is not just military platforms which are being cut, but also the skilled men and women who are required to operate said platforms.

The two most vocal camps in the debate regarding the state of Britain’s military and strategic thinking are, naturally, the two extremes – disillusioned former senior members of the Military chastising the Government for its cuts and Cabinet members who defend to the hilt their handling of the Military. While the former imagines a strong breeze could knock down the Military, the latter could imagine the Army marching on Moscow if it were so inclined. Both sides regularly trade blows in the press, such as in successive Saturday editions of the Daily Telegraph last month. Of course, they have their vested interests, whether they are securing the defense budget for still serving members of the Military or defending the Government’s record (at home and abroad) against unrelenting criticism.

If this debate is to advance, it must be more balanced. Yes, Britain has the fifth or sixth (depending on the measurement) largest defense budget in the world and operates extensively, but the Military is thinly spread in this era of diversified threats and tightened belts. Under these condition, the inclination to push interdependence to the extreme is tempting and RUSI’s Malcolm Chalmers believes that it is best to favour both quality and spectrum over quantity when it comes to defense spending. This, however, risks the possibility of being able to do everything as part of a coalition, but almost nothing when fighting alone, with major gaps in military platforms and a strategic deficit. In turn, this would wholly undermine the British Military should it act independently in a major engagement.

What Britain truly needs in this period are straight-talkers who do not grandstand, fear-monger or talk in political doublespeak, but engage with the realities of Britain’s defense – the UK needs both a clear strategy and a Military to match it. Striking a balance between the two will be the defense challenge of this Government and the upcoming RSS and SDSR later this year will be the next tests.

Disarming the Profession of Arms: Why Disarm ...