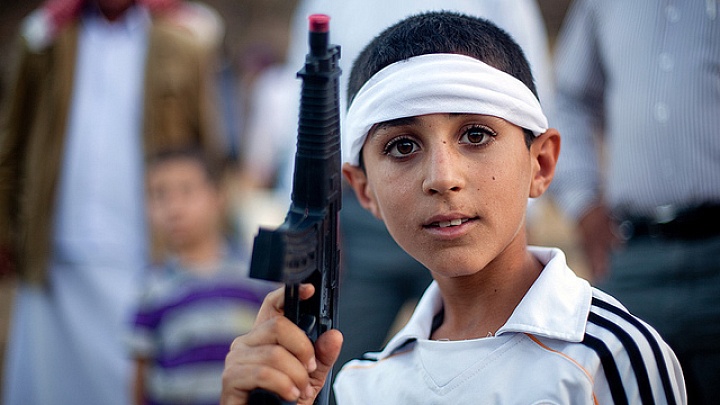 President Obama made clear this weekend that he foresees what could be months of strikes against ISIS militants who have taken over many major cities and large swathes of northern and western Iraq. They have left behind mass graves filled with as-yet uncounted bodies of civilians and Iraqi government security forces. They have summarily executed and driven thousands of Yazidi, Kurdish, and Christian refugees into the mountains ahead of them with little besides the clothing on their backs. The U.S. airstrikes will be accompanied by food, water, and medical supply drops to refugees who have fled into the barren countryside while Iraqi forces prepare a counterstrike against ISIS.

Many Americans, however, fear this operation may lead to large numbers of American ‘boots on the ground’ in Iraq again. Those worried should take heart that the United States previously conducted a very similar military and humanitarian relief action in Iraq. In 1991, Operation Provide Comfort successfully deterred or eliminated military targets, created a refugee ‘safe haven’, and provided humanitarian relief to refugees from the air. The U.S should apply a similar model today without any boots on the ground.


In 1980, Saddam Hussein invaded neighboring Iran, beginning a war that would be devastating for both countries and have repercussions for the Middle East region for years to come. As a result of this costly war, many Iraqi government troops ordinarily stationed in northern Iraq to keep the Kurds to heel were withdrawn to fight Iran. The result was more freedom for peshmerga in Iraqi Kurdistan and the growth of Kurdish nationalism in the region.

The two main Kurdish political factions, the Kurdish Democratic Party (KDP) and the Patriotic Union of Kurdistan (PUK), openly sided with Iran.  As the Iran-Iraq War was drawing to a close in 1987, Saddam appointed his brother-in-law, Ali al-Majid—‘Chemical Ali’—to lead a campaign against the Kurdish traitors. The campaign was called al-Anfal—‘the spoils of war’. Al-Majid directed Iraqi air forces to conduct poisonous nerve agent attacks against Kurdish villages, eventually killing up to 90% of the population by 1988. Saddam never forgot this betrayal and Kurds never forgot this slaughter.

On 2 August 1990, Saddam Hussein started another war—the Gulf War—by invading Kuwait. Following international condemnation and a swift, well-executed, and massive ground and air campaign, in February 1991 Saddam Hussein’s forces retreated northwards from Kuwait back into Iraq in utter defeat. Sensing that yet another disastrous war had weakened Saddam, and with, some would claim, encouragement from the United States, other Western states, and Arab neighbors, Shiites, Kurds and other oppressed groups in northern and southern Iraq rose up against him. Kurds referred to it as the National Uprising and Arabs called it the Sha’aban Intifada.  The rebels gained the upper hand against the severely weakened government forces in most major cities across Iraq outside of Baghdad.

But by April 1991 Saddam’s forces were able to turn the tide and regain control of the cities and countryside. The Shiite rebellion in the south, centered on Basrah and Nasiriyah, had been largely quelled. Though in defeat the U.S. led coalition barred Saddam’s fixed-wing aircraft from flying, the Iraqi armed used rotary-wing aircraft to great effect. His forces continued to massacre thousands of Shiites, Kurds, and other minorities, regardless if they had participated in the uprising or not. The full extent of the murderous crackdown would not become known until after Iraq Survey Group report following the 2003 Iraq War. As the 1987/88 al-Anfal campaign had already shown, Saddam was merciless against the Kurds and other minorities who rose up against him.

In March 1991, Saddam began a campaign of repression against the Kurds in northern Iraq, moving his remaining military forces—those not destroyed in Kuwait—northwards to focus on Kurdistan. In a speech, Saddam made clear he was ready to use aircraft, tanks, and chemical weapons (again) to regain control of Iraqi Kurdistan. As a result, as many as 3 million Kurds fled into the mountains, freezing in the winter cold, where thousands were reported to be dying every day.

Kurdish leaders appealed to the U.S. and NATO to intervene. As the death toll continued to rise and fears of a repeat of the al-Anfal campaign began to increase along with international condemnation, on 5 April 1991 the UN Security Council passed Resolution 688, calling on Iraq to halt its reprisals against the rebels. The same day, President George H.W. Bush authorized Operation Provide Comfort.

The idea of establishing a ‘safe haven’ in northern Iraq was originally a British idea that originated from Prime Minister John Major’s cabinet and was supported in the U.S. by then-Secretary of Defense, Dick Cheney. In total, 13 states contributed forces to the operation and 30 nations provided supplies. Some 40,000 troops would deploy to the region to participate.

The similarities between the dire and deteriorating humanitarian situation in northern Iraq in 1991 and today are striking. But the differences in the security situation tend to favor the U.S. position and any international partners it finds even more than they did in 1991.

By 7 April 1991, the U.S. military C-130 transport aircraft flying from Turkish airbases began dropping tens of thousands of tons of food, water, blankets, tents, medicine, clothes and other supplies to refugees in the mountains of Iraqi Kurdistan. U.S. Special Operations Forces were deployed on the ground to guide the air drops and to establish organized camps of Kurdish refugees along a corridor that straddled the Turkey-Iraq border. Soon afterwards, conventional U.S. and UK forces entered northern Iraq through this corridor in order to establish a forward headquarters for the operation and provide security for the Kurdish camps and drop zones from relief supplies. Coalition air forces patrolled the Northern No-Fly Zone to deter or close with Iraqi government aircraft entering the area. Once sufficient security had been established, the mission of organizing and distributing aid to refugees was handed over to civilian aid agencies, such as the Red Crescent Society.

With the humanitarian crisis averted and Saddam’s forces sufficiently deterred from undertaking any reprisals against the Kurds in the northern ‘safe haven’ and Kurds able to return to their villages, all ground troops were withdrawn and Operation Provide Comfort was brought to a close in July 1991. Saddam’s forces withdrew completely from Iraqi Kurdistan in October, 1991 and the region has been generally autonomous since then. Operation Provide Comfort was succeeded by Operation Provide Comfort II and Operation Northern Watch, both military campaigns—as opposed to a humanitarian intervention—which sought to enforce the No-Fly Zones of Iraq and maintain the ‘safe haven’ in northern Iraq. U.S. and allied forces continued to patrol the airspace above northern Iraq until the 2003 U.S. invasion.

As a whole, the operation was deemed a great success. It has been held forward, along with the Gulf War, as a textbook example of joint operations among U.S. forces, with almost seamless participation and command and control between U.S. Army, Navy, Air Force and Marine Corps forces, as well as joint international operations with both NATO and non-NATO military partners. It also represents a great success in terms of coordinating a humanitarian intervention between civilian and military national authorities and non-governmental relief agencies. On the negative side, as relayed by Tom Ricks in Fiasco, it likely also served as a model for Paul Wolfowitz and Donald Rumsfeld’s ideas of ‘dynamic maneuver warfare’ misused in their later wars in Afghanistan and Iraq.

The similarities between the dire and deteriorating humanitarian situation in northern Iraq in 1991 and today are striking. But the differences in the security situation tend to favor the U.S. position and any international partners it finds even more than they did in 1991. The size of the humanitarian problem is not as large. Instead of 3 million Kurds in the winding and remote mountains in freezing winter conditions, an estimated 15,000 Yazidi refugees are surrounded by ISIS militants on Mount Sinjar in the summer sun. For them the situation is equally dire, but for the U.S. the problem is certainly smaller. However, the situation across Iraq can grow worse if ISIS is able to continue its advances in places like Irbil and maintain its hold on territory it has already captured.

In 1991, Iraqi government forces were the enemy and operating on the ground or in the air there meant U.S. forces facing the threat of a conventional military armed with Warsaw Pact weaponry. Today, Iraqi government forces are also in need of rescue as much as the Kurds, Yazidis and Christians in ISIS-controlled territory. Though ISIS has captured U.S.-provided Humvees, armored personnel carriers, and tanks, they possess little in the way of weaponry that could seriously harm U.S. air power. Heavy U.S. airstrikes could—and should—destroy these ISIS-held vehicles to prevent them from being put to further use. Fortunately, ISIS forces have no significant source of surface-to-air missiles or other anti-aircraft defenses. Saddam’s forces did and even then the U.S. was able to eliminate them. ISIS is even less able to defend itself from U.S. airstrikes than Saddam’s forces in the 1990s.

In 1991, the U.S. decided it had to put ‘boots on the ground’ inside northern Iraq to secure drop zones, coordinate forward command and control, and organize and secure refugee camps. Today, the U.S. could coordinate, support or even transport Iraqi government forces by rotary-wing aircraft to places such at Mount Sinjar in order to fill that same role. It is their fight after all. This would negate the need to put new U.S. Special Operations Forces on the ground.

General Martin Dempsey previously spoke out against the idea of using U.S. airstrikes to combat ISIS when its onslaught began. This was largely because the U.S. did not possess the intelligence and capability to receive and act on targeting information without its own U.S. forward air controllers on the ground. To this point, ISIS militants appeared to be dispersing themselves throughout the countryside, making them more difficult to target. However, if ISIS militants are willing to surround a single location like Mount Sinjar or attempt a coordinated attack on major cities such as Irbil, this would be equivalent to sticking their neck out.

The problem of actually finding and fixing ISIS militants is greatly reduced when U.S. aircraft can circle on station above a target militants are attempting to attack. The hunter becomes the hunted. However, the strikes would be even more effective with forward air control provided by troops on the ground. The effect of U.S. airstrikes will be multiplied if they come in conjunction with ground assaults by Iraqi government forces. It would also provide a psychological boost for Iraqi security forces who recently retreated in the face on ISIS onslaught, a reaction that had much to do with ISISs own psychological propaganda campaign of torture, be-headings, and hangings.

After a decade of massive investment of time, money, knowledge, and equipment into Iraqi government security forces, President Obama is right to be loath to put American troops in harm’s way there again. Regardless of one’s views as to how much of a duty America owes to Iraq, the deteriorating humanitarian situation calls for action. The terrain and conditions are fortunately familiar to America and the government and local forces are allies in need of help and not just bystanders we are going to ‘liberate’. It is a good omen that America has previously been successful from the air in the same place under very similar conditions during Operation Provide Comfort. It is right for America to strike murderous ISIS militants in Iraq and provide humanitarian relief to their victims. Such an intervention may save Iraq from complete collapse.

[Photo, of a Yazidi boy in the town of Lalish in northern Iraq, is courtesy of Swiatoslow Wojtkowlak via Flickr Commons.]