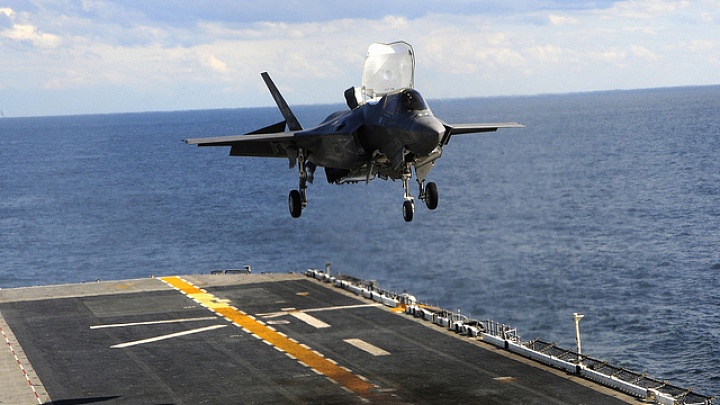 The “special relationship” with America is central to Britain’s national security and America also counts heavily on British diplomatic and military support. In an era of budget “austerity” in Britain and sequestration in America, there is great benefit for both countries when it comes to joint military operations and platforms procurement. The combination of budgetary factors, procurement costs and issues, and the continuing need for air and sea power is why the relationship between the U.S. and UK is so “special” that Britain’s next aircraft carrier, HMS Queen Elizabeth, will likely be home to U.S. Marine Corps F-35Bs American fighters flying from a British warship.

Twenty years ago the Joint Strike Fighter (JSF, now F-35) program came into being. The overall concept held much promise. It was a full-fledged restart of a failed concept of earlier years the F-111 program.   Against the backdrop of the Cold War, the idea emerged that a common airframe could be created that would meet the requirements of the U.S. Air Force, Navy, and Marine Corps.  All of the benefits of a common airframe, including commonality of parts support, especially for expensive avionics, would reduce per-unit cost while giving both the Air Force and the naval services variants that could meet everyone’s needs, whether landing smoothly on runways in Europe or performing arrested landings on ships at sea.

But the Marines eventually opted out and went the route of the Sea Harrier and proven fixed-wing performers like the F-4 and A-6. The F-111 concept did come to fruition and a variable-geometry strike-fighter was created with nuclear dash capability at supersonic speeds, but it failed its aircraft carrier suitability tests, thus becoming an Air Force-only platform. It seems the F-111 experience was forgotten by designers and program managers of the current JSF/F-35 program. This time, however, it was not just the Navy and Air Force, but also the British and the U.S. Marines who were affected by the high hopes about per-unit cost, commonality, and the answer to everyone’s problems.

Prior to 9/11, a debate emerged inside British defense circles about the next generation of the Royal Navy’s fleet, and it seemed the best template had already proven itself in spades in the post-Cold War world the aircraft carrier-centric U.S. Navy.  America had much success with catapult and arresting gear—“cat and trap”—aircraft variants. Broadly, this is a system that “catapults” an aircraft forward at high speed and, combined with the aircraft’s own power, allows it to take off at much shorter distances. Upon landing, an arresting system, or “trap,” slows the aircraft, allowing it to stop at much shorter distances.

The relationship between the U.S. and UK is so “special” that Britain’s next aircraft carrier, HMS Queen Elizabeth, will likely be home to U.S. Marine Corps F-35Bs until it fields its own.

America was quite successful in projecting power using “cat and trap” equipped aircraft carriers in operations ranging from Desert Storm (Iraq) to Allied Force (Kosovo). The Royal Navy had been deploying smaller, more-limited “jump jet” carriers.  The Royal Navy wanted to pursue “cat and trap” systems in their next generation fleet. However, due largely to anti-nuclear politics, these new carriers would not include one of the most useful technologies that had made U.S. carriers so flexible and independent their nuclear propulsion system.

Optimistic plans were made in London to take advantage of the promising American JSF program and outfit Britain’s newest carriers with the United States’ latest tactical aircraft.  Next generation carriers would combine with next-generation aircraft.  However, this original conception was changed, given that the U.S. Marines were going with a short-take off and vertical landing variant of the JSF the F-35B. This was more agreeable to HM Treasury, which had already balked at the cost of two new carriers and new fighters to outfit them, and would save the cost of developing and installing expensive arresting gear and catapult technology in their new carriers.  The Royal Navy went with the F-35B as well.

It was estimated that initial operational capability for both the new carriers and the new fighters would be 2008 or 2009.  However, deployment of the first of the new carriers, Queen Elizabeth, now will not happen until 2019 or 2020. One of the primary problems for the British has been the JSF program itself and this is a reflection of the American weapons program pathology that no program is good enough that does not encompass every expensive “bell and whistle” in the book.  When one designs a “jack of all trades” fighter, one must make all the trades happy – Air Force, Navy, Marines, and (lastly) the British. The JSF program reflects the problems of Congressional squabbling and the Military-Industrial Complex at its worst.

The Royal Navy was faced with the problem of having two new conventional aircraft carriers with no airplanes since the U.S. Marines bought up all the Sea Harrier Rolls-Royce engines to get a few more years out of their Harrier fleet as insurance against the delays in the F-35B variant. When delays developed (predictably) in the short-takeoff, vertical-landing F-35B, the Royal Navy decided to switch back to the initial idea, and go with the more expensive, “cat and trap approach” for the first carrier of the two, Queen Elizabeth.  By 2010, the UK had considerable sunken costs in the program and they plodded on in what seemed to be an unhappy path toward a return to British Sea Power.

However, in switching back to the F-35C and “cat and trap”, which now seemed less problematic than the F-35B, the British faced the problem and expense of fielding a new generation of catapult and arresting gear technology. It turned into another expensive program trajectory and two more years were wasted.  Then, just when the matter seemed settled, the troubled F-35B (short-takeoff, vertical-landing variant) was suddenly not so troubled anymore, its technological problems apparently overcome. However, it came with an expansion of the per-unit cost, of course.  Sea power comes at a price. But because the U.S. Marines have priority of delivery on the F-35B, the British will not get theirs until 2023, creating a “fighter gap” of several years.

But the Royal Navy must have an air-wing composed of more than just anti-submarine warfare helicopters.  This brings us back to the “special relationship.” In the spirit of cooperation between the U.S. and UK and their militaries that has continued since WWII (and because both nations have tied themselves to the troublesome JSF program), America and Britain appear to have found a joint solution. Thus, we have the interesting situation of potentially seeing U.S. Marine Corps aircraft deploying on the HMS Queen Elizabeth from 2018. U.S. Marines flying from a British warship that certainly is special.

Reports of Assad’s (Pending) Demise May be ...