Two Sides of the Vietnam War and its Personal Costs 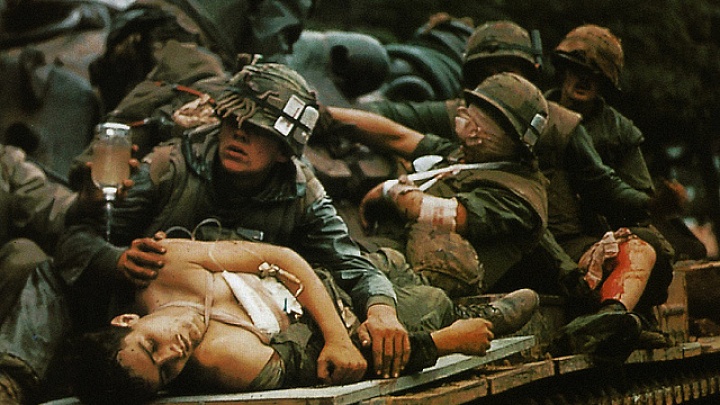 Wars end, but for those who live through them, they are not over. Thats the common thread in these two otherwise completely dissimilar books, one fictional and one not, both looking back at the Vietnam War and its aftermath. The Sympathizer, a brilliantly crafted novel by the Vietnamese-American writer Viet Thanh Nguyen, opens a window on the Vietnamese experience of that long conflict a window Americans rarely looked through, during the war or after. Michael Putzels The Price They Paid gives a gripping account of the war as it was fought by the pilots and crewmen of one U.S. helicopter unit, and shows how those harrowing experiences continued to shape their lives for years after they came home.

The Sympathizer begins in the final days before Saigons fall or liberation depending on which sides vocabulary you choose at the end of April, 1975. As the novel opens, its narrator, a young captain and an aide to a South Vietnamese general, is assigned to approach an American contact and arrange for the evacuation of the general and his family and members of his staff (this, mind you, several days before South Vietnam officially surrendered, so the officers on the evacuation list were technically deserting their posts). But the young captain is not only a South Vietnamese officer; he is also, as he reveals in the first words of the novel, a spy, a sleeper, a spook, a man of two faces, that is, a Communist agent, secretly working for the side that is just about to sweep into the South Vietnamese capital and end the 30-year war for a unified, Communist Vietnam.

Serving in one army while spying for its enemy is one contradiction in the narrators identity, but not the only one. As the story begins to unfold, we learn that he is racially mixed, the son of a Vietnamese mother and a French father. And six years as a student in California have left him culturally mixed as well, not just speaking unaccented American English but also thoroughly attuned to American attitudes and ways of life. With that variegated background, Nguyens protagonist, whose name we never learn, is at home in the multiple worlds he passes through in the course of the novel South Vietnam and its army, the underground revolutionary movement and the wartime U.S. military establishment in Saigon; then the postwar Vietnamese emigre community in California (where his spymasters sent him to keep informing them on their past and possibly future enemies); and, ultimately, back to the new Vietnam under its Communist rulers. But the captain as he is called in the novel does not fully belong to any of those worlds. He views all of them through both an insiders and an outsiders eyes, which give him a truer and deeper picture than the inhabitants themselves can see.

To be sure, not all fit the hurtful stereotype of the damaged Vietnam veteran. But that does not mean they werent affected by their experience. And it should not be forgotten that Americas past and present wars did not happen just to Americans.

That multi-layered vision is one reason that The Sympathizer is such an extraordinary and illuminating novel. A second reason is that it is stunningly well written, in a voice that rings utterly true from first page to last. And a third is its perfect-pitch authenticity of detail. Viet Thanh Nguyen was only four years old when the war ended and his family (like his fictional narrator) fled to the United States, and was still a small child when the rest of the events described in the novel took place. But his book reads as if it was written from bone-deep, first-hand knowledge of those times and places. Its an astonishing feat of imagining historical truth a truth far more painful and complicated than most Americans on both sides of the Vietnam debate ever realized, and far more morally ambiguous than the mythical narratives both Vietnamese sides have told themselves for the last 40 years.

If The Sympathizer takes American readers onto unknown ground, the landscape of The Price They Paidis a more familiar one. Indeed, the war portrayed in this book evokes the most ubiquitous symbol of all American memories of Vietnam: The helicopter. Michael Putzel, a long-time Associated Press correspondent who covered Vietnam for several years, tells the story of one helicopter unit, C Troop of the 2nd Squadron of the 17th Cavalry Regiment (Airmobile). The pilots and crewmen called themselves the Condors, the units radio call sign.

In early 1971, the Condors flew in the largest helicopter combat operation of the war, supporting nearly 20,000 South Vietnamese troops sent across the border into southern Laos to attack the Communist supply route known as the Ho Chi Minh Trail. Putzels accounts of the Condors missions in that ill-fated campaign are riveting, drawn partly from some astonishing tape recordings that captured radio transmissions to and from helicopter crewmen in the midst of intense combat. The central character in his account is Major James Newman, the commander of C Troop and a genuinely heroic officer. Newman was idolized by his soldiers largely because of the extraordinary measures he took on many occasions (at times against orders) to rescue men who had been shot down or crashed in enemy territory.

But the Jim Newman who was such an admirable soldier and leader in Vietnam was a different man from the Jim Newman who returned from the war, as Putzel discovered years later. Not long after coming home, Newman left his wife and two teenaged sons, whom he never spoke to again. His military career, which had once seemed headed for a generals stars, fell apart too. The rest of his life was a sad tale of erratic behavior and troubled personal relationships a tale that his first family and others who knew him have struggled to explain. The only answer they could come up with, Putzel writes, was that Vietnam changed him.

But Vietnam didnt just change Newman, as Putzel learned when he tracked down more Condor veterans. Not all the changes were destructive, but many were. Some self-destructed as soon as they got home, he writes; others enjoyed successful careers, marriages, children, then crashed many years later. I found only a couple who soldiered on and never looked back.  To be sure, not all fit the hurtful stereotype of the damaged Vietnam veteran. But that does not mean they werent affected by their experience. Summing up his research, Putzel writes: Nearly all the old Condors interviewed for this book were drawing military disability checks for physical or emotional scars and often for both. Cancers linked to the defoliant Agent Orange, a leg amputated due to long-ago war wounds, chronic pain, loss of eyesight, leftover shrapnel, drug and alcohol abuse, PTSD. One way or another, the war touched them all, and it didnt let go.

In a time when hundreds of thousands of American soldiers have come back from a new generations wars, The Price They Paid reminds us that as with Jim Newman and his Condors, the burden of their experience is still on their shoulders, and will be for decades to come. The Sympathizer teaches a more badly needed lesson: That Americas past and present wars did not happen just to Americans. The price paid by our soldiers has not been slight, but it is a small fraction of the price paid by Vietnamese and Iraqis and Afghans. That fact is often missing from American policy debates and from the usual stories we tell ourselves about Vietnam and more recent conflicts. But without it, our understanding of those wars is profoundly flawed.