The Soldier Who Named it Burkina Faso 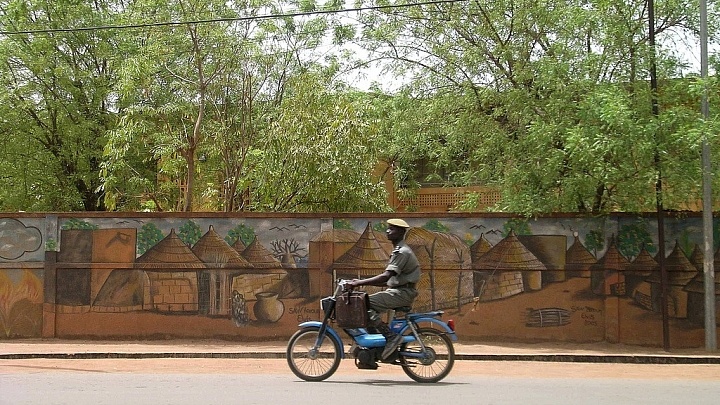 In Thomas Sankara: An African Revolutionary, Ernest Harsch provides a biography of an African leader who must be understood if one is to understand West Africa and radical left-wing politics across the continent. Thomas Sankara, “Africa’s Che Guevara,” ruled Burkina Faso after seizing power in a 1983 coup with the help of Blaise Compaoré and was president until he was killed in 1987 in a coup which was also backed by Compaoré who went on to rule Burkina Faso until overthrown in a 2014 coup. However, the real story of Burkina Faso, as this book points out, is Sankara – a man who quite literally left his mark on the country as it was Sankara who changed the name of this nation from “Upper Volta” to “Burkina Faso.”

The book is short, clear and concise and at just 152 pages it is a quick read. The author’s portrait of Sankara is sympathetic, which the author concedes in the opening of the book –

“I knew Sankara. I spoke with him directly on half a dozen occasions, a couple of times at length. I was also able to observe him giving public addresses and in other interactions while I was covering developments in Burkina Faso as a journalist. This limited familiarity has led me to highlight certain aspects of his personality and style. It may as well introduce some subjective bias.”

This book is useful for scholars as one of the few English language books on Thomas Sankara’s life. Harsch’s sources are his own writings on Sankara and numerous press clippings on Sankara’s rule; there are few critical sources in the book and this also lends itself to a romantic view of Sankara. Indeed, a romantic view of Sankara is de rigeur among those who see him as Africa’s Che Guevara – an image Sankara himself sought to cultivate. Sankara died a year younger than Che Guevara and shared his same panache for wearing berets. Despite his romantic image, we cannot ignore the fact that Sankara was a military dictator who imposed authoritarian one party rule on his country.

Harsch notes that the area was of what was to become Burkina Faso was not considered “pacified” by the French until 1916 and it was only in 1919 that the French formalized the borders of “Upper Volta.” It was a region that was to remain an afterthought of the French Empire and beyond.

A military career for Sankara, according to Harsch’s telling, was probably pre-ordained

Sankara was born in on the 21st December 1949 and his family was part of the minority Mossi Silim ethic group. His father converted to Catholicism from Islam while serving in the French Army during World War II. There is little in Sankara’s early life as presented in Harsch’s book that is worth comparing to other revolutionaries of the 20th century. There is no hint in the book of the father-son clash that we find in the lives of Mao and Castro (both Sankara and his father were soldiers), nor was there a revolutionary older sibling as in the lives of Lenin and Trotsky. If anything, Sankara played this role in the lives of his younger siblings who remain active in Bukinabe politics to this day. There is one odd parallel in his biography with that of Josef Stalin. As with Stalin, he explored becoming a priest and almost joined the seminary. When Sankara passed an interest exam for the 6th grade, his father told the Catholic priests he would not be joining the seminary after all. They responded that the elder Sankara had not prayed hard enough for his son. As such, a military career for Sankara, according to Harsch’s telling, was probably pre-ordained.

Soon after finishing school, Sankara enlisted in the military and took part in a military exchange program that allowed him to spend time in Madagascar (where he briefly met the “Red Admiral” Ratsiraka) before returning to Upper Volta at the age of 24. In 1974, he made a name for himself, according to Harsch, by leading a successful small-unit action during a brief border war with Mali. As a result, Sankara was able to appeal directly to Upper Volta’s President Sangoulé Lamizana (himself an upstart Lieutenant Colonel) to improve the conditions faced by soldiers under his command in the years immediately following the war. Sankara spent much of this period in command of various military academies. In this respect, his career overlaps with Spain’s Franco who also used his role as commander of a training academy to further his political aspirations.

Upper Volta was no stranger to coups, with the country’s first coup having occurred in 1966. Sankara was involved in coups that swept the country in 1980, 1981 and again in 1983. However, once in power in 1983, Sankara sought a clean break with the past. The 1983 coup marked one of the last Marxist-inspired revolutions anywhere in the world prior to the end of Cold War. Harsch tells us that Sankara took inspiration from numerous sources and was enamoured with revolutionary leaders including Mozambique’s Samora Machel, Grenada’s Maurice Bishop and, above all, Fidel Castro. He writes –

“Sankara readily acknowledged his appreciation of the Russian, Chinese, and Cuban revolutions. During visits to his office it was easy to spot volumes by Marx and Engels on his bookshelves and a bust of Lenin on his desk. Sankara read widely, including the Bible and Koran and writings by many non-Marxist revolutionaries and other progressive thinkers.”

In other regimes, an ambitious officer like Blaise Compaoré would have been made ambassador in some distant locale. For strongman regimes, every idol soldier is a potential threat

Harsch notes that after seeing Madagascar’s Green Berets in action (a military organization involved in public works projects), Sankara sought to emulate this model in Burkina Faso, with the military as an instrument of social revolution. “Military bases around the country started farms to grow food and raise livestock, engaged in tree planting to combat deforestation, cleaned up trash from towns and villages, dug wells, and built schools, health clinics, roads, and other facilities.” He abruptly ended the U.S. Peace Corps program in the country as their work conflicted with his new vision for the military and partly in a beau geste toward Cold War politics. This move probably hurt the people of his country more than it helped, but, as noted, Harsch has a tendency to downplay the negative aspects of Sankara’s rule.

Reading between the lines, it is clear Sankara did not handle his military responsibly. In other regimes, an ambitious officer like Blaise Compaoré would have been made ambassador in some distant locale. For strongman regimes, every idol soldier is a potential threat. In Rajapaksa’s Sri Lanka, the military was everywhere even years after LTTE Tiger threat had been eliminated. Not far from the memorably named town of Panama, I encountered a soldier guarding a lonely beach, not in any guide book. The beaches only feature was a long abandoned Norwegian fish-farm which was sinking into the sand. The soldier had no radio, but was well armed.

Conversely, Sankara, according to Harsch, thought it was “criminal to spend money on arms” and the results showed in the next war with Mali. Since the 1974 war, the Burkinabe press had kept an anti-Malian line and Sankara exacerbated the crisis by expelling a Malian diplomat. In response to this and other tensions, the Malians launched an attack on Christmas Day 1985. Multiple border posts and guard stations in the disputed Agacher Strip were attacked. The 9,000 strong Burkinabe military were completely off guard at the start of the “Christmas War.” A few days later, an unopposed Malian air-strike on Ouahigouya exposed just how defenseless Burkina Faso was. Over a hundred Burkinabe people were killed when the guns fell silent on the 30th December.  Sovereignty over Agacher Strip issue was subsequently resolved by the International Court of Justice which divided the land between the two claimants equally.

Harsch does not discuss the long-term impact of the war, but perhaps discontent over the mistreatment of the army and their embarrassment in the war with Mali contributed to the anti-Sankara coup less than two years later. Soldiers on the orders of Compaoré attacked a building where Sankara was holding court with other revolutionaries and Sankara was shot and killed.

Harsch points out that Sankara’s death was felt across Africa, yet he does not sufficiently note the continued impact of Sankara’s legacy elsewhere in Africa. Rarely has a radical figure from Francophone Africa had such an impact on Anglophone Africa. The Economic Freedom Fighters, a populist left-wing opposition political party in South Africa, claim to be Sankarist. Didier Awadi, a Senegalese hip hop artist, also claims to be Sankarist. In 2013, I visited M23-controlled areas of the Eastern Congo. Many of the armed cadres I met with were from a cadre class named after Sankara. M23, like Paul Kagame’s Rwandan Patriotic Front, are noteworthy for encouraging soldiers, civilians and public servants to spend a day doing small projects around the community. I observed M23 cadres repairing roads and clearing rubbish – activities that Sankara would have approved of.

Sankara has had a mixed legacy elsewhere. Harsch notes that “Sankara became the first head of state to visit areas of Western Sahara under the control of the Polisario Front.” This move to internationalize the issue of the Western Sahara succeeded in having Morocco ejected from the African Union. It is arguable if having Morocco, one Africa’s most dynamic economies, outside the African Union has helped or hindered peace efforts. Perhaps if he had lived longer, Sankara would have renounced Marxism like Ahmed Sekou Toure and Jerry Rawlings in neighbouring countries. Or Perhaps not. One detail that Harsch left out is that, like Che Guevara, Sankara enjoyed riding motorcycles.