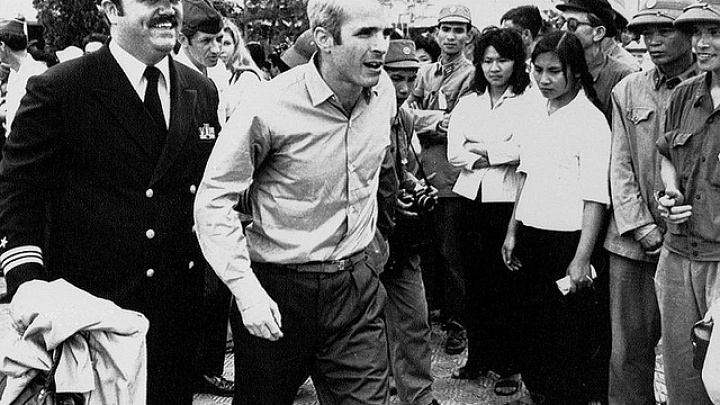 What do American service members look like today? Do they resemble those that served in other wars? How has history changed those that decide to serve? Our history lessons taught us how the brave volunteers and conscripts fought the British in the American Revolution and the wars that followed. Senator John McCain and Mark Salter—former Sen. McCain staffer and collaborator of many of Sen. McCain’s previous books — tell the story of 13 soldiers, sailors, airmen, and Marines that fought in each of the major conflicts, showing how they were different and yet they fought for many of the same reasons and values. America began as a melting pot of individuals wanting a new life, but often the service members endured the sting of prejudices against their race or ethnicity by a nation that they were protecting.

Sen. McCain’s service and support for the defense of America are well established. But the question that I asked as I read this book and listened to his speeches on the current conflict in Syria and Iraq was: Will intervening in war be just one more chapter in 14 Soldiers?

Sen McCain retired from the Navy and comes from a long tradition of service to the United States, Admiral John S. McCain Jr, his father commanded U.S. Pacific Command while Sen. McCain was a Prisoner of War in Hanoi and Admiral John S. McCain, his grandfather was a hero of World War II. Sen. McCain dedicated the book to four of his fellow POWs remarking, “It was a privilege, Gentlemen.”

“War might be a great leveler while its being experience, but the millions upon millions      of Americans who have gone to war are the most diverse population the country would produce.”         Captain (Senator) John S. McCain III, U.S. Navy (Ret)

From the very beginning of our country, patriotism is often thought of as being synonymous with serving in the military. However, Joseph Plumb Martin, a young teen when he entered the militia, wrote in his memoirs from the Revolution, “…Patriotic sentiment was scarce…I thought I was as warm a patriot as the best of them.” After finding the term of his enlistment differed from his expectations, and he was to remain on duty longer, he wrote, “I wished only to take priming, before I took upon the whole coat of paint for a soldier.” Martin served during winter with General Washington’s army at Valley Forge; he and his fellow soldiers often went without food or clothing, walking barefoot or with rags for shoes. Martin, like most veterans of the Revolution, veterans never received any of the “acclaim or compensation they deserved.” Even though Congress awarded small pensions, only about 3,000 veterans ever collected anything for their service. He closed his memoirs talking about those that resented veterans for receiving a pension saying they were “hardhearted wretches.”

From the first day of service, a military member begins to see the world through a different lens. Oliver Wendell Holmes was the son of a prominent physician and young officer in the 20th Massachusetts Volunteers, or as it was known the Harvard Regiment, at the beginning of the Civil War. He saw extensive combat in Virginia and Maryland, including the Battle of Balls Bluff just a few miles from me in Leesburg, Virginia. One lieutenant wrote of the battles, “No description I ever read begins to describe the slaughter …” Holmes later told a friend the lessons of war, “To know however fine a fellow I thought myself…there were situations… in which I was inferior to men I might have looked down upon had not experience taught me to look up.” The Civil War affected the country more than any other conflict, fought in the towns and countryside of the two nations that had once been one, brothers against brothers. Holmes would later serve on the Supreme Court but he carried his lunch in an ammunition tin from the war and would forever prefer the title of “Captain rather than Judge.”

“War when you are at it is horrible and dull. It is only when time has passed that you see its message was divine …that man was capable of miracle, able to lift himself by the might of his own soul.” Captain Oliver Wendell Holmes 20th Massachusetts Volunteers

Two veterans of the wars in Iraq and Afghanistan, Americas newest “greatest generation,” show the diversity of those that have fought in these two conflicts. Specialist Monica Lin Brown became the medic everyone wanted on patrol in Afghanistan because of her skill as a combat medic even though it was not within her job description. Caught in the cross fire, she treated the wounded soldiers and “shielded them with her body” as rounds and shrapnel flew within inches of her position. One soldier described her, “Of all the medics we’ve had with us throughout the year, she was the one I trusted most.” This statement marked her as an elite medic that earned the treasured title of “Doc” from the soldiers she treated on the battlefield.

“You go out there and you do your job. And you don’t know what’s gonna happen. Anything could happen.” Specialist Monica Lin Brown

Navy SEAL Master at Arms Second Class Michael Monsoor joined the Navy with one goal becoming a SEAL. Nevertheless, he dropped from his first BUD/S class due to injuries and served in the fleet until he could reapply. He earned his Trident in 2005. He deployed to Western Iraq during some of the worst fighting in the war. His team often provided sniper over watch to Army units as they applied the new counter-insurgency tactics to the area that was the home of Al Qaida in Iraq and other insurgent groups. During his final firefight, a short fused grenade landed on the roof where he and a small team of SEALs provided sniper fire for the soldiers on the ground. Seeing the grenade, he warned his teammates and threw his body to take the blast saving the lives of SEALs on the roof.

“He had the best chance of avoiding harm altogether, but he never took his eye off the        grenade. His only movement was toward it.” SEAL Lieutenant Survivor of the attack

Many of the veterans in the book received medals for their heroism although some felt slighted they did not receive the honor they thought they deserved. Regardless of in which war they served, all of the men in women whose stories are in the book were dramatically changed by their service and as Captain Holmes said, “Wars don’t change us once: they go on changing us, as we keep looking for meaning in the things that happened to us and the things we did.” A constant theme in the book is how Americans, whose rights and liberty were protected by these courageous men and women, do not appreciate the sacrifices, the hunger, and the effects of combat that would last the remainder of the veterans’ lives. Some of the veterans lived long and full lives and contributed to their communities while others gave the ultimate sacrifice, often way too young with so much more to give the world.

“They should not be forgotten. But they should be remembered for who they really were: ordinary people…who did something exceptional.” Senator Johns S. McCain III

McCain and Salter tell the historical story of the ordinary Americans that went to war, told in a way that may help the average reader understand the sacrifice, the lost blood and treasure of sending our sons and daughters to war. The book left me with an eternal question that needs to be answered before engaging in a conflict: Is this conflict worth one American life?

Thirteen Soldiers: A Personal History of Americans at War
by John McCain and Mark Salter