The Lows and Highs of Life Aboard an Aircraft Carrier 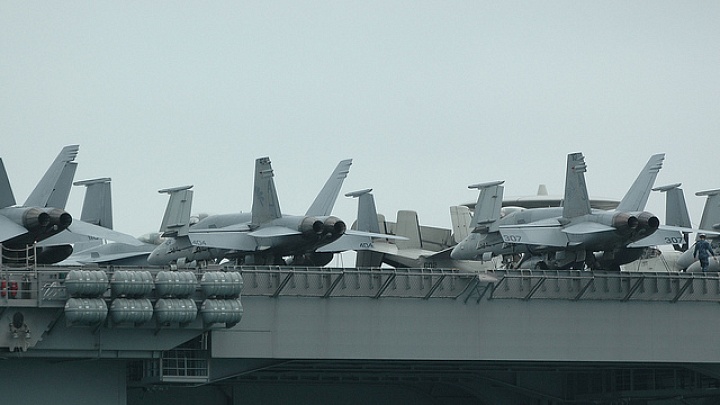 Reading Geoff Dyer’s Another Great Day At Sea felt at times like being regaled with tales from places afar by a slightly annoying guy at a cocktail party where you can’t tell if he is treating you and the subject matter with genuine interest, or a snarky sense of humor masquerading as wit.

Dyer introduces us to a world aboard a U.S. Navy Aircraft carrier but through the eyes of a middle-aged British journalist. Not just any journalist, but one whose childhood fascination with model aircrafts planted the seeds of a fascination with military aviation. Fast-forward several decades: Dyer receives the opportunity to spend two weeks aboard the USS George H.W. Bush (CVN-77), a Nimitz-class super carrier perched in the Persian Gulf, living among nearly 6,000 servicemen and women as well as several dozen planes. Dyer arrives via COD (Carrier Onboard Delivery), which serves as a rapid introduction to the Navy at sea and the uniqueness of carrier life. But the most fascinating element of his voyage was not the austere interior of the C-2A Greyhound, the fact that he would be experiencing his first carrier “trap,” or the peculiarity of having to wear safety gear for the trip. It was a female airman who was part of the flight crew, and her long hair pinned back into a bun. “The Navy allowed women to keep their hair long,” he notes. “I wasn’t surprised, exactly. Just pleased that’s how things were.” I shudder to think how Dyer would have felt had she worn her hair in a smart-looking bob or pixie cut.

Then there are the “inconveniences” of living aboard an aircraft carrier like sharing a stateroom with strangers. So he’s pleased that his email campaign was successful at snagging him a private stateroom. But the delight over his comfortable digs wears off when he first experiences the cacophony of aircraft operations on the flight deck. “[I]nconceivably noisy,” he complains, “but the noise of jets taking off was nothing compared with the noise of jets landing. I thought the ceiling was going to come in.” You get used to the noise, his guide reassures him.

Dyer finds it all too easy to lapse into painting familiar stereotypes familiar to me, as a veteran with years spent at sea.

The author is then introduced to the flight deck – what is maybe the most dangerous place in the Navy. He notes the multicolored float coats of the flight deck personnel, each hue representing a specific job on the flight deck. He marvels at how they remain in constant visual communication to effectively convey what activity is taking place or what needs to be done. His guide advises Dyer to be mindful of the various “hoses, pipes, hooks, chains and other small things that could be tripped over.” The author sees firsthand how the tiny “plane-shaped specks” land on the carrier, in an environment where the “dangers…are numerous and evident.”  This is where I get a sense that Dyer begins to recognize that a Navy aircraft carrier is an intricate, impressive, and perilous environment where at any moment, the routine can turn into an emergency if not for the vigilance and competence of the entire flight deck organization.

And then, there’s the food.

Starting with his first meal and throughout the course of the book, the ship’s food is a constant source of angst and despair for Dyer.  Referring to it as “slop”, “gag-inducing,” and a “fried reek of congealed eggs and bacon and other horrors avoided,” Dyer chokes down meal after meal in wonderment – sometimes silent, sometimes not – over how the ship’s company can survive an entire deployment on what is being served in the wardroom.

As Dyer begins to acclimate to his environs, we finally get to meet the servicemen and women who call the carrier home. We meet enlisted technicians who tirelessly maintain the catapults and arresting gear, the warrant officer who feeds almost 6,000 people daily. We get a sense of the orders of magnitude required to serve the crew, the medical officer who looks after the team that keeps the ship’s crew healthy, and the chaplain and psychiatrist who look after the crew’s spiritual and mental wellbeing. Dyer finds it all too easy to lapse into painting familiar stereotypes familiar to me, as a veteran with years spent at sea. But it also feels familiar in the sense that it risks presenting these individuals as caricatures of the very real men and women who breathe life into the USS George H. W. Bush, rather than allowing the reader the opportunity to get to know the individual behind the uniform.  His attendance of a Sunday church service turns into a criticism of Bible study – he laments that the singing had descended into “low level lit crit of a text that didn’t merit any kind of serious scrutiny.”

Dyer is at his best when he lets the crew speak in their own words – though the attractiveness of his female subjects seems to be a recurring surprise to him. We are introduced to Jax, a FA-18 pilot who shares her life as one of the few females in the fixed-wing aviation community. We learn about the commanding officer, Captain Brian “Lex” Luther, who fell in love with the “ballet of carrier aviation.”  We root for the career of the culinary specialist, whom Dyer refers to as the “culinary equivalent of a Rocky film, a chef’s version of Barack Obama’s journey to the White House.”

By the end, Dyer seems to apply less cynicism to the treatment of his subjects. But this is not a book that would ever be placed on the same shelf as, say, George C. Wilson’s Supercarrier, which described life aboard the USS John F Kennedy, or considered in the same vein as the PBS series, “Carrier,” chronicling the reality of life aboard the USS Nimitz. It is difficult to disconnect my own shipboard experiences from how Dyer observes Navy life, but at times it is difficult to determine if Dyer’s brand of humor is actually making fun of those whose stories he is sharing. Though not the most faithful depiction of carrier life, Dyer’s coherent account provides a glimpse – at times humorous, at times irreverent – into the lives of servicemen and women whose careers are spent supporting the “ballet of carrier aviation.” And, true to the book’s title, they strive to make every day “another great day at sea.”

Koma Gandy is a senior manager in the Advisory Services practice of Ernst & Young LLP and past fellow at the Truman National Security Project. She served in the U.S. Navy active and reserve components, and made several deployments to the Western Pacific and Arabian Gulf, and is a veteran of Operation Iraqi Freedom, attaining the rank of Lieutenant Commander.