State-Building and the Wests Empire in Denial 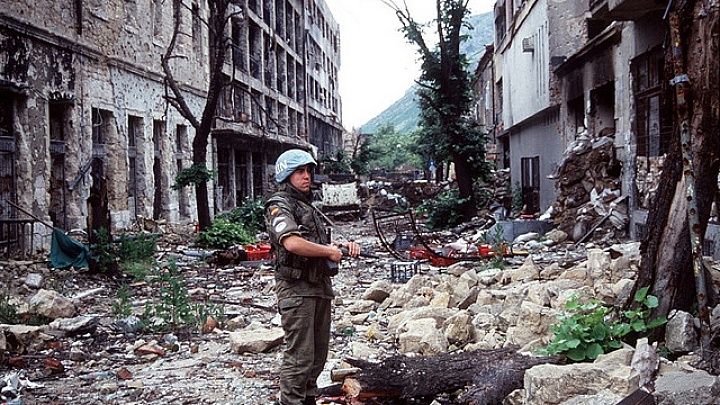 The politics of state-building is one of the most significant and controversial issues in policy-making in the 21st century. The tensions within this complex, multilevel process are deeply rooted in the changing nature of politics and power.

On the one hand, in the post-Cold War era the liberal internationalist discourse (buttressed by the theory of liberal peace) has come to recognize that at times the actions of the state (whose purpose is to protect its constituency and evenly distribute economic opportunities) often pose a threat to the security and a structural constraint to the well-being of that same constituency.

On the other hand, humanitarian intervention can be said to weaken the sovereignty of others states upon which the Westphalian system was structured and to represent a practice of colonial mimicry, actually hindering the development of “developing” countries and normalizing a relationship of domination between the West and the “Rest”.

Due to its contested nature and intrinsic connection to broader power relations, this issue has also become a privileged locus of academic critique. The need to understand the imbrication of power with the practices of state-building has been one of the guiding lines for David Chandler’s work. In his book Empire in Denial: The Politics of State-Building, Chandler sets out to unearth how the changing discourse of state-building typifies a distinctive framework of imperial domination that, while reinforcing the principles of the neo-liberal project, also reflects the Western desire (and need) to evade its responsibility in the process. In his words, “state-building is the practice of denying empire.”

The puzzle underpinning this book is the ethics of power and domination. However, Chandler does not question whether domination and unequal power relations exist, but rather how these relations are being reconstituted in ways that “reflect the institutionalization of new hierarchies of power” and enable the West to “exercise influence without assuming direct formal responsibilities.” Specifically, Chandler focuses on how democracy promotion and state-building are in fact extending Western power through a post-modern practice of empire: The language of empowerment and capacity-building.

Organized into nine chapters, the book starts by drawing a theoretical framework of an “empire in denial” and proceeds through exploring the changing focus of the interventionist discourse from a rights-based to a capacity-based sovereignty, from government to governance, and from a self-interested ethics to a postmodern ethics. In chapters 5 and 6, Chandler applies these arguments to the denial of empire in the context of EU enlargement. Accordingly, he carries out a survey of the EU’s expanding influence in the Bosnian context and the Balkans at large while stressing how the EU denies responsibility for the outcomes of its own power. The author saves the final chapters for the uncovering of pragmatic effects of state-building practices at the level of state/society relations in recipient countries.

By exploring the examples of Bosnia and Iraq and the specific state-building mechanisms of anti-corruption and the rule of law, Chandler concludes that these governance techniques are complicit in producing “phantom states” which are not “recognized or legitimized as embodying a collective expression of their societies,” while at the same time allowing Western countries and international institutions to evade accountability for their own governance impact.

These techniques are complicit in producing “phantom states” while at the same time allowing Western countries and international institutions to evade accountability for their own impact.

At the methodological level, in order to uncover the distinctive patterns of post-modern domination embodied in the politics of state-building, the author draws on an analysis that combines both theoretical insights and empirical lessons. This framework enables Chandler to remark how contemporary state-building practice represents a shift in the typologies of power employed in West/non-West relationships. Accordingly, the author argues that power mobilized by the West in those practices is assuming increasingly an indirect and diffuse character, and can be located both in its institutional (law-enforcement, anti-corruption) and productive forms (through capacity-building and empowerment). This indirect and diffuse character of power is certainly one of the features enabling Western governments and institutions to evade political accountability for their own acts. Therefore, the framework of “empire in denial” not only emphasizes the central role that power plays in the practices of state-building, it also enables us to achieve a more comprehensive understanding of how it works.

Chandler comes to a series of conclusions that shed some light on the dilemmas of state-building. First, regarding the idea of “the empire’s denial”, the author claims that the “new practices and forms of international regulation” are neither “a continuation of past forms of empire [nor] new forms of Foucauldian governmentality.” Alongside the therapeutic language of empowerment and capacity-building imposed in foreign policy, these practices stem from “the desire to deny the power of empire” and reflect “political changes at the level of the Western Self’s capacity for projecting power.”

Secondly, regarding “phantom states”, Chandler argues that these are a product of the above regulative practices, in which “sovereignty no longer operates to demarcate the distinction between the inside and the outside of distinct political communities” and which are reflected in the growing incapacity of the quasi-sovereign “to formulate public policy independently of the requirements of international institutions.” Furthermore, the remaining authority within the polity is recurrently undermined through the logics of Empire.

Arguably, what is groundbreaking in this work, and at the same time opens up new theoretical possibilities, is how the author uncovers the intrinsic relationship of mutual constitution between the evolution of such international practices and the changing political environment of Western democracies. However, by privileging Western states’ domestic variable over other factors, there is always the danger of reducing the outcomes of the politics of state-building to a product of Western domestic preferences, rather than seeing them as the result of broader and more complex interactions.

Two critical comments on this book should be noted. First, while considering that at a theoretical level Empire in Denial provides an insightful and astute critique of Western domination and a framework worth further exploration, the fact that it is a compilation of scattered articles has a negative impact upon the cohesion of the work as a whole. Despite the clear rationale underpinning the book, the author does not achieve a coherent articulation between chapters and resorts often to an extensive repetition of ideas in order to guarantee a recognizable direction to his work. The major problem posed by the lack of articulation is that it gives the reader the sense that what is guiding the work as a whole is a statement rather than a research question; that the changing language of state-building and the regulative framework it imposes on non-Western countries under assistance stems solely from the need of Western governments and institutions to elude the responsibility they owe their constituencies for their practices, due to the fact that they lack a progressive social project.

Secondly, at the methodological level, Empire in Denial could benefit from a comparative approach using distinctive case studies of state-building. Although the Iraqi case is introduced in one of the final chapters, the scope of the book is too narrow and limited to the Bosnian experience and to the EU practices of denying empire. Arguably, the Bosnian case is more an exception than a general rule in state-building, since ”state fragility” is a condition more undoubtedly found in geographical areas beyond the EU. Therefore, the book would give a stronger contribution to the literature on state-building if it opened up the scope of the study to cases outside the EU. In fact, there are a number of cases where the rationale underpinning state-building is constrained by the fact that the agent receiving assistance aspires to join the European Union. Hence, including a case in which the interaction among actors is not structured around the logic of EU accession would provide a better understanding of the different practices involved in denying empire and how they adjust to specific political contexts.

Empire in Denial is certainly an insightful book that displays an original argument able to shed a new light into the dilemmas of state-building. This work is a must-read for those who are keen to understand how state-building works at the discursive level and especially for those with a particular interest in the Bosnian “experiment.” It deploys a language accessible to informed readers while at the same time dealing with more profound philosophical and theoretical questions underpinning current practices of state-building. The book has room for improvement, which could easily be achieved through a more comprehensive comparative analysis.

Nonetheless, the framework of Empire in Denial opens up a whole new and distinctive understanding of the logics guiding state-building and external-led intervention. David Chandler successfully demonstrates how the discourses of building peace through liberal institutions is altering the power relations among donor and recipient states, while at the same time reflecting the ongoing challenges found within Western democracies’ domestic sphere.

Empire in Denial: The Politics of State-Building
by David Chandler
Pluto Press, 240 pages, $18

Why Chlorine Gas has Returned in Syria ...