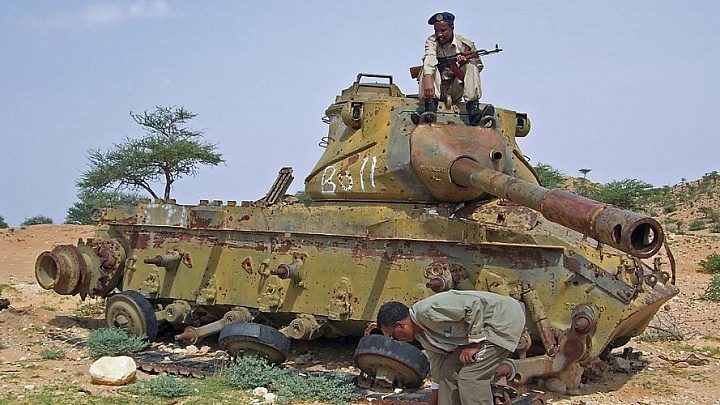 Since the rise of al-Shabaab (The Youths) terrorist group, Somalia has never been far from headlines across the globe. It is this troubled and tragic country that journalist James Fergusson profiles in his most recent book, The World’s Most Dangerous Place. Fergusson has had a diverse career, including being a press spokesman for the Office of the High Representative in Sarajevo after the Daytona Peace Accords and he has extensive work as a journalist.

Fergusson’s work on Afghanistan is highly regarded, even if some of his conclusions (such as the suggestion that ISAF should negotiate with the Taliban) might be controversial. Fergusson applies a similar on the ground approach to his latest book, but the subject this time is the Horn of Africa and not Central Asia. In compiling the book Fergusson travelled across “Greater Somalia” from Hargeisa in the north to the Somali majority areas of Kenya in the south.

When Somalia first made global headlines after the end of the Cold War, most of al-Shabaab were still in theirs diapers. Between 1992 and 1995, Somalia was home to the United Nation’s largest international mission, UNOSOM. UNOSOM’s staff of 30,000 consumed an annual budget of $1.5 billion. The international community seemed committed to stabilising Somalia in the spirit of pan-humanism that briefly characterized the Post-Cold War period. Then the fateful 1993 Battle of Mogadishu occurred, best chronicled in Mark Bowden’s 1999 book Black Hawk Down, and in its aftermath the international community decided that stabilizing Somalia wasn’t worth the price. It wasn’t until the rise of the Islamic Courts Union in 2007 that Somalia again captured headlines across the world. The country’s status on the fringe of global news is superficially similar to Afghanistan, which is perhaps why Fergusson decided to make Somalia his next project after extensive reporting in Afghanistan.

Fergusson is a good friend of British Prime Minister David Cameron and since it was published, The World’s Most Dangerous Country has certainly been read in policy circles. The title is a bit of a stretch no matter how we interpret “dangerous.” Fergusson provides much insight into Somalia’s woes in the book, but the argument that this is the most perilous spot on the map deserves some doubt. Having travelled in the Horn of Africa, I would argue that political violence aside, the incidence of violent crime is much higher in, say, Latin America. Secondly, from a geopolitical perspective Pakistan is probably the world’s most dangerous state. Nor is it the terrorist hotspot it once was. In 2014, according to the Institute for Economics and Peace, 32,658 people were killed by terrorism, (compared to 18,111 in 2013) with the top five countries being Afghanistan, Iraq, Nigeria, Pakistan, and Syria. This issue aside, the strength of this book lies in the author’s readiness to examine all of Somalia’s problems and those of its diaspora.

The “dangerous” referred to in the title might be the result of the fact that this region has been awash in small arms for decades. Modern rifles were first introduced to the area by the French in large numbers during the building of the Addis-Abba-Djibouti railway, allowing homicidal inter-tribal warfare to become genocidal (page 55). During World War I, the Ottomans provided guns to Somalis willing to fight the British. Following World War II, with Ethiopia in ruins and British or Allied control of what is today Kenya, Somalia, and Djibouti, there was for a brief moment an opportunity to create a true nation state. Yet the vision of a Greater Somali alluded to by the five-pointed star on Somalia’s national flag was not realized.

World War II and the Cold War brought even more Western arms to the region. This point is persuasive because few regions in Africa were as much of a geopolitical playground in the 20th century as the Greater Somali region was and the primary beneficiary of this since the end of the Cold War has been Ethiopia. Indeed, the destruction of Somalia was achieved for similar geopolitical reasons as that of Ethiopia, as Somalia once fielded Africa’s most capable army (page 113).

This is one of the more readable journalistic books on an African security problem in part because of Fergusson’s dedication to understanding Somali culture (he clearly studied Somali music and poetry in writing the book). There is also plenty of British imperial history, with references to the Mad Mullah, Sir Francis Burton, and Gerald Hanley. Fergusson talks to religious leaders, the unemployed, those press-ganged into al-Shabaab and those just trying to make ends meet. The author also travels outside of Somalia for his research, including Somali-majority areas in Kenya and Ethiopia and the wider diaspora in the UK and US.

Probably the most intriguing part of the book is the time Fergusson spends in Mogadishu where he meets former al-Shabaab fighters and by chance spends some time with Jerry Rawlings, the half-Scottish former leader of Ghana. He also spends time with frontline Ugandan units battling al-Shabaab in Mogadishu. The discussions with Ugandan military commanders deployed to Somalia are enlightening, though the author seems to feel that Ugandan President Museveni was primarily concerned with regional security when he sent Ugandan troops to Mogadishu.  Yet the inverse was true in 2006 when the decision was made for African Union troops to intervene in Somalia and today the Ugandan military believe al-Shabaab is supporting anti-Museveni groups like the ADF.  In the Horn of Africa, as in Afghanistan, all is often not as it first appears.

The Worlds Most Dangerous Place: Inside the Outlaw State of Somalia

ISIS Is an Existential Threat, but Not ...