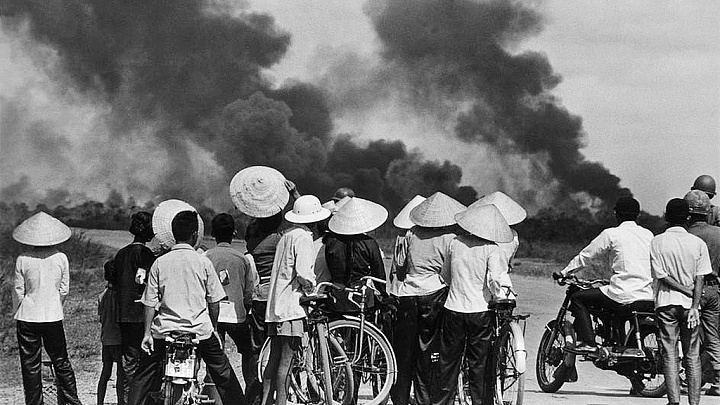 A year ago, the Vietnamese-American author Viet Thanh Nguyen published The Sympathizer, a novel set in the Vietnam War and its aftermath. It is a brilliant piece of fiction, one of the very best to come out of that conflict. (As this review was being written, it was announced as the winner of the 2016 Pulitzer Prize for fiction.)

Nguyens new book is harder to characterize. Nothing Ever Dies is an extended essay about war and memory, focusing primarily on Vietnams war but detouring occasionally into other conflicts. It ponders how people remember wars, how those memories are shaped by personal history and human nature and by national history and culture, and how they are transmitted in literary and visual art. It also explores how memories are weaponized, as Nguyen calls it, by a “memory industry” he views as part of a larger “war machine” that promotes war, violence, and oppression and undermines the quest for a more peaceful world.

Nguyen did not just pursue those ideas in the United States and Vietnam. He also journeyed to Cambodia and Laos, whose wars were and remain overshadowed in the rest of the world by the larger conflict in Vietnam but brought terrible devastation to both countries. And he looked for memories of the war in South Korea, which (although very few Americans remember it) had significant forces in Vietnam during much of the U.S. war there.

Americans on the other side of the argument have striven to create a more conventionally patriotic narrative of the U.S. war in Vietnam, largely through focusing on the sympathetic figure of the American soldier

This is a book with significant strengths and significant weaknesses. A particularly notable plus is its ruthlessly clear-eyed vision that sees through all sides mythologies of the war Nguyen was born into.

In communist-ruled Vietnam, he writes, the victors and their descendants endlessly repeat their heroic legend of defeating U.S. imperialism but remain “conveniently stricken with amnesia” about what they did to their countrymen on the losing side (or to the people of Laos and Cambodia). The Vietnamese-American community in which Nguyen grew up remembers the suffering that came with South Vietnams defeat and the flight to America, but not “the venality of the southern Vietnamese regime” that was a critical weakness in the war against the communists. And in America, myths descending from the opposing sides in the national Vietnam debate both falsify the past.

Nostalgic American memories of the anti-war protests, Nguyen reminds us, forget that the movement “elevated Ho Chi Minh to iconic status, waved the flag of the National Liberation Front, praised the communist Vietnamese as heroic revolutionaries defying American imperialism, accepted communist propaganda that the South Vietnamese were traitors or puppets, and was mostly blind to the Stalinist direction of the Vietnamese Communist Party.” Meanwhile, Americans on the other side of the argument have striven to create a more conventionally patriotic narrative of the U.S. war in Vietnam, largely through focusing on the sympathetic figure of the American soldier. Their myth detaches the soldiers and the veterans experience from every other piece of the story, the better to forget all the things that were wrong and painful to remember.

In writing about that phenomenon, one could wish Nguyen had expressed a bit more empathy for the soldiers. Its human, after all, to try to find some good reason for bad experiences and some positive outcome in less-than-successful efforts. But even if Nguyens commentary is somewhat lacking in compassion, his conclusion on the “support the troops” cult and its effect in recent American history is hard to argue with:

“What lies behind the slogan is not only support for the troops but the absolution of the same civilians who utter the slogan. If the hands of the troops are clean, so are the hands of these civilians. As for the American dead, they have not died for nothing after all. This slogan has arisen in their memory, proving once again that the memories the living create of the dead – and the dead themselves – are strategic resources in the campaigns of future wars. Once the dead seemed to cry out against war, but now, just as plausibly, the dead seem to cry out in support of our troops who wage new wars. At least that is what the living say.”

Its a worthwhile trip, in the end, but I am probably not the only reader to find it a test of patience as well

There are plenty of other sharp-edged passages like this one in this book. But it also has long stretches that are a challenge to get through. There are several reasons for this. One is a curious lack of the human voice. Nguyen cites literally hundreds of films, stories and scholarly studies, but typically he gives only a brief snippet of a thought or a quote, illustrating a point he seeks to make but not giving any real flavor of the experience or emotion a work expresses. Similarly, in writing about his travels in Vietnam and Cambodia and elsewhere, he tells a good deal about museums and monuments and literary works, but almost nothing about people he met or conversations he may have had or heard – so Nguyen’s narrative presents the symbols of peoples memories, but not the ones in their minds or hearts. As a result, his writing tends to have a somewhat lifeless feel. (He is oddly reticent about his personal history, too. We learn only a few sparse, fragmentary details about his familys past in Vietnam or their escape to America at the end of the war in 1975, when Nguyen was four years old, or about Nguyens own experience growing up in the Vietnamese-American community in California.)

A second drawback in the book is that it makes many of its points far too often, repeating essentially the same thought again and again, often in almost the same words. And a third issue is Nguyens literary style, which regularly hovers on the line between eloquence and overwriting. Readers with different tastes will define that line differently, but I felt Nguyens prose fairly frequently crossed into the wrong side. Possibly under the influence of his style, an elaborate image took shape in my mind as I got farther into his pages: it felt a bit like walking through an archaeological site that has not been reclaimed from the jungle. There are fascinating and sometimes surprising temples and carvings but you have to clamber through overgrown paths and pretty dense underbrush to see them. Its a worthwhile trip, in the end, but I am probably not the only reader to find it a test of patience as well.

Nothing Ever Dies: Vietnam and the Memory of War

A Double Dose of Reality on Homegrown ...