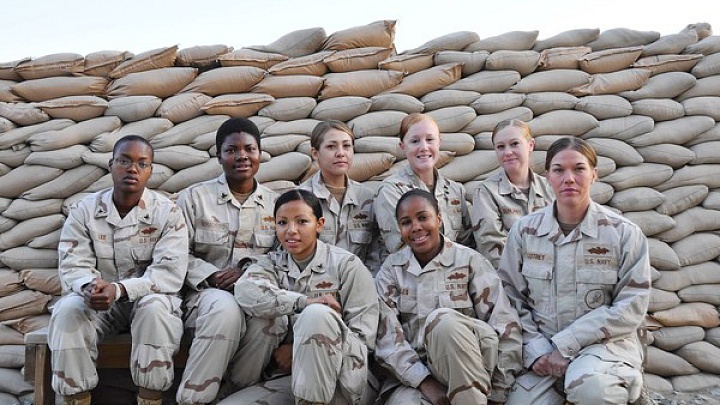 Such a fierce debate, so emotional, and so many points to think about. For those of us out in the Hinterlandthe general publicall this fuss over women in ground combat makes you wonder, who should we listen to?

Should it be people like Loretta Sanchez and Martha McSally, or even Tammy Duckworth? I mean, for God’s sake, she lost two legs in combat. Or should we listen to the Pat Buchanans and the Robert Maginnises of the world? Or perhaps someone like Kathleen Parker. She’s nationally recognized, certainly quite intelligent, has a long list of points, and she’s not alone.

Here is a look at things in plain English, without the intellectual buzz words or the politics or the emotional posturing and unspoken stereotypes. Remember, we’re talking about combat here: Fighting hand-to-hand with bullets flying. There are a lot of arguments out there, but most of them come down to two words: Can and Should.

This, it happens, is a foolish question. Women have been fighting successfully since at least 480BC (see Artemsia of Halicarnassus). In a lot of cases they had to pretend to be men to get the chance, but the record of combat effectiveness and bravery (included being wounded and dying) are unequivocal. That includes fighting in organized units. In fact, detailing all the examples would fill a book.

Here are some relevant examples:

In the Dahomey Empire, female shock troops numbered up to a third of the army, and were feared. They were also noted to be exceptionally cruel torturers.

In Russia during World War II, in addition to front-line women snipers, women flew squadrons of highly-flammable, flimsy bi-planes to bomb German trenches all night long, at low altitude, into spotlights, while living themselves in trenches and bunkers during the Russian winter. And, yes, the mechanics were women too, lived out in the same freezing temperatures. World War I, Maria Bochkareva, and the Battalion of Death are still another story.

During Eritrea’s war of independence with Ethiopia, up to a quarter of frontline infantry were women. Supplies for dealing with their menstrual periods were part of the logistics supply chain.

And, of course, American women have been winning the Silver Star since World War I, when it was called the Citation Star, with the most recent awarded in Iraq and Afghanistan. Sergeant Leigh Ann Hester was awarded hers for leading an assault into direct enemy fire, at close quarters, after being ambushed.

No matter what you believe, women are on the verge of gaining real equality of opportunity in the military. It is inevitable. The only real question left is: How is it going to be handled?

Here’s the real argument being waged. The ‘public’ arguments for not putting women into ground combat can be summarized as:

Then there are the hidden, more visceral arguments:

Essentially, all this can be summed up as: Men are from Mars, Women are from Venus. For a lot of people, there’s an even deeper, emotional feeling, a very powerful one that lurks just below the conscious. It can be expressed as: It’s just wrong! Unfortunately, the “should women fight” question is ultimately as futile as the “can” question.

There is actually only one important question left at this point, and that’s “will.” Will women be fighting in ground combat, in the US Armed Forces, in the not-too-distant future? Well, take a deep breath. Whatever your views on the subject, no matter how strong they are, the answer is obvious. Women serving openly in the combat arms (Armor, Artillery, Infantry) is here, right now, on the event horizon, staring everybody in the face. Just ask the Army Chief of Staff, or the Commandant of the Marine Corps. Nobody knows what these two gentlemen think of all this in their heart of hearts, but they clearly see the cultural handwriting on the wall. And, no, they are not just temporarily caving into political pressure. If you believe that, you haven’t looked too closely at what’s happening behind the scenes.

It is happening because of a sea change in American culture. Right or wrong, the younger generations have a vastly different attitude about both women, and equal opportunity. It’s the same sea change that has so swiftly changed the landscape about gay marriage and gays in the military. It’s toppling all sorts of things that were virtually unthinkable just a decade ago.

Its here now, staring us in the face. No matter what you believe, women are on the verge of gaining real equality of opportunity in the military. It is inevitable. That’s the only word that applies at this point: Inevitable. And the only real question left is: How is it going to be handled?

Is it going to be opposed tooth-and-nail, dragged out as much as possible and made as ugly as possible for as long as possible? Thats certainly a possibility. We have a situation here with a lot of strong parallels to racial desegregation post-1948, parallels in terms of scope of cultural change, depth of emotional resistance, stress on unit cohesion, and the force of cultural inevitability (though obviously not regarding fraternization and pregnancy). That integration certainly didnt go well, faced as it was with a deep emotional/cultural resistance within the military, a general over my dead body attitude that dragged on, in one form or the other, for decades. Will we see that again? We certainly have a core of professional pundits and politicians circling around, a core with a vested interest in stirring things up, more than willing to provoke it to the bitter end.

Or have times changed? Have our leaders learned from the past? Is the military itself different now? Racial integration was forced on the military by their civilian superiors in both the late 1940s and the 1960s. Are military leaders at all levels going to take a deep breath, apply a bit of foresight and get ahead of the curve this time? Are people going to stuff their emotions in the closet and take a longer view of the change for the good of the service? Are they going to face up to the deeper cultural implications and move on them? Is what amounts to an inevitable social change going to be guided with some wisdom through the steps needed to create ultimate success?

And make no mistake. Real wisdom is needed. This won’t be easy. Change of this emotional depth will push a lot of buttons on a lot of people. Some pretty big things are at stake. And no matter how difficult this looks now, a lot more lies ahead. Were not anywhere close to the end of this. We’re probably not even looking at the mid-point yet. Anybody who thinks they know what all this is going to look like 20-30 years from now, no matter their viewpoint, is deluding themselves. Maybe SEALs will still be all male. Maybe there will be integrated teams. Maybe there will even be all-female teams. The possibilities are almost endless.

But again, that’s not the point. Women are going to gain equal opportunity to all specialties in the US military. People can argue till theyre blue in the face about unit cohesion and pregnancy and the like, but its all still going to happen. And when it does, women are going to fill a lot of positions they don’t today, a lot of them will be in the combat arms, and in time that will seem normal, as women on ships does now. And at that point in history, whenever it comes, all the current uproar will look like a curious blip.

No, all that matters now is how we get there, how long it takes to get to ‘blip’ status, how much unnecessary stress and pain we expend along the way, how quickly we find the right way to handle it. That is the real debate that matters, and it has only just begun.

A final thought. The real issue here isn’t women in combat at all; it’s our fundamental definitions of what it means to be a man or a woman. Thats whats really changing, and its changing in a deep, fundamental way that is unsettling for a lot of people. That’s what’s driving this whole thing. Women in combat are just the symbolic tip of the spear.

[Photo: Flickr CC: US Navy Seabee Museum
March 2012: A team of seabees selected to build barracks high in the Afghanistan mountains was made up of eight women and no men. Military officials say they are the first all-female construction team to take on a build from start to finish in the Seabees 70-year history. And they did it record time in the barren rocky mountains of the Helmand Province, a Taliban stronghold and the focus of recent combat efforts.]

NATO Has Little to Show from its ...