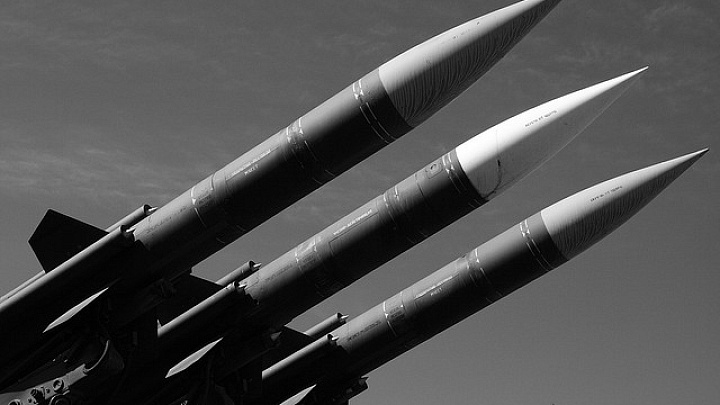 Many U.S. analysts predicted Russia would be content with the seizure and annexation of Crimea. After all, Vladimir Putin permanently secured Russia’s centuries-old naval base and vital port on the Black Sea. But it went on. Pro-Russia forces began to take over eastern Ukrainian provinces and cities. Led by the United States, the West levied sanctions against Russia. It went on. Pro-Russia forces downed a civilian airliner using a Russian BUK anti-aircraft system and continued to advance across eastern Ukraine, even after a further round of sanctions.

There is an uneasy truce in place, but neither side has abandoned its claim. Nor is this a permanent solution. If the history of this conflict so far is anything to judge by, expect Russian aggression in Ukraine to continue soon.

Putin continues to test the “surface tension” with America to see how far he can “grow, using masked men and pro-Russian forces, being careful not to “do the provoking ourselves.” Every time Washington believes the pressure is off, Moscow turns it up.

The United States did not foresee Russian actions in Ukraine. At each phase, there were predictions that Putin, making a “logical” calculation, would stop his advances as nothing he could gain in Ukraine would be worth what he would lose due to pressure and sanctions. But their predictions have been wrong at every phase.

Interestingly, this is not the first time American analysts have been wrong about Russian intentions. In 1962, a series of four National Intelligence Estimates—the premier product representing the collective wisdom of the U.S. intelligence community—were prepared for President Kennedy and his EXCOMM. They dealt with events surrounding the 1962 Soviet military buildup in preparation for the stationing of nuclear missiles on Cuba—known today as the Cuban Missile Crisis.

The first two estimates of 1962 (NIE 80-3 and 85-62) considered it was unlikely the USSR would develop a major base on Cuba. As part of a third estimate (NIE 85-2-62), new intelligence showed a build-up of military forces, but concluded these forces were just “advisers” and Soviet forces were not there for offensive purposes.

Growing intelligence on the build-up in Cuba changed the situation. SNIE 85-3-62 was released in September. The key conclusion was, though the Soviets could obtain strategic advantage by stationing nuclear weapons on Cuba, it considered doing so would be inconsistent with Soviet policy up until that point. The U.S. Intelligence Community considered placing nuclear weapons on Cuba would be a greater risk than Moscow had yet taken. Doing so would signal a major shift in policy.

This estimate was dead wrong and led to a confrontation that brought the world close to the brink of nuclear war. As CIA’s Sherman Kent, then responsible for the NIE process, described it: Khrushchev “zigged” when they expected him to “zag”.

This was Moscow’s “zag. Nikita Khrushchev laid out his “surface tension” strategy against the United States and President Kennedy: “We should increase the pressure, we must not doze off, and, while growing, we should let the opponent feel this growth. But dont pour the last drop to make the cup overflow. Be just like a meniscus, which, according to the laws of surface tension in liquid, is generated in order that the liquid doesnt pour out past the rim. Heres our policy: to always have a wine glass with a meniscus. Because if we dont have a meniscus . . . we let the enemy live peacefully. . . . We must not let him, but we must not do the provoking ourselves.”

In 1962, Khrushchev decided to see how far he could push Kennedy by putting nuclear missiles on Cuba. He believed Kennedy was weak, and, if he was successful, he could obtain major concessions from America. But Khrushchev misjudged Kennedy. The missiles were discovered and the U.S. did not back down. Khrushchev backed down. The Cuban Missile Crisis, among other foreign policy controversies, cost Khrushchev his premiership in 1964.

Like Khrushchev in 1962, Vladimir Putin continues to test the “surface tension” with America to see how far he can “grow”, using masked men and pro-Russian forces, being careful not to “do the provoking ourselves.” Every time Washington believes the pressure is off, Moscow turns it up. Putin believes that America and President Obama are weak. He will continue to take everything the West allows him to. Vladimir Putin recently promised he could take Kiev inside of two weeks. As in 1962, this could mark a major shift in Russian policy. America must recognize and plan for the possibility.

In 1962, the United States faced down Russian aggression. In the words of Dean Rusk, ”We’re eyeball to eyeball, and I think the other fellow just blinked.” So far, America and its allies have been doing the blinking. The Ukraine crisis, like the Cuban Missile Crisis, is a test of American power and leadership in the world. So far we are failing it.