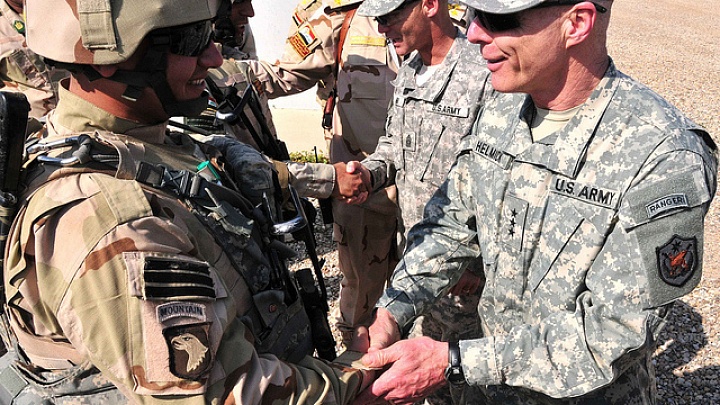 President Obama announced as many as 300 U.S. military advisers may be deployed to Iraq to assist the government in fighting the Sunni extremist group ISIS, which has invaded areas of western Iraq. The White House is also considering airstrikes. In 2012 President Obama withdrew the last U.S. troops from Iraq, keeping a campaign pledge to end the American presence there. The President has promised that American forces will not be returning to combat in Iraq and that military advisers will only be there to assist Iraqi forces to repel the ISIS invaders. But some have called this misleading and pointed out that U.S. military advisers certainly have engaged in combat in the past and will again if sent back to Iraq. But would the deployment of U.S. military advisers mean U.S. troops will be engaged in combat in Iraq again?

I served as a U.S. military adviser while attached to a Military Transition Team (MiTT) in Iraq in 2005 and 2006. Our job was to provide for our assigned Iraqi infantry battalion what they did not have themselvesnamely medical evacuation capability (MEDEVAC), air and artillery support, and certain forms of intelligence. We also facilitated training in administration, logistics, equipment and weapons maintenance, electronic communications, and operational and tactical strategy—all the skills of professional soldiers. We acted as liaison between our Iraqi battalion and its sister U.S. battalion responsible for the same sector. We also evaluated and reported on the readiness of the Iraqi unit to function autonomously. We were certainly engaged in combat, accompanying Iraqi units on patrols and cordon and search operations. Several U.S. members of our unit were killed and seriously injured in combat operations, along with scores of Iraqi soldiers.

Throughout WWII, U.S. military adviser General ‘Vinegar Joe’ Stilwell and his staff provided high-level military assistance to Generalissimo Chiang Kai-shek and commanded Chinese and Western troops as Chiang’s Chief of Staff. Though their role was originally envisioned to be purely advisory in nature, the United States pushed for Stilwell to be placed in charge of all allied forces in the Chinese theatre, something Chiang resisted until the last. Stilwell and his staff had to fight their way out of Burma following Chinese defeat at the hands of the Japanese in 1941, and Stilwell spent the rest of his time in China fighting with Chiang rather than the Japanese.

The re-deployment of U.S. military advisers to Iraq will not automatically mean putting American troops back into combat. But it could.

Perhaps the clearest example of U.S. military advisers becoming engaged in combat comes from Vietnam. Following the 1945 Japanese surrender, France attempted to regain control of its prewar colony, Indochina. They returned to strong nationalist and communist resistance in Vietnam, Cambodia and Laos which they lacked the understanding or will to fight. A small contingent of U.S. advisers were first dispatched to Indochina in 1950 to support the French military, still recovering from WWII and desperately trying to fight the communist insurgency with antiquated equipment. The U.S. mission was to train French forces on new military equipment the U.S. had supplied them to aid France in its fight against the communists.

After the final French defeat of the First Indochina War at Dien Bien Phu in 1954, the U.S. began to directly advise the South Vietnamese government of Ngo Dinh Diem in its fight against communist North Vietnam and their indigenous Viet Cong allies. From 1955 to 1960, the U.S. mission grew to as many as 1,500 military advisers. As the Viet Cong insurgency grew in the South, the number of U.S. military advisers grew exponentially, with over 16,000 U.S. military advisers in South Vietnam by 1963. In an extreme example of ‘mission creep’, the soldiers of the Military Assistance Advisory Group-Vietnam (MAAG-V) and the Military Assistance Command-Vietnam (MAC-V) from 1950 to 1973 moved from a small advisory role to an allied Western military to an open combat role in a grinding Cold War counterinsurgency. They did much more than engage in ‘self-defense’, as once claimed by the Kennedy administration.

But it could. U.S. Special Operations Forces, especially U.S. Army Green Berets, were originally conceived with the intent of training and organizing indigenous troops to become a competent and coherent fighting force to engage in unconventional warfare or to train allied government troops in Foreign Internal Defense or counter-insurgency missions. Building an effective fighting force can hardly be done solely in a theoretical, classroom environment, and even field training under simulated fighting conditions is no substitute for real combat. Special Operations Forces often provide theoretical instruction, followed by field training, and progressing into leading, advising and evaluating performance in combat operations when necessary. If U.S. military advisers are deployed to Iraq, they will likely be Special Operations Forces who possess language and cultural skills and years of previous experience on the ground in Iraq. Anonymous U.S. officials have said the Pentagon would ask for U.S. Special Operations Forces to be on the ground in order to support advisory and intelligence operations there.

The U.S. has already invested billions of dollars, scores of American lives, and six years into training and equipping Iraqi government troops. That is more years of U.S. military training and experience than I had when I first deployed to Iraq myself in 2003. The Iraqi military has been engaged in a counterinsurgency battle on their home turf for years so are not novices to combat. They have already been trained by U.S. advisors. Difficulties in agreeing to an acceptable SOFA agreement with Iraqi Prime Minister Nuri al-Maliki are the reason there has been no U.S. military advisory presence in Iraq since 2012. Now al-Maliki and the Iraqi government want U.S. forces to return.

There is a historical danger a renewed U.S. military advisory mission in Iraq could creep from helping Iraq to help itself into doing it for them. The U.S. may launch airstrikes against ISIS forces—something President Obama has announced he is considering—but they could not do so effectively without trained American controllers on the front lines, which would necessarily place them ‘in combat’—something the President has promised not to do. During the 2011 NATO intervention in Libya, President Obama promised there would be no U.S. presence on the ground and that the U.S. would take a backseat to its European allies. Behind the scenes, paramilitary forces from U.S. intelligence were indeed on the ground in Libya and the U.S. military played a much larger role than was publicly acknowledged.

JCS Chairman Gen. Martin Dempsey, once in overall charge of the American effort to train police and military forces in Iraq, warned that the U.S. does not have the intelligence capability to effectively lead and target airstrikes against ISIS in Iraq. The Iraqi army was not trained or equipped with communications equipment which would enable them to effectively guide U.S. airstrikes. The U.S. was rightly hesitant to train and equip a foreign military with that capability. Arguably only U.S. boots on the ground—filled by troops trained in combat air control—could make the difference.

In sum, U.S. military advisers have historically been deployed in both combat and non-combat roles. While there is a precedent, it does not necessarily follow that the re-deployment of U.S. military advisers to Iraq will lead to mission creep or putting American troops into combat there again. For the option of U.S. airstrikes being employed against ISIS in Iraq to be effective, however, U.S. controllers would most likely have to be on the ground at the front lines. So how does one definitively determine if U.S. troops are “in combat”? This is probably the question that is easiest answer. Forget what the President, Congress, the lawyers, the experts or the media say on the issue. To quote one of Murphy’s Laws: “If you are being shot at, you are in combat.”

Christopher Coker on Prospects for a Great ...