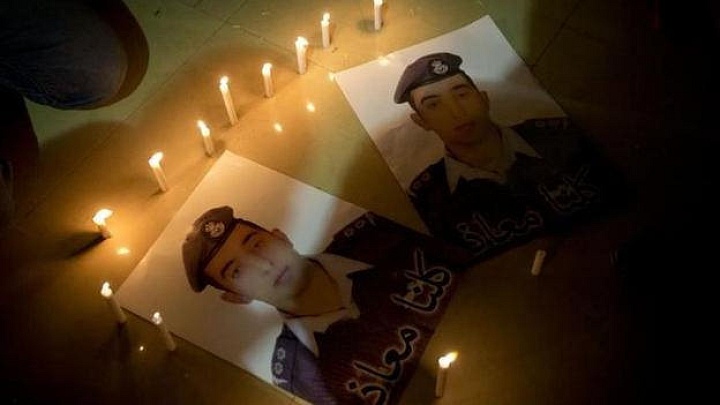 Its been a long time since I last flew tactical aircraft, and I never fired a shot in combat. But I was ready to, and #IamMoaz. I will not bore you with the lackluster details of my own military career. Suffice it to say that I volunteered, I trained hard, and I was prepared to fight and die, if necessary. But I want you to know that, every day I was in uniform, I would rather have broken bread with anyone than fight them. I am pretty sure Jordan’s Moaz al-Kasasbeh was the same way, just like my brothers and sisters in arms the world over. So why do we do it, and how do we justify “breaking things and killing people,” the warrior’s tasks? How can we defeat ISIS without becoming like ISIS?

ISIS executed Lieutenant al-Kasasbeh in what it claimed was eye-for-an-eye retribution for the pilot’s participation in coalition airstrikes. They argued that the Koran justified the pilot’s execution and the method. It is only the latest atrocity committed by the group, but as horrific as it was, it is likely not the worst. The United Nations recently reported that, while the group has been beheading hostages and slaughtering prisoners, it has also been systematically raping, torturing, and killing Iraqi children, even by beheading, crucifying, and burying them alive. There is no equivalency here to coalition operations and Lieutenant al-Kasasbeh’s actions against ISIS, moral or otherwise. None.

American and allied warriors fight with intense calculation, more and more precision, incredible restraint, and even occasional ambivalence. Nothing is more fundamental. Speed, maneuver, flexibility, and surprise have indeed become indispensable tools in our toolkit for modern warfare, especially for what Max Boot has called the “New American Way of War.” But nothing was more important to the way I prepared to fight than calculation, precision, restraint, and healthy doses of ambivalence on my part and on the part of the leaders whose orders I was prepared to follow. My comrades and I need a just cause, and collateral damage breaks our hearts.

Less than 12 hours after video of al-Kasasbeh’s gruesome killing was posted on-line, Jordan hanged two convicted terrorists. The Jordanian justice system had already spoken, but rushing to action is not the answer. We must be careful not to stoke the fires of revenge, which only stokes the fires of terrorist recruiting.

I admit that America has not always chosen the best strategies or tactics in our relations with others around the world. Our results in combat and otherwise have been far less than perfect. And some Americans are less reluctant than others to apply lethal force in protecting our interests and our way of life. But I served with no American service-member or coalition member who was anxious to go to war, unless our brothers and sisters were deployed without us while our countries and our ways of life were being threatened.

ISIS and other terrorists like them are quite calculating, its true; and they have proven that at least their messaging can be precise. But their targets include anyone who does not stoop to their demands or who otherwise fails to measure up to their dictates. Their cause is the enslavement or destruction of everyone around them. They have no concept of collateral damage, because everything and everyone is expendable, including those among their own ranks. No reason for combat precision or restraint. No ambivalence. No understanding of the warriors who oppose them.

Many commentators have weighed in about the concept of just war and how it relates to Chris Kyle’s story, in particular, as he told it in his autobiography, American Sniper, and as portrayed in the film of the same name. Kyle is considered the most lethal sniper in U.S. military history, with 160 confirmed kills. He amassed that record using calculated surprise to apply precise lethal force from a distance, in much the same way Lieutenant al-Kasasbeh would have applied lethal force from his F-16.

Logan Isaac has suggested here in Cicero that snipers are “unjust” or even cowards for pulling their triggers from behind cover. He argued that other high-tech combatants in submarines and high-altitude jets are subject to the same judgment, along with those employing drones, long-range artillery, and the like. The argument is that “think[ing] of war as primarily a strategic endeavor robs it of its moral substance and makes it [merely] an industrial product to be improved, streamlined, and ethically sterile.” But anyone who knows Kyle’s story knows it was anything but ethically sterile. Even drone operators will tell you the same thing. The ambivalence can be devastating. But war is primarily a strategic endeavor, and when a just and vital cause pushes us into mortal combat, those of us who fight must fight using every lawful trick of the trade, despite the ambivalence. Our nations expect no less. Our families and those we love deserve no less.

It would be abhorrent for a nation’s warriors to expose themselves on the field of battle to equal chance of being killed or injured by their enemies, as Isaac suggests. We do not go to war merely to pass the time and see what happens, or for bragging rights about who is king of the hill. When we lose, we die, and our nations lose our service and our protection. If we fight at all, we must therefore fight to win, even as we exercise restraint.

That is the legal language. We operationalize those principles by fighting with calculation, precision, restraint, and ambivalence, even against a foe like ISIS who cares nothing for the law of armed conflict, and exactly as I expect Lieutenant al-Kasasbeh was conducting himself the night his aircraft failed him.

Less than 12 hours after the shameful video of al-Kasasbeh’s gruesome killing was posted on-line, Jordan hanged two convicted terrorists. The Jordanian justice system had already spoken, it is true, but rushing to action is not the answer. We must all be careful not to stoke the fires of revenge, which will only stoke the fires of terrorist recruiting.

Make no mistake: Our coalition must not allow our ambivalence to stop us from doing the difficult but necessary things. ISIS must be rooted out and destroyed, and Lieutenant al-Kasasbeh’s professional family, the Jordanian military, will rightfully be a significant part of that just cause. But the only long-term solution is to destroy ISIS while simultaneously trying to provide alternatives to those the organization has been trying to recruit. We cannot do that without integrated, global military and non-military actions, all characterized by calculation, precision, restraint, and even occasional ambivalence. There is no other path to victory.

Dont Bring Back the Powell Doctrine