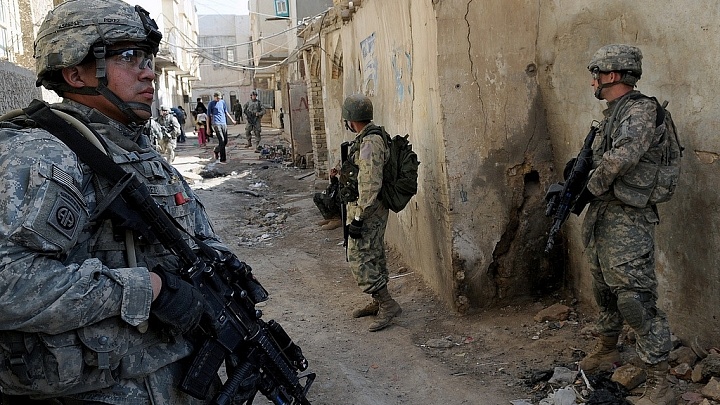 Big war is winnable, but we do not know if or when we have won a small war.

America has not been able to apply its massive military strength against stateless enemies embedded within indigenous populations or tangled terrain in order to accomplish a diplomatic decision. It is akin to the legendary failure of the broadsword versus the scimitar at cutting a silk veil.[i] Our efforts are unsure, inconsistent, unreliable and confused. We stumble around the world like a clumsy Godzilla trampling on cities in its frantic search for a way back home. Our national interests have not been well served by waging small war and repetition will only end in tears once again. Because of these factors, the U.S. is increasingly identified with strategic defeat and political abandonment.

Our guerilla enemy uses strategic jujitsu to turn our overwhelming power into a strategic liability. The enemy is clever, and he can find and exploit the seams in our way of war. Our war-making seams are time, tools and talent (or will, wealth and wit).

Our enemy realizes that the American will to fight springs from our national values. Americans are willing to fight a just war of good versus evil. The good war is against a tyrant who uses his atrocity-committing army with dishonorable tactics to kill and rob innocent people. Patriots will volunteer to serve, everyone will bear the necessary sacrifices and our military will uphold our national honor.

Small warfare for the big power, however, will have no victory parade. The sacrifices are persistent, pernicious and pointless. If war is part of the intercourse of the human race,[ii] then the combatants acquire some of each other’s characteristics and the good guys morph into anti-heroes.[iii] Fighting elusive guerrillas is frustrating, demoralizing and upsetting to the moral compass, and it worsens over time.[iv] The U.S. has occasionally been the aggressor, and our alibi of defending the homeland is unconvincing from its overuse.

A successful military strategy will have a visible effect, so the claim that successes must be kept secret sounds like a cover up for wasted effort. Even if our cause is just, the war’s prosecution can be immoral. The Viet Nam experience showed that when we believe that America is fighting dishonorably, Americans will not tolerate being drafted as henchmen. The individual soldier may be willing to fight with unconditional courage for his platoon mates, but the platoon must have a justification for being there. Pragmatic exigencies are not sufficient validation for dishonorable behavior. The U.S. Navy will never name a ship the USS Waterboard. Eventually, the American public becomes war-weary.

Americans have an algorithm culture and they are more comfortable with the if/then and either/ormechanics of the military decision-making process than with the intuitive, audacious and unpredictable thinking that re-defines the battlefield.

Big war is now prohibitively expensive; however, persistent conflict is even more costly not only in the long term, but also because of the way that it is funded. The cost of the war against terrorism since 2001 is estimated at almost $2 trillion, which probably could have paid for universal health care in the U.S.[v]Our allies in developed nations prioritize their immediate needs to fund social programs over long-term defense spending. Those allies accept a prudent risk from vague threats from terrorists in order to stay healthy and socially and politically stable today. The American economy is the terrorists’ target, and they are hitting it. Our fortune is being poorly spent.

The U.S. defense budget has two parts: base programs to fund the military required by the national military strategy, and supplemental appropriations for current combat operations. The base military is designed to fight our culturally-familiar, linear and mechanized big war, but that organization is helpless, hapless and hopeless at resolving our recent small campaigns. Tactical success is irrelevant. Thus, only part of our military spending has been useful since 2001, whereas everything would have been useful in a big war.

Americans have an algorithm culture and they are more comfortable with the if/then and either/ormechanics of the military decision-making process than with the intuitive, audacious and unpredictable thinking that re-defines the battlefield. Terrorists, however, have not been militarily educated to any certified standard curriculum of doctrine or process. They are the unknown factor that seizes the initiative.

[i] In legend, King Richard of England meets Saladin who demonstrates the superiority of a well-suited light weapon, deftly handled, against a heavy weapon unsuited to the task by splitting a silk veil wafting through the air with his thin, curved scimitar. The western broadsword would never cut the veil.  Saladin’s point was that the crusaders could not conquer highly mobile Saracens in Palestine (unverified).

[iii] Friedrich Neitzche, Beyond Good and Evil, Aphorism 146 (1886), about looking into the abyss and becoming monsters. We emerge from a war having assumed some of the attributes of our enemies as part of our national character. *The Patriot Act, for instance, has infringed on American citizens’ rights in ways usually associated with totalitarian regimes such as the Nazis, Fascists and Communists.

[v] “According to data compiled by the Mercatus Center citing the Congressional Research Service, the cost of global “War on Terror” operations (including both Afghanistan and Iraq) since 2001 had reached about $1.6 trillion by FY2014. When war funding approved by Congress for FY2015 is taken into account, the total reaches $1.7 trillion.  The majority of that funding, some $1.562 trillion, has been allocated to the Department of Defense. The “War on Terror” is proving extremely expensive compared to past military campaigns. Putting the cost into context, the bill for the Vietnam War comes to about $686 billion when adjusted for inflation.” Forbes online, 02/03/2015.