UK General Election: There Are No Votes in Defence 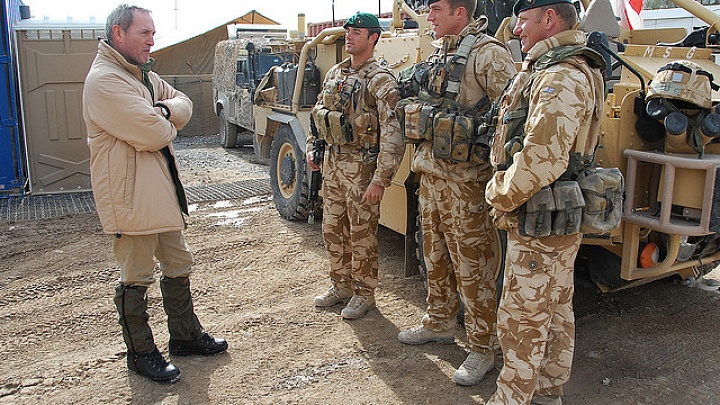 The astute reader may have noticed the “c” in “defence” contained in the title – these words weren’t spoken by an American. It’s actually quite hard to imagine such a statement coming from a public figure in the U.S. Issues such as defense, foreign affairs, and America’s place in the world are consistently major issues of contention in U.S. elections. Instead of being spoken by a nihilistic foreign general or pacifistic journalist, however, they allegedly came from Philip Hammond, the UK’s Foreign Secretary (and former Defence Secretary), in the run up to the British general election last week.

If this UK election is news to you, you are not alone. The election process by which Britons pick their government is swift in comparison to America’s presidential elections, which now stretch well over a year. The indifference the international community has shown towards this election has also been remarked upon. In any event – and to the surprise of almost everyone – David Cameron’s Conservative Party was returned to power for another five years with a majority government, removing the need for another coalition.

How UK Defense Measures Up

By all accounts, one would have expected defense to have been a significant factor in this election. Concern that Britain will not meet the NATO target of spending 2% of GDP on defense for 2015/16 abound at home, despite Cameron lecturing other states at the NATO summit last year for failing to reach this target. Adding to these concerns, the latest projections from the Royal United Services Institute (Britain’s leading defense think tank) have Britain falling below 2% for the first time since records began.

Unease abroad also grows – especially from America. Over the last year and a half, high profile criticism over Britain’s defense cuts has come from Robert Gates, President Obama, General Ray Odierno, and Samantha Power. With the constant coverage of ISIS atrocities and Russian bombers repeatedly flying close to British airspace, it’s not surprising that the former head of the British Army, Lord Dannatt, suggested that defense and military issues may be vote winners in these uncertain times.

Current UK defense policy risks creating a military which can do everything hypothetically and nothing practically.

Despite the alarm surrounding where Britain’s defense policy is heading, out of 17 key issues for British voters, defense came joint 11th, with only 5% of those polled identifying defense as a vote-changing issue (in comparison to 47% for healthcare and 35% for the economy).

This rather grim figure has been reflected in the public debate in the lead up to the election, with the only defense issue mentioned in the leadership debates being Britain’s nuclear deterrent, Trident. The Conservatives declaring that they would renew Trident with four nuclear weapons-capable submarines was actually the only big defence policy announcement of the entire campaign. Even this was turned into a sideshow, though, by the Defence Secretary using the announcement to make a personal attack on the Leader of the Opposition, Ed Miliband.

While his aides may have denied that he said it, it’s completely understandable why Philip Hammond said that there are no votes in defense – there certainly weren’t in this election.

Even still, the main parties made a point to keep up a tough façade on defense. The Conservatives consistently moved the goalposts to appear competent. When the UK moved from being the country with the fourth largest defense budget in the world to the sixth last year, the Conservative government slyly began referring to another measure which ranked the UK fifth. In their election manifesto, too, they correctly claim that Britain is spending 2% of GNI on defence, but the claim that this is a NATO target is wholly false. As mentioned earlier, NATO countries aspire to 2% of GDP, not GNI. Despite strong rhetoric on the international threats Britain faces and how they would meet them, the main opposition party, Labour, made no defence announcements during the campaign and avoided making virtually any tangible defense promise in their election manifesto.

The only party to actually say they would meet the 2% defense target was the UK Independence Party, who are known for their firmly right-wing policies and gaffe-prone candidates. While they gained the third largest share of the vote in the election, it was certainly their anti-Europe stance and hard-line immigration policies which delivered this and not their defense policies. Such policies are incidental for the vast majority of the British public. The Green Party, for example – another party to gain a significantly larger proportion of the vote than in 2010 – maintains that the UK’s defense budget is severely bloated as the UK isn’t under the threat of immediate invasion.

Undeniably, the only international issue which was dominant in this election was the role of Britain in Europe, with UKIP firmly opposed to the EU and the Conservatives split on the issue. As the latter party have promised an in/out referendum on the issue in 2017, this will continue to be the dominant international issue in British politics until this date (and possibly beyond). Almost certainly, defense will continue to fall by the wayside.

The 2% target is arbitrary. It doesn’t even make sense to be met by some countries, such as Canada and Germany. The target was only established as an aspiration to combat shrinking defense budgets of European NATO countries. Looking at comparative defense budgets can also be unhelpful as they say little of military capability and can be misleading in what can be included as “military expenditure.” For Britain, though, both are currently relevant considering the recent trend in British defence spending amid claims that Britain is becoming a less capable ally to America and NATO. In some ways, the 2% target has become a “red line” – one which is almost certainly to be crossed in this financial year.

From a practical point of view, things are also pretty dire. Britain is without an aircraft carrier for the first time since the First World War following the decommissioning of HMS Illustrious in 2014. While the Royal Navy is currently constructing the largest aircraft carriers they have ever fielded – the HMS Elizabeth and HMS Prince of Wales – the first one to be completed won’t enter service until 2020, presenting a worrying gap in Britain’s ability to project force across the world. Moreover, as the F35B fighters won’t be ready for operations on these carriers until 2021, this extends the period in which Britain cannot project airpower from the sea. It has even been suggested that the U.S. Marine Corps could operate squadrons from the carriers until Britain’s F35B are ready.

These big-ticket “omnishambles” (and Trident) are also receiving a disproportionate amount of the shrinking defense budget as military personnel numbers and their regular equipment suffers, creating a military which can do everything hypothetically and nothing practically.

Following the last Strategic Defence and Security Review in 2010, the British armed forces have been put on a path which will see overall strength diminish, with reservists being looked to to fill in the gaps. The Army is set to shrink to 82,000 regulars while reservists grow to 30,000. Whatever you may think of getting reservists to fill the roles of regulars, this reservist recruitment target is looking more like a pipedream with each passing month as the Army continues to suffer from recruitment and retentionissues. Speaking to a former high ranking representative of the reserves earlier this month, it was made clear to me that there’s simply no appeal to being in the reserves anymore.

Perhaps this lack of appeal is linked to the growing apathy towards defense matters among the British public more broadly. Maybe war weariness plays some role in this. There’s also the possibility that Brits simply don’t care for punching above their weight on the global stage or that the threats of Russia and Islamist extremism don’t appear as scary as they once did. Whatever the reasons, politicians have tapped into this apathy, paying lip service to Britain’s place in the world, but doing very little to ensure that Britain actually plays a prominent international role anymore.

The next Strategic Defence and Security Review is due to be held this year. Both at home and abroad, the corresponding report is likely to be hard to swallow and may require some deep soul-searching regarding what the UK really wants to achieve in the coming years. Defense may not win votes in an election, but it’s vital if Britain wants to remain relevant on an increasingly crowded international stage.