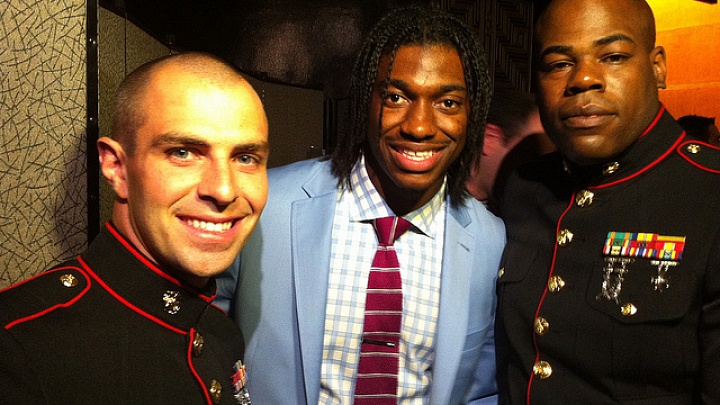 On the face of it, the photo looks inspirational: Seattle Seahawks cornerback Richard Sherman posing next to three men in military uniform. Similar uplifting sighs play across NFL stadiums and jumbo-trons each fall. For deployed troops, catching NFL games on AFN is a little taste of home when away from home. It seems only natural that there should be a relationship between the two.

Yet it turns out that many such gestures to honor our troops are faked and little more than ways for NFL teams to pick up extra money. An investigation by a New Jersey newspaper found that the Pentagon pays NFL teams millions of dollars for such photo-ops.

Here is breakdown of payments to NFL teams since 2011 (which may explain why the Atlanta Falcons appear the most patriotic):

Now, before we rush to judgment, some might say: Well, the NFL is one of the biggest recruiters for the U.S. military. What’s a few million dollars if it generates interest in young teenagers enlisting?For military PR and recruiting, it is understandable and excusable. They have to get their message in front of potential candidates. Others might say that paid promotions are part of the game. What’s the difference between saluting the troops and watching a car insurance ad? The problem is that, unlike, say, a Bud Light spot that purports to “support the troops,” we know the latter is a paid plug, whereas when we cheer on the troops during an NFL game, we think it’s a genuine endorsement for our armed forces by the league, not some kind of quid pro quo that requires play-acting on the part of the NFL.

The NFL has an ick problem. Everything it touches, from Roger Goodell’s astronomical salary to its cover-up of brain injuries among its players to its see-no-evil approach to domestic violence, is icky. Let’s see if that stops it from making tone-deaf decisions like accepting Pentagon handouts to appear patriotic to its fans.