The Case for Coalitions of the Unwilling 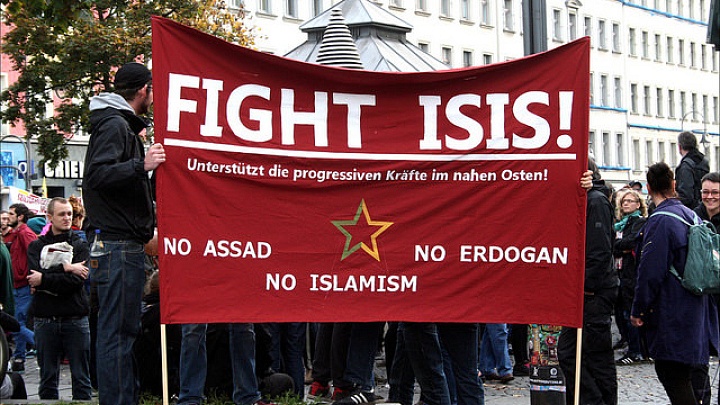 For months, it was believed that the patchwork of 40-plus countries recruited in the fight against ISIS looked weak and wobbly. Who can forget that Vice President Joe Biden had to recently apologize to not one but three Middle East allies — Turkey, United Arab Emirates and Saudi Arabia — for accusing them in public of secretly abetting the Islamist rebels. Worse, the vice president was not factually incorrect in his assertion.

But then something remarkable happened. After much contentious back-and-forth, Turkey and the United States appear to have reached a tentative agreement on two fronts: The use of Incirlik and other bases, and the formation of a de facto no-fly zone in northern Syria. Iranian fighter jets, too, have joined in the fight against ISIS. No, the process has not been pretty. But in the long term, an alliance of strange bedfellows may actually be more helpful to prevent countries from shirking or contributing only token support.

This viewpoint is backed up by Stephen Gent, a scholar at the University of North Carolina, who found that when there is complete consensus on an issue, we get a “free rider” problem. That is, smaller countries assume others will do their bidding. The inability to prevent genocides in Darfur and Rwanda provides a case in point.

But when there are major disagreements over interests, countries are more willing to intervene jointly — since it gives them greater say in shaping the policy outcomes. Thus, the diversity of the coalition assembled against ISIS should be its strength, not weakness.

This is also akin to what international relations scholars call “buck passing,” which can be thought of as a game of musical chairs. Other countries will make concessions to a rising threat — say, Nazi Germany — so long as they are not the last ones standing in their way when the music stops. (Hence, Joseph Stalin signs a secret deal with Adolf Hitler to pass the buck, as it were, to France.)

A big reason we got bogged down in Iraq after our intervention in 2003 was the fig leaf “coalition of the willing” — there was nobody left to hand it off to when the music stopped playing.

To be sure, there are many members of our coalition who do not want to get rid of ISIS if it means empowering Shiites in Baghdad and Tehran. It looks as if Turkey is working at cross-purposes with its coalition partners by sitting by idly while anti-ISIS Kurds are slaughtered in Kobani and insisting on the removal of al-Assad as a precondition of military support.

This is a problem.

Now ISIS appears to be more on the run and Ankara has finally gotten off the fence. Indeed, an anti-ISIS coalition of more diverse interests is stronger down the road than a united one that just rubber-stamps whatever we want. Such diversity also imposes more constraints, prevents mission creep, and lends greater legitimacy to our missions, as Cornell Universitys Sarah Kreps points out in her book, Coalitions of Convenience.

Turkey is perversely a case in point: Among its main interests all along was to impose a formalized buffer zone across much of northern Syria, which now exists, albeit de facto and across a narrower swath of territory, thanks to NATO bombing. Coalitions also make it easier to extricate oneself once the fighting stops and prevent occupations.

Consider that a big reason we got bogged down in Iraq after our intervention in 2003 was the fig leaf “coalition of the willing” — there was nobody left to hand it off to when the music stopped playing. The burden-sharing of a broader coalition, despite all its headaches, is preferable to the costlier strategy of going-it-alone. History shows it is better to have our shaky allies inside the tent doing their business than outside of it.

That is not to say that we will prevent duty-shirking by partners this time around or that our actions will always be legitimized. But the coalition against ISIS is reimagining a new Middle East framework that may have legs to it long after the Islamist threat has receded, as well as open the door for new alliances to emerge to combat regional problems beyond ISIS, including Shiite extremism, economic stagnation, among others.

Maybe the threat posed by ISIS will serve as a wake-up call, one that serves to unite the Middle East. That is, after all, how NATO formed in the first place.

Lionel Beehner is coeditor of Cicero Magazine, a Ph.D. candidate at Yale, and a visiting scholar at Columbia Universitys Harriman Institute. He is a former senior writer and term member at the Council on Foreign Relations, and is a member of USA Todays editorial Board of Contributors.

Free Speech, Self-Censorship, and the Cartoon that ...