Size of U.S. Army Should be Determined by Needs of Victory 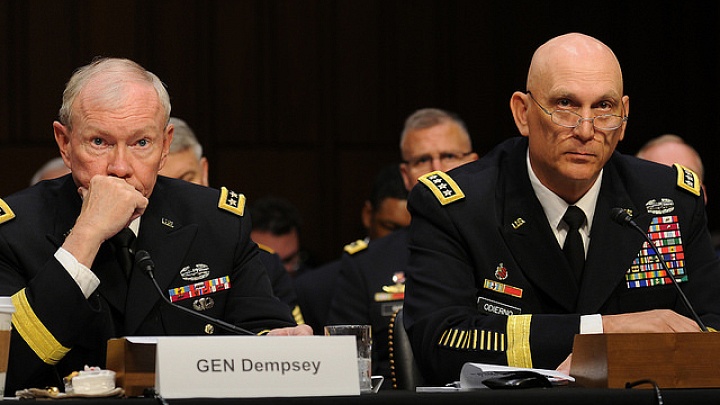 Some countries want big armies, though no countries want to need big armies; but all countries want to have the armies they need, when they need them. Now that the United States has been compelled to join the fight against ISIS in Iraq and Syria after hoping to end more than a decade of wars in Iraq and Afghanistan, our country needs to reconsider the plans for what the U.S. Army should look like, now and in the future. That has to include examining why countries have armies at all, and how the army our country needs may be different than the armies other countries need.

What’s an Army Good For?

The U.S. Army has recently reexamined itself with its October 2014 release of the new Army Operating Concept (AOC) and its annual meeting of the Association of the United States Army in the same month. A large part of the motivation for the Army’s soul-searching has been the significant end-strength reductions the service faces at a time when challenges abound.

The Pentagon’s Fiscal Year 2015 budget proposes to cut the Active Component Army to between 440,000 and 450,000 soldiers, which would make the force smaller than at any time since the beginning of the mobilization to fight World War II. Under sequestration, the force could be further reduced to 420,000. The question is: How small is too small, and for what?

At its 2011 peak during the wars in Iraq and Afghanistan, the Active Component Army numbered 570,000. That’s a lot, compared to 420,000; but at its peak during the war in Vietnam, the Regular Army numbered more than 1.5 million. At its peak at the end of World War II, it numbered almost 8.3 million. The disparity in numbers resulted from lots of things, including major differences in the enemies we faced and in the span of the theaters in which we faced them, as well as improved efficiency and effectiveness throughout the U.S. Joint Force, and with it the reduced need for massed troops. But Army Chief of Staff General Ray Odierno’s foreword to the AOC reasonably insists that, “Conflicts in the future, like those in the past, will ultimately be resolved on land. Hence the [AOC] recognizes that Army forces will be essential components of joint operations to create sustainable political outcomes while defeating enemies and adversaries who will challenge U.S. advantages in all domains.”

Our Army’s massed forces will not be the key to success at most or any of the world’s numerous impending flashpoints; but the absence of a mass-able force may be the key to our failurethe math has to be about winning.

Military conquest is clearly not our wont as Americans, at least not in the last 100 years or so, and not in the strictest sense of the word. Military power projection and interventionism are more our current bailiwick, as necessary ways to protect and advance complex national interests that span the globe and frequently come under attack from threats of all shapes and sizes.

Even the recent American occupations of Iraq and Afghanistan were, in large measure, merely interventions from which we couldn’t quickly disentangle ourselves. Those occupations are undoubtedly also episodes which no reasonable Americans hope to repeat anytime soon, even those of us who believe boots on the ground need to be an option, as we hunt the terrorists of the so-called Islamic State within the borders of Iraq and Syria, and wherever else they materialize. Why boots on the ground again? Because wherever we “compete” we should play to win.

When Secretary of Defense Chuck Hagel rolled out the Fiscal Year 2015 Defense budget in February, with Army General and Chairman of the Joint Chiefs Martin Dempsey by his side, and General Odierno in the wings, Hagel made it clear that the Pentagon’s significant proposed cuts to military personnel – most notably in the Army – were cuts needed to offset necessary investments in current readiness and future technologies, investments that could not be put off. Reducing the Army to 450,000 soldiers would come with risk, he explained, but with less risk than failing to invest in readiness and recapitalization across the Joint Force. This month Odierno backtracked and argued that the right number is 490,000, and that new investments in equipment and training must be made even if we keep those extra 40,000 soldiers. He explained that it cannot be either/or.

Odierno backtracked with good reason. Just since the February budget rollout, a) Russia annexed Crimea, and then instigated and joined a revolution in eastern Ukraine, rejuvenating NATO amidst new fears of Russian aggression; b) significant elements of the Iraqi Army collapsed and retreated in the face of ISIS, while humanitarian crises in the region continued to escalate; c) U.S. soldiers have been ordered to return to Iraq to advise Iraqi forces, as they attempt to regroup to resist and defeat an intransigent and swelling ISIS; d) 4,000 soldiers have been ordered to deploy to Liberia, to provide engineering and logistics expertise in the fight to suppress Ebola; and e) the Army has continued to try to embrace our nation’s increasingly lackluster “pivot to the Pacific.”

Even with so complex a list of challenges, General Odierno cannot possibly foresee the need to grow the Army back anywhere close to 8 million soldiers. In fact, it is not mass he calls for in the AOC, but agile capabilities that include “tailorable and scalable combinations of special operations and conventional forces, regionally aligned and globally responsive combined arms teams, and foundational theater capabilities to enable joint operations.” But an Army of less than half a million soldiers does not leave much margin for all that. The kind of complex world where seven of our 10 Active Component division headquarters are simultaneously currently deployed around the globe is a world straining our Army to the breaking point.

Our country has survived and thrived, because our combined instruments of national power are considerable – and because our power projection capabilities and capacity are dominant, and have been for as long as anyone can remember. Our Army’s massed forces will not be the key to success at most or any of the world’s numerous impending flashpoints; but the absence of a mass-able force may be the key to our failure. As a wise reader of another article of mine said, “Sometimes a weapon is just as efficient for what it prevents as for what it conquers.”

Whatever the number of soldiers we keep in the U.S. Army of the future, the math clearly will not be about our desire to occupy or conquer any ground anywhere on earth; but it has to be about being ready to project strength and engage our enemies and other challenges to our national interests decisively, whenever and wherever the needs arise. Regardless of the level of complexity, and first and foremost, the math has to be about winning.

What Was a Russian Sub (Possibly) Doing ...