On Food, Wine, and War 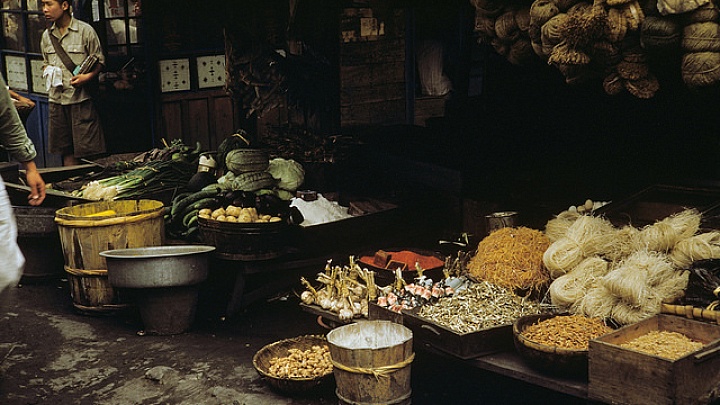 When I was a reporter in post-conflict zones like Georgia, Sri Lanka, and Lebanon, I used to wonder: Does good cuisine correlate with perpetual conflict? The worlds hotspots were bastions of culinary delights, from Bosnia to the Basque countryside.

Until the latest Scandinavian culinary craze, peace in northern Europe appeared to correspond with dull Nordic cuisine. The countries of South America with the richest culinary traditions – Peru, Argentina, Venezuela, Colombia – have also seen the most violence on the continent. I have fond memories of my trip last year to Tanzania – a country at relative peace since its invasion of Uganda in 1979 – but tasting its native cuisine was not one of them.

Perhaps our commonalities in the kitchen can make the battlefield more obsolete.

Perhaps spicy or intricate cuisines, as social scientists say, is “endogenous” to war – that is, maybe playful menus are signs of mixed cultures which may be synonymous with ethnic conflict. Conflict zones tend to straddle former empires. Georgia, which has maybe the best food I’ve tried, has been invaded by the Mongols, the Persians, the Turks, and – most recently – the Russians. Syria has maybe the tastiest cuisine in the Middle East, if not the world. But then again, Aleppo has Ottoman, Armenian, Jewish, and French influences, which you can experience by sampling its puréed dips with walnuts and hot peppers or its soujouk (peppery sausage) and kibbeh (minced lamb). Maybe there is something to this theory. I’m staring at a cookbook in my kitchen right now called Jerusalem: A Cookbook, written by Yotam Ottolenghi and Sami Tamimi, a Jew and Arab respectively. They write in their introduction, “There is something about the heated, highly animated spirit of the city’s residents that creates unparalleled delicious food.”

Lately I do little else besides watch cooking shows hosted by celebrity chefs and news programs depicting a world seemingly on the brink of world war. Perhaps our commonalities in the kitchen can make the battlefield more obsolete. Food has always enjoyed a fond place during wartime (beyond the MRE). I’ll never forget seeing a fast food joint – since closed – run by Hezbollah in southern Beirut called Guns and Buns, whose cheeky slogan was “A sandwich can kill you.” A restaurant in Pittsburgh, Conflict Kitchen, only serves food from countries the U.S. is at conflict with think Cuban tostones or Iranian beef kebab.

Food can be sensitive. Writing in The New Yorker, the journalist Laura Secor got interrogated by Iranian customs agents for inquiring about bread prices in Tehran. Anthony Bourdain got into hot water with the Egyptian authorities when he tried to shoot a segment on “Ful”, the street food that Egyptians gorge on. Food is a weapon of war, which makes its preparers a strategic asset during wartime – there’s a reason why bakers were a popular target for Syrian jets bombing cities. It’s no coincidence why Russia sent health inspectors to shut down its McDonalds, and before that its gaze was focused on Polish meat and Georgian wine two of its least chummy neighbors.

But can food really unite countries and cultures perpetually at conflict? The State Department has launched what it calls the “Chef Corps,” whereby it dispatches top American chefs to carry out a kind of “culinary diplomacy.” It’s a worthy endeavor. Chefs are direct, precise, prickly, and creative just what we need in good ambassadors. In a world seemingly awash in war, the “joy of cooking” can act as both a form of escapism and as a balm to soothe over tensions. “[H]ummus, as Ottolenghi and Tamimi write, will eventually bring Jerusalemites together, if nothing else will.”

Time to send in the foodies.

Lionel Beehner is formerly a senior staff writer at the website of the Council on Foreign Relations, where he was a term member. He has reported from over two-dozen conflict or post-conflict zones. He is a member of USA Today’s Board of Contributors and is a PhD candidate at Yale, focusing on nonstate actors and the use of force.

How Risk of Great Power War Could ...

Paul Staniland on How to Fix Counterinsurgency