Limp into Iraq, Limp Out: Time to Revive the ‘Powell Doctrine’? 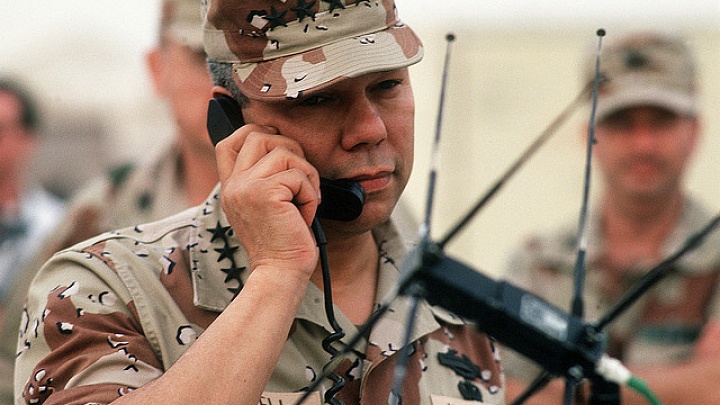 Recently White House and Pentagon officials have hinted that the U.S.-led bombing campaign against ISIS may last many months, if not years. The White House has held firm that there will be no more boots on the ground in Iraq, except the hundreds of advisers stationed in Iraq (and likely hundreds more there unofficially). Regarding troop commitments, the Pentagon has been noncommittal or even made comments contrary to the White House position. If “no boots” holds true and recent history is any guide, expect a protracted conflict with dwindling public support and an indecisive outcome.

The Washington Post recently reported on the trend, dating back to the Korean War: U.S. public support for wars spikes or levels off in positive territory in the beginning, only to steadily decline as time wears on. This makes intuitive sense—war is a terrible thing, and the longer it lasts without resolution, the more unbearable its costs.

Today the U.S. military enjoys full-spectrum dominance over opposing military forces. That includes state as well as non-state actors in virtually every category. America’s capability to inflict losses on its foes at very low risk to its own forces is unparalleled in history. Yet, despite America’s clear military capability to decisively end military conflicts, it has elected not to do so. Both post-9/11 U.S. presidents have chosen to pursue ‘light footprints’ when they go to war.

All of America’s post-9/11 military interventions have, at least by their end, proven unpopular, protracted, and indecisive. George W Bush decided to pursue a campaign in Afghanistan heavily reliant on Special Operations Forces teamed up with local fighters. Though successful in capturing Afghanistan, it did not eliminate bin Laden, his lieutenants, or the Taliban, who snuck across the border into Pakistan. The administration also famously rejected and eventually brought about the retirement of Army Chief of Staff General Eric Shinseki when he held that the troop levels the administration identified for Iraq were too low. Shinseki was eventually proven right. The “Surge” in Iraq was necessitated by the fact that the U.S. did not maintain troop levels high enough to provide security.

The “light footprint,” “economy of force,” and “no boots” mentality has led us into indecisive, protracted conflicts which have cost us billions, something the American public deeply disapprove of. Why would U.S. leaders continue to adopt and pursue such a strategy?

The Obama administration did achieve the 2011 toppling of Qaddafi in Libya by orchestrating a bombing campaign in support of Libyan fighters without committing any ground forces. However, it could not muster support from allies to act decisively early on in Syria, and President Obama has since vacillated over whether and which anti-Assad forces the U.S. should arm or support in the conflict. Now the United States and its allies are bombing ISIS in both Syria and Iraq—perhaps hoping for a repeat of the Libya result. Arguably, the conflict in Syria, with thousands of jihadists flocking there over the last three years, and the alienation of the Sunni of western Iraq by the Maliki government in Baghdad under the influence of Shiite Iran, have created the ungoverned space and fertile ‘hearts and minds’ to allow ISIS to flourish.

Footprints in the Sand

In every conflict it has fought since 9/11, Americas presidents and congressional leaders, both Democrat and Republican, have been keen to utilize the lightest military footprint with the lowest number of ground troops—often zero—that could be gotten away with. Under President George W Bush, it rushed into campaigns in Afghanistan and Iraq without enough ground troops. Under President Obama there has been great deliberation, but that has given way to hesitancy to act in Syria—and again after Assad crossed his own “red line”—which contributed to the rise of ISIS. Whether rushing to war or hesitating to act, the outcomes of all of America’s post-9/11 interventions have all ended indecisively using “light footprint,” “economy of force,” and “no boots.”

Though a majority of Americans currently support taking military action against ISIS, history shows that this support will not be long lived. Yet President Obama remains committed to a “light footprint” and no additional troops in Iraq and Syria. The White House has committed itself to an approach that has proven indecisive in recent history and, therefore, a likely protracted conflict, something which has proven deeply unpopular with Americans over the last 60 years.

America has the military capability to intervene in these and virtually any other conflict decisively. Rare will be the case that it can do so with only a “light footprint,” “economy of force,” and “no boots.”  A few decades back, former secretary of defense Caspar Weinberger came up with a formulation for such a use of force that emphasized overwhelming strike capabilities, clear objectives, and a plausible exit strategy. The strategy was later attributed to his top general, and became widely known as the Powell Doctrine.

Rushing into wars in Afghanistan and Iraq and hesitating and vacillating over a decisive intervention in Syria are both approaches that have failed the United States. Americans are currently supportive of taking decisive military action against ISIS, but we know they will not be for long. Why would the White House knowingly choose a strategy that is virtually guaranteed to lead to a protracted conflict with an ultimately indecisive end?

In any case, whether or not “boots on the ground” will be required to obtain the goal of destroying, degrading, or eliminating ISIS should be determined by the strategic situation, not political popularity or polls. When Pentagon officials and JCS Chairman General Martin Dempsey tell Congress their advice is that the situation in Iraq and Syria does not currently require U.S. ground troops, but reserve the right to change that advice, then the politicians should listen to the generals. If ground forces are necessary to achieve the defeat of ISIS—being the stated goal of the campaign—then ground forces should be used to achieve that goal. With ISIS fighters ten miles outside of Baghdad despite coalition airstrikes, the situation could be changing sooner rather than later.

Perhaps some in high national security positions have misread the lessons of America’s GWOT experience over the last decade. A “light footprint” clearly has not meant a small, manageable war that America and its allies will accept, or one that will bring about a “good enough” conclusion or cost less money. Quite the opposite has proven true. To think outside the “no boots” box, perhaps a larger, decisive, more deliberate war with boots on the ground using the strength of America’s preponderance of force would bring about a swifter, decisive conclusion, thus saving time, effort and money, and better serve America’s strategic interests. The last time the U.S. employed such a strategy of deliberate, massed force was during the Gulf War—perhaps the only Middle East war ever to reach such a decisive conclusion.

The “light footprint,” “economy of force,” and “no boots” mentality has led America into indecisive, protracted conflicts which have cost us billions over the last thirteen years, something the public deeply disapprove of. Why would our leaders continue to adopt and pursue such a strategy? It is strategically unsound and politically and economically unsustainable. Against ISIS, it may be time to bring back the Powell Doctrine.

[Editors Correction: This article originally incorrectly identified Eric Shinseki as Chairman of the Joint Chiefs of Staff at the time of his retirement. He was Chief of Staff of the Army at the time. We apologize for the error.]

How Risk of Great Power War Could ...