Let Iran and ISIS Fight It Out 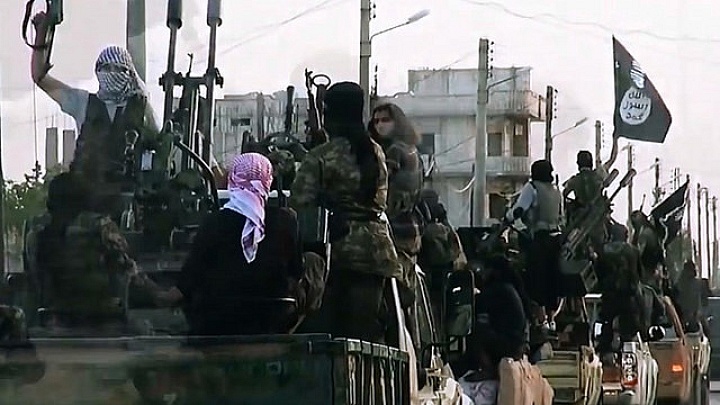 The binary end-state for Iraq seems to be whether the bulk of the country will be controlled by Sunni Islamic extremists or Shiite Islamic extremists. Neither are good outcomes. Yet, the fact that the U.S. is not driven inexorably to choosing a side allows Washington to focus on a more important issue in the Middle East: nuclear proliferation. The largest threat to the West from the region today is not the spread of ISIS or collapse of Syria. It’s the specter of a nuclear arms race in the Persian Gulf. U.S. policy should focus clearly on that issue when deciding whether or not to intervene in Iraq.

How are the two issues connected? Nuri al-Maliki’s role as an Iranian proxy should be fairly clear by now. In the near complete absence of American influence in Iraqi current events, Maliki’s replacement—Haider al-Abadi—was appointed with Iranian approval and unquestionably will be its proxy as well.  While more respectable perhaps than groups like Hezbollah or Islamic Jihad to Western audiences, they will all dance to the same tune played by the Guardian Council in Iran nonetheless. By words at least, U.S. policy seems to prefer the Shiite solution over the Sunni solution. Whether words alone can shape that outcome right now is questionable.

There appear to be few, if any, constants in U.S. Middle Eastern policy in recent history. Sitting governments friendly to America were suddenly abandoned in Egypt and Tunisia after decades of support. Egypt surrendered to the original (in the modern era at least) Sunni Islamic extremists—the Muslim Brotherhood. In Libya, the quasi-secular and tamed extremist, Muammar Qaddafi, was replaced with more orthodox Sunni extremists following an American bombing campaign behind a European facade. The message is that clearly the role of dictator is not a favorable factor in American decision-making.

What Would Machiavelli Do?

Yet when demonstrations rose up in Iran in 2009, by doing nothing we appeared to “favor” the sitting Iranian government. If this shows a Shiite bias, that would be belayed by American acquiescence to a 2011 not-so-brutal crackdown—at least by Middle Eastern standards—on Shiite protesters in Bahrain.  And in the case of Syria, Bashar al-Assad went from “He has to go” to a partner in negotiating chemical weapons disarmament—after he had already gotten use out of them. Ironically, Assad strengthened his diplomatic position with the possession and use of chemical weapons. So Responsibility to Protect (R2P) and WMD “red lines” would appear to have died in the cradle with Assad’s rebirth.

When President Obama decided to partner with Assad for chemical weapon disarmament rather than punish him for gassing his own people, America instantly allied itself by proxy with IranAssad’s essential sponsor.

Whether Shiite or Sunni, revolutionaries or incumbent regime, hostile or friendly, the only universal factor in U.S. policy seems to be whatever the moment requires. If there is a silver lining to this inconsistency, it is that American policymakers are free to pursue tailored foreign policy approaches unburdened by any overarching grand strategy or accusations of inconsistency. A Machiavellian approach applied to Iraq might prove beneficial to American interests beyond the initial geography. A clear limitation to U.S. strategists is the currently high political cost to redeploy meaningful ground combat power in the contested regions. A limited deployment of advisors augmented with tailored packages of air support would probably be accepted in Iraqi Kurdistan. For the objective of defending the Kurds, this would be enough. If we can acknowledge that strengthening the currently eroding value of American friendship is a valuable foreign policy objective, this course of action borders on a “no brainer.” Plucking this low hanging fruit from the tree of strategic options, however, does nothing to define what our strategy should be in the greater Sunni-Shiite contest in Mesopotamia.

The ongoing contest between Shiite and Sunni for spiritual control of the Umma (or community of Islamic peoples) haunts the background of any policymaking in the Middle East. While American policy makers make decisions with the next congressional election dominating their thinking, Saudi and Iranian decision makers think of the long term spiritual future of Islam. Both see themselves as the sole, legitimate representative of the spirit of Mohammad. Washington’s policy of short-term solutions often leads to long-term problems. The long view of both Tehran and Riyadh often leads to short-term problems. Frankly, both Tehran and Riyadh are culpable in the creation of ISIS—Riyadh for allowing funding and support to Sunni terrorist groups, including ISIS, by Saudi nationals, and Tehran for providing direct support to ISIS ‘s forebears during the American occupation of Iraq, which led to the death and maiming of thousands of Americans and a much greater number of Iraqis.

Neither Tehran nor Riyadh, much less Iraq’s Maliki or Abadi, is owed anything by the United States concerning the outcome in Iraq. Is ISIS particularly more repugnant than Hezbollah, Assad, or Islamic Jihad? The Khobar Towers in Saudi Arabia, the Marine barracks bombing in Beirut, the torture-deaths of American captives in the Middle East, and the deaths and injuries from Iranian-sourced Explosively Formed Penetrators (EFPs) in Iraq stand as stark testament to the danger Iran and its terrorist proxies continue to pose U.S. interests. This isn’t to say ISIS is benign; they would attack the U.S. and its interests in a moment if they could. Right now, they cannot. But unquestionably both parties seek war with the “Great Satan” as part of the duty incumbent upon the leaders of the worldwide Islamic extremist movement.

No one in the Middle East views Iraq in isolation. The U.S. should not either. Washingtons decision or indecision will affect its interests from the Philippines to Europe. U.S. planners must acknowledge both the desire of Iran and ISIS to attack and kill Americans. And all online casino parties must look at the various ripples a rock thrown in the Iraqi waters will create. Foremost amongst these second order effects is Iran’s nuclear program which provides a deepening shadow over the immediate challenge in Iraq.

When President Obama decided to partner with Assad for chemical weapon disarmament rather than punish him for gassing his own people, America instantly allied itself by proxy with IranAssad’s essential sponsor. Iran’s nuclear program is not a response to an immediate sense of being threatened.  Rather it serves as a cornerstone of Iran’s argument that they alone have the strength to fight the enemies of Islam in the name of the Umma. The threat of a nuclear Iran was such that the U.S. enjoyed widespread support for powerful sanctions that were having real effect in halting Iran’s nuclear program. The momentum for sanctions stopped the day we decided that chemical disarmament in Syria was more important than nuclear non-proliferation in Iran. Should the U.S. decide that supporting the current Iranian proxy government in Baghdad is in our best interests, whatever remaining leverage we have over Iran will vanish overnight. Quite simply, supporting the current government in Iraq will guarantee a nuclear Iran and sooner rather than later.

The sequel to a nuclear Iran will be, at a minimum, a nuclear Saudi Arabia. Whether the Saudis can convince the Emirates, Bahrain, and Qatar that a shared Arabian Peninsula nuclear umbrella is feasible, even desirable, will determine whether those countries, too, will buy their way into the nuclear club. The Sunni-Shiite spiritual war for the Umma, confined now militarily to Iraq, will evolve into a contest between nuclear-armed foes separated by mere minutes of flight time. This is to say nothing of governments providing said weapons to their plausibly-deniable proxies who have already shown they will target America and its citizens.

This isn’t to say the U.S. should support ISIS. Rather, perhaps a century of supporting European lines derived from the looting of Ottoman territory has simply reached its historical end. War is often the solution to solving intractable problems. Whether Sunnis or Shiites rule the other in Babylonia does not appear to matter to the U.S. or other Western countries. What does matter is whether nuclear proliferation in the Persian Gulf extends to countries and or entities directly hostile to Western countries. Iran will be forced to decide whether ISIS poses a greater threat to the Umma than the “Great Satan.” Should the Mullahs of Qom discover that the West is the lesser of two evils, they would be free to ask for Western assistance against the ISIS onslaught. The explicit price of such support being, naturally, Iran’s nuclear ambitions.

The worst option is to proclaim indecisive support which diplomatically acquiesces to Iranian demands yet does nothing to actually influence events on the ground. The degree of support required to beat back ISIS in Iraq is not a politically feasible course of action. Washington will not do it. Legitimate Sunni grievances will not be addressed or disappear following a U.S. bombing campaign in support of an Iranian proxy army.  And certainly the long-term occupation required toyet againrebuild a fractured Iraqi society is currently impossible.

Since Iran and ISIS both wish to fight America as soon as they defeat the other, perhaps American interests are best met in letting them fight it out and for as long as possible. If the extremists exhaust themselves while punishing the innocent, the moderate voices we constantly proclaim yet rarely see, such as the Iraqi Kurds, can finally move to the forefront of leadership of the Middle East. At the very least, any support given to one bad option over the other should yield positive results in other arenas. Finally, an opportunity has been presented where “leading from behind,” if not at all, is in America’s best interests. To avoid nuclear proliferation in the region, the United States should stay out of Iraq.

Anjan Sundaram on Life as a Stringer ...