ISIS Is an Existential Threat, but Not to the West 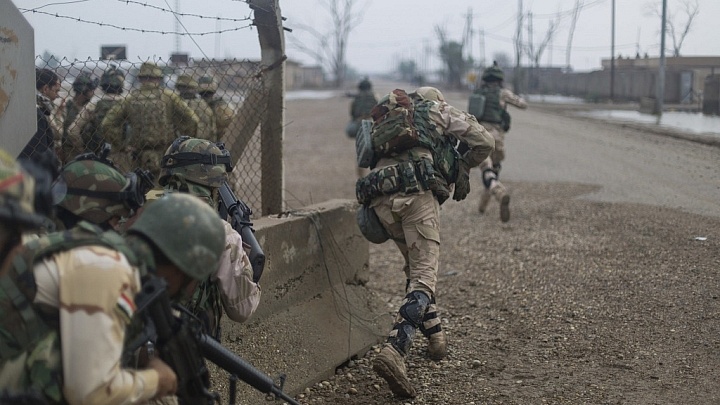 The word ‘existential’ aptly entered the English lexicon in 1941, when borders, governments, peoples and democracy itself were all having their existence challenged by the events of World War Two. It wasn’t too long before this new word was married with “threat” and a cliché was born. Nowadays this phrase is routinely deployed by politicians, columnists and additional concerned parties to propagate, among other things, the case for military action.

One current thorn in the side of many countries which is no exception to the misuse of the term “existential threat” is ISIS. This is not to say that ISIS is not an existential threat – far from it – but it must be framed correctly as such.

What Does ISIS Existentially Threaten?

The most graphic demonstration of how ISIS is an existential threat didn’t come through one of their many terrorist attacks or mass beheadings. While it was a characteristically slick propaganda video, it showed a bulldozer breaking through a sand berm which not so long ago represented the physical Iraqi-Syrian border. It wasn’t as dramatic as the seizure of a city, but it was the clearest example of the existential threat ISIS poses to the very idea of Iraq and Syria.

ISIS does not want to control either of these countries – it wants to take them apart and build a caliphate from the rubble. As one ISIS fighter shouted following the destruction of a section of the border, “we’ve broken Sykes-Picot!” It is no coincidence that ISIS stopped using this name at roughly the same time of this video; they had broken the border between these two countries and so they became simply “Islamic State;” in their eyes, there was no Iraq or Syria to speak of.

Despite ISIS’ questionable history of borders in the Middle East, their very real ambition to eradicate them is an existential threat to the existence of Iraq and Syria as entities due to their ongoing military campaigns in both states. It does not stop with these two countries, however; Iraq and Syria are only the beginnings of their ambitions. This is not the first border we will break; we will break other borders,” one ISIS fighter claimed in another video. It is unlikely that ISIS could take on the might of the Israeli Defense Force, the Turkish military or the Egyptian military, but this claim should not be ignored.

Although both President Obama and Vice President Biden have went on record to say that ISIS is not an existential threat to America or the West, their views are not wholly shared at home and abroad

The Middle East has been a prominent hotbed of dissent, revolution and sectarian conflict for 15 years; demographic changes which the conflict in Iraq and Syria is causing in the region will undoubtedly be a source of instability for countries which already face identity issues – such as Lebanon and Jordan – due to the pressures of handling the influx of refugees. (Gulf States have avoidedtaking in large numbers of refugees, presumably in part for this reason.) Should ISIS’ position be strengthened in Iraq and Syria, these two countries are definitely the region’s low-hanging fruit and they are conveniently on ISIS’ doorstep. ISIS is clearly not as great an existential threat to other states of the Middle East as they are to Iraq and Syria in direct military terms, but the instability they have helped orchestrate in the region could still prove an existential threat to neighboring countries.

Moving away from the Middle East, ISIS’ threats and rhetoric of conquest continue, but the military capability to substantiate such threats only wanes further. Foreign nationals fighting with ISIS from countries as diverse as the UK and China have appeared in videos threatening violence and invasion, while attacks inspired by (and, in some instances, coordinated with) ISIS have occurred in France and the US. ISIS itself clearly lacks the ability to fulfill its ambitions and become a truly existential threat to these states, however. Even now it is struggling to hang onto the territory it controls; it can only help provide resources, training and a safe base to radicalized foreign nationals. At worst, ISIS can aid attacks including the one in Paris last November, but this doesn’t existentially threaten anything apart from those individuals killed in the attacks.

ISIS is only a direct existential threat to Iraq and Syria. In the wider Middle East there is potential for ISIS to develop into an existential threat for some states – notably Jordan and Lebanon – while, despite its (aspirational) rhetoric, ISIS poses no existential threat to any state outside of this region. To listen to many politicians and journalists in Western countries especially, however, you would be forgiven for thinking that ISIS is about to storm the barricades.

Although both President Obama and Vice President Biden have went on record to say that ISIS is not an existential threat to America or the West, their views are not wholly shared at home and abroad. Numerous GOP presidential hopefuls for 2016 have claimed that ISIS existentially threatens the US, while British Prime Minister David Cameron stated that ISIS existentially threatens the West in the wake of the Tunisia beach attack last year, which left 30 Britons dead.

Veteran British journalist John Lloyd wrote after the Paris attacks that Western leaders needed to come round to seeing ISIS as an existential threat to the West. He argued this on three counts – ISIS could acquire a nuclear weapon, they could engage in sophisticated cyber warfare and they are producing a fifth column of radicalized sympathizers in many Western states. Unsurprisingly, none of these counts existentially threaten the West and they are somewhat laughable in their feasibility. Take the final reason and use the UK as an example – it is estimated that about 700 UK nationals have gone to Syria and Iraq to fight with jihadists (ISIS and others). Exactly how is this motley crew supposed to eradicate the British state? All of these reasons warrant serious consideration, but they are better described as reasons to consider ISIS a serious or deadly threat.

A Vanishing Frame of Reference

The cynics among us would argue that politicians and journalists invoke this term to score cheap political points and advance their agenda. For Republicans, it helps push the narrative that Obama is not taking the ISIS threat seriously and needs to do more. For the British Government, it served the purpose of banging the drum for intervention in Syria, while “ISIS is a serious threat which must be dealt with through an appropriate strategy” doesn’t have quite the same impact in journalism as “ISIS is an existential threat which needs to be bombed into oblivion.” No doubt there are elements of truth in this  cynical view, but it masks how most Western societies haven’t faced any sort of military existential threat for a number of generations.

When my grandparents were evacuated from the shipbuilding city of Newcastle upon Tyne to the countryside of North-East England, they knew that Britain’s very existence was threatened by the Axis powers. Bombs were being rained-down upon Newcastle and other industrial centers by the Luftwaffe while Hitler was planning the invasion of Britain. This generation, however, which witnessed the most desperate and uncertain times of their country, is slowly fading away.

Through its overuse (not to mention misuse), the term loses all meaning at best and makes those who abuse it look extremely weak at worst

Even in the very strained era of the Cold War, where global annihilation was always just around the corner, our present political elite have little experience and those who do are increasingly bowing out of public life. David Cameron wouldn’t be born for another few years during the Cuban Missile Crisis and Barack Obama would have just celebrated his first birthday, while Francois Hollande may just be old enough to remember events. Politicians such as these now compromise the bulk of West’s present ruling class, having reached political maturity as the Cold War ended and we entered the 1990s and the “end of history.” It is interesting to note that when Cameron claimed that ISIS is an existential threat against the West, he also declared it is the “struggle of our generation.” Such a statement inadvertently represents the disconnect we in the West face as our frame of reference for actual existential threats slowly ebbs away.

Conflict since the turn of the millennium may have done much to shape the West’s psyche towards war and threats, but they have not been existential. The “long war” against terrorism in locations including Iraq and Afghanistan has forced Westerners to become accustomed to low intensity conflict. Such conflict is quite correctly the “struggle of our generation,” but that doesn’t make it an existential struggle. British newspapers boldly claimed that “Britain is at WAR in Syria” following Parliament’s passing of legislation to that effect last month, while Cameron was able to play the role of the Churchillian leader, but, from Britain’s perspective, it is no war just as ISIS is no existential threat to the UK. Unsurprisingly, in the first month of Britain’s “war” in Syria against an “existential threat,” only four airstrikes were carried out against ISIS – and one of those was delivered by a Reaper UAV.

A threat does not have to be described as “existential” for people to pay attention and take it seriously. Through its overuse (not to mention misuse), the term loses all meaning at best and makes those who abuse it look extremely weak at worst. ISIS certainly is an existential threat, but not to the West. Explain to displaced Syrians how ISIS is an existential threat to the West and they would scoff at the notion. The West’s recent history of conflict may distort our perception of threats as older generations who knew truly existential threats withdraw from public life and fade away, but perspective must be maintained. Through losing our heads and succumbing to sensationalizing threats (while I never thought I’d seriously use this phrase), we let the terrorists win.