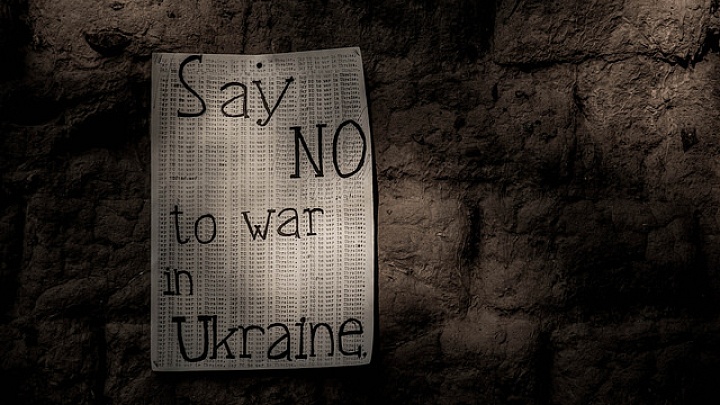 What is our red line in Ukraine? I can’t seem to find any mention of one in any of the president’s or his senior staff’s statements. Closest thing I could find was his former defense secretary telling Der Spiegel, “At some point, we are going to have to draw a line. Based on all kinds of historical lessons, its better to draw that line earlier rather than later.” That’s sound advice. So why isn’t anybody in the administration listening? All we keep hearing is that there is no military solution to the conflict.

Strangely, as a new military authorization on the use of force wends its way through Congress, we never hear that cliché come up. Nobody says about ISIS: There is no military solution, only a political one. They’d be toast, come negative ad time. We seem to treat terrorism as this existential threat that must be met with a military anvil. We dont negotiate with terror. But strangely when it comes to threats posed by states like Russia, we turn into pools of jelly. Only a political solution can solve these crises. There is no military solution, we’re told time and again. Never mind the empirical data that calls this into question (negotiated settlements in stalemated civil wars, though more frequent than they once were, are still rare). Never mind the fact that we’re on our second Minsk agreement to supposedly arrest the fighting, when rebels in Luhansk are salivating to fight more. This policy of ours is puzzling. Why are we forbidden from negotiating with, say, Houthis in Yemen, but we treat Vladimir Putin, who has backed rebels in Ukraine that literally shot a passenger airliner out of the sky and went unpunished, as if he were the Queen of England. Isn’t that terror?

We approach groups like ISIS with a shoot-first policy of shock-and-awe. Yet, when it comes to Russia, we take off the gloves. We prefer “strategic patience” and incrementalism.

We are about to double down on the use of force against ISIS, which at its peak consists of something like 35,000 adherents sprawled across various franchises spanning the MENA region, and meanwhile we are basically giving in to the brutes of this world who can hide behind the façade of sovereign statehood. I don’t get it. I’m not saying that we should be sitting down at the table with al-Baghdadi and breaking bread. But I also don’t think we should be treating Putin as some honest broker in either Syria or Ukraine, who just wants peace. Russia still denies its forces or arms are even in Ukraine, and yet we are supposed to treat this kind of earth-is-flat deniability as an entry point for negotiations. No wonder that the midnight ceasefire has already been violated several times (Recall that even last September’s Minsk agreement held for a few days before completely collapsing under Russian pressure).

When all is said and done and historians look back at his era, they will scratch their heads at our diabolical foreign policy. Here we are about as hawkish as they come when a threat derives from a violent non-state actor like ISIS, which may pose a real threat to our allies in the region, as well as to U.S. residual forces, advisers, and aid workers there, but poses practically zero threat to our homeland (not to mention that our track record at using military force to vanquish groups like this has been abysmal at best). Yet when we are faced with the literal rewriting of international norms and borders, we crawl into a little ball, as if we had no military deterrent, no Air Force, no intelligence, no preparations or road maps for what to do were Russia to eyeball its expatriates in the Baltics or Crimea as a pretext for annexation. Why is it when the threat comes from a fellow state like Russia, we turn into Jane Fonda and talk about war as if it were this abstract thing that only rogue states do, even though our conventional military is best equipped to counter and deter other conventional militaries, not ISIS militants.

Arms and No Influence

We approach groups like ISIS with a shoot-first policy of shock-and-awe. Together with our partners we’ve carried out over 2000 airstrikes against ISIS targets in Syria and Iraq since last summer. The results so far are unimpressive: ISIS has only taken more territory. Yet, when it comes to countries like Russia, we take off the gloves. We prefer “strategic patience” and incrementalism: Let’s steadily increase the pressure by slowly toughening sanctions, by steadily sending in more defensive weapons, by creating all the conditions for an Angola-like proxy war, checking our mental boxes of having done something but in the process virtually guaranteeing that our side cannot emerge victorious. You cannot exert strength by being patient. For Putin, patience and incrementalism signal weakness, a Western doormat. Our sanctions might be hurting the Russian economy, but as a tool of propaganda, they’re the gift that keeps on giving. They scream: We can hurt you further by tightening sanctions, but we are showing our hand that we are unwilling to match you militarily.  As Leon Panetta nicely put it: “The one thing that I remember from all of my intelligence briefings and my dealings with the Russians is that… you have to deal with them from strength, not from weakness. They understand strength, and if they feel that their opponents are weak, they will take advantage of it.”

Coercion is getting our adversaries to capitulate without resorting to brute force. Yet as Daniel Byman and Matthew Waxman write in The Dynamics of Coercion, limited uses of force – soft power, sanctions – are only effective because of the adversary’s perceptions and vulnerability to future force – so if that threat is taken off the table, there is no coercion. This is not a call for amassing US or NATO forces along the Dnieper River or for talking to terrorists. But it is a plea, in game theoretic terms, to stop signaling weakness to our state adversaries while conversely trying to signal military invincibility to our non-state adversaries, when we’ve got it exactly backwards.

The agreement in Minsk is literally a do-over, only the rebels control more territory this time and Russia feels more emboldened, thanks to divisions within Europe. Even the leaders of the countries would not dare put their signatures on the Minsk document their deputies signed it. If ever there were a steaming pile of supposed “peace,” this is it. And this is not to blindly treat Ukraine as a victim. The 5,000-plus dead have included civilians needlessly targeted by both sides. They both appeared to be racing to kill as many of the enemy as possible before the ceasefire went into effect over the weekend, a kind of sprint to the starting line.

The thought of hashing out not one but two laughably imprecise peace treaties in Minsk should offend anyone who’s read their Thucydides or Kennan (not to mention anyone who lost loved ones aboard MH17). I cannot imagine that our statesmen are this naïve. I really cannot. But then I scratch my head and read the terms of the treaty and think: Really? They agreed to this? I guess the alternatives are so worse that a laughable treaty is preferable to a looming war.

Ah, but here comes the conventional line: Putin cares more about keeping Ukraine than we do about losing it. I hear this often. But this assumes that our preferences (and his) are fixed in stone. And it’s worth stating that this whole crisis has really little to do about Ukraine, as part of Kievan Rus, or about Slavic brotherhood and so forth. Putin doesn’t care about all that. For him, it’s about not having an important transit corridor and buffer regime that is a pro-European, pro-American toady – remember that prior to 2014, according to Michael McFaul and others, Putin had never whispered a word about taking back Crimea, much less invading eastern Ukraine; he was just responding to events. As Lilia Shevtsova put it, “this is not a regional crisis, but a clash of opposing systems.”

Another common argument is that the threat of escalation is much greater with a state like Russia than it is an outfit like ISIS (even though, per Lindsey Graham, the latter apparently has cells planted all over America). Russia possesses nukes too, so we can’t tick them off or they’ll use them against Latvia. I don’t buy it. Yes, there is a real threat of conventional war over Ukraine the longer we keep trying to punt and sign meaningless peace agreements that are torn up. Arming Ukraine, just like arming and training a few Syrian rebels, is not an optimal strategy either. But we should be doing everything we can to signal resoluteness by not taking anything off the table. This is not a recipe for escalation but an insurance against de-escalation. By not doing so we virtually guarantee a kind of Schelling-like game of salami-slice tactics in Ukraine, thus setting the stage for war at a latter date under worse circumstances.

Some Realists say: Leave Ukraine as a “neutral” buffer state. But for Russians, the idea is not to keep such a buffer neutral, but rather to keep it broken, weak, and dependent. Others might say: Ukraine just ain’t worth it. These folks are right. The state of Ukraine is not worth fighting or dying for. And I frankly think flooding Kiev with cash or arms, given its sad level of corruption, is a risky move. But it’s not about Ukraine. It’s more about protecting a cherished international norm, enshrined in the UN Charter, against the use of force to seize other states’ territory. Think the norm is unimportant or no longer in relevant? Well, there have been next to zero interstate wars over the past few years and state death as a result of conquest is (mostly) a relic of the 20th century. Putin, meanwhile, thinks he’s fighting the Peloponnesian War all over again.

If you prefer an international order of land grabs and “little green men,” then let Russia have Ukraine. But careful what you wish for.

Lionel Beehner is formerly a senior writer and term member at the Council on Foreign Relations, and current PhD candidate at Yale University. He is the founder and co-editor of Cicero Magazine.