Fixing Military Intelligence Gathering, but of the Medical Kind 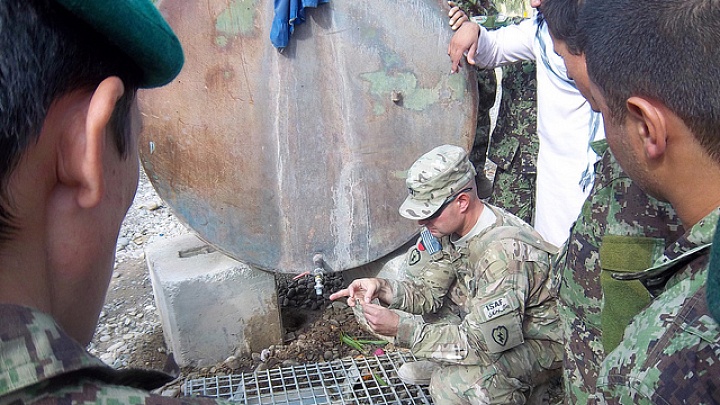 Exploring the history of military preventive medicine, one thing becomes certain: Science and humankind have made significant progress in preventing casualties due to disease and injury. One outcome of this “progress” is that as warfare continues (and it will), fighters will be more disproportionately affected by battle injuries from the weapons of war and less so by the sequelae of war. This may not be as sexy as discussing the latest weapons systems or other hard force-multipliers, but Force Health Protection (the application of military preventive medicine) and medical intelligence gathering have serious impacts on military readiness and will continue to have significant impacts on victory.

While historical records become more limited as one travels back in the history of the US at war, it is safe to assume that most Disease Non-Battle Injuries (DNBI) casualties were due to water/food-borne diseases (cholera, dysentery, salmonella), infectious diseases (smallpox, influenza, tuberculosis, syphilis, typhoid, wound infections), and insect-transmitted diseases (malaria, dengue, yellow fever, encephalitis). Each came with a heavy toll on the fighting effectiveness of affected units.

Take malaria, for example. During the American Civil War, between 1861-1865 the disease accounted for more than 1.3 million episodes of illness and some 10,000 deaths.  It has been estimated that 50% of white soldiers and 80% of black soldiers got malaria annually. Later on during WWI, according to Bernard Brabin, military malaria surveillance statistics from all theaters of the war indicate that at least 1.5 million soldiers were infected, with a case fatality rate up to 5%. During WWII, roughly 60,000 US troops died in Africa and the South Pacific from malaria. In Vietnam, malaria caused more casualties during the war than battle injuries and reduced the combat strength of some units by half.  Over 40,000 cases of malaria were reported in US Army troops between 1965 and 1970.

In contrast to the past, the present state of preventive medicine and Force Health Protection looks much better. During the years 2004-2013, with more than 2.5 million US Forces deployed in Iraq, Afghanistan, and other worldwide assignments, less than 5,000 cases of all arthropod -transmitted diseases occurred.  As a result of the advances of preventive medicine, diseases such as malaria caused almost zero deaths and had no negative influence on the readiness and combat effectiveness of our forces.

Fixing Force Health Protection could potentially save taxpayers $100 billion over the next half-century. Most importantly, it will provide the most advanced protection possible to U.S. military personnel by eliminating unintended risks and protecting their health.

Preventive medicine will continue to minimize the risk of such battlefield diseases.  There are at least three areas important for future investment: Antibiotic resistant organisms, mental health, and deployment exposure to occupational and environmental health (OEH) threats.

What are OEH exposures?  How in the world could contaminated soil and burn pit smoke, toxic industrial chemicals and materials, and chemical, biological, radiological, and nuclear (CBRN) agents be of concern to preventive medicine and national security?  Such exposures may not have immediate detrimental effects on combat effectiveness, but recent history shows they can cause severe chronic health problems and carry a tremendous healthcare cost burden in ensuing years.

The recent disclosure of “thousands of abandoned and highly dangerous chemical weapons” in Iraq to which American and Iraqi troops were exposed between 2004 and 2011 remind us that the United States “has an obligation to ensure our deployed personnel are aware of potential threats and prepared to defend themselves.”  We must formally and systematically apply the operational risk management (ORM) philosophy and process to risk assessment, risk decision making, and implementation of risk controls to accept, mitigate, or avoid OEH exposure for deployed forces.

Current Defense policy requires operational commanders to consider both immediate and long-term health effects in all aspects of operational planning for the full spectrum of military operations—including combat.  But the implementation of that policy today is not timely, systematic, or consistent in any of the armed services. As an example, the Institute of Medicine was asked in 2011 to review the “special controversy” surrounding the open burn pit used to dispose of solid waste at Balad, a base near Baghdad and found numerous, significant “limitations of and uncertainties in burn pit information.”

These findings clearly indicated the lack of a systematic approach to environmental or health exposure mitigation, prevention, avoidance, and documentation at Balad, which is only one of hundreds of deployment sites with such concerns during the past decade of war. Further, those “gaps” made it impossible to effectively prove or disprove a connection between exposure and potential acute and chronic health effects. Meanwhile, the concern for burn pit exposures at Balad and elsewhere led to the recent establishment of a Department of Veterans Affairs (VA) registry to allow veterans of the past 20 years to document their exposures and concerns.

Aside from the toll OEH casualties can have on the readiness of individual units by taking fighters out of commission, there are also tremendous costs in financial terms that, even years later, continue to impact national budgets. This aspect is underlined by its impact on defense budgets in the era of “sequestration.” For example, in 2010, almost $2 billion of the nearly $15 billion in annual VA disability payments were for Vietnam-era Agent Orange exposure-related ailments. At least 25 percent of Gulf War vets were affected by various exposures now termed “Gulf War Illness” (between 175,000 and 210,000 veterans).  Annual costs are not yet available, but could range into the billions of dollars per year for the next 30 to 40 years of VA care.

Potential exposures may cause chronic health concerns for our current combat veterans. Some subset of the more than 2.5 million combat veterans in Iraq and Afghanistan may have been exposed to a wide variety of environmental hazards during their service that may cause chronic health concerns. Potential hazardous exposures include CBRN agents, dust, burn pit smoke, cold and heat injuries, indiscriminate releases from nearby (host-nation operated) refineries and industrial facilities, and to a lesser degree, chemical agent-resistant coating paint, chromium, and toxic embedded fragments. Annual costs are not yet available, but may range into the billions of dollars per year for the next 40 to 50 years of VA care.

Deployed military personnel have self-reported exposure concerns. A June 2014 Armed Forces Health Surveillance Center report indicates that 16 percent of all DOD active duty (about 150,000 servicemembers) and nearly a quarter of all Reserve DOD personnel (just under 50,000 Reservists) deployed over the previous year self-reported “exposure concerns” on their post-deployment reassessment health forms.  Concern rates were much higher during the years of intensive deployments in Iraq and Afghanistan.  A new approach will leverage recent advances in doctrine and technology to significantly enhance Force Health Protection for deployed military personnel ashore.  At the end of the day – taking care of deployed US military personnel is a core DOD value and our duty.

Fixing our Force Health Protection could potentially save taxpayers $100 billion over the next half-century. But to do so, we need a common, comprehensive deployment health program and standard operating procedure that standardizes two important but presently unconnected programs: Pre-deployment medical intelligence and the recently introduced occupational and environmental health OEH site assessment (OEHSA) program.

The next-generation of measures should use information-visualization software in combination with geographic information systems to expand the focus of pre-deployment medical intelligence to include an assessment of environmental and occupational health exposure concerns in combination with more traditional infectious disease threats. This program must evolve into medical-intelligence preparation of the operational environment.   This new assessment should be produced via a simple request from the deployment planning cell to a single designated “one-stop shop” staffed with the appropriate experts to provide actionable courses of action to operational planners early in the pre-deployment stage. Then, combat and/or contingency conditions permitting, trained personnel and equipment must be systematically deployed to carry out the site assessment process for each deployment site. Within weeks of site establishment, a conceptual site model and systematic sampling analysis plan must be developed, sampling conducted, and analysis completed. That analysis will provide updated courses of action for leader decision making.

Deployed U.S. military personnel must develop a next-generation solution that expands and improves the existing pre-deployment medical intelligence program, then systematically merges it with a refined OEHSA program to provide operational commanders with a prioritized assessment of site-specific, exposure-related health issues prior to deployment that is continually updated and refined as onsite exposure validation occurs.

Such an approach will greatly improve Force Health Protection measures for deployed personnel and permit operational commanders to balance the early detection and mitigation of a variety of defined health threats with other demands related to mission success.  Imagine a program that makes real-time assessments of deployment site conditions; provides prevention, mitigation, and avoidance course of action recommendations to operational leaders; and properly documents all unpreventable OEH exposures.

The next generation of Force Health Protection measures to contain occupational and environmental hazards will provide commanders with an awareness and understanding of concerns with recommended action plans unlike anything ever available in the past. It will be centralized, systematic, timely, and accurate; greatly expand quality and content of the current pre-deployment medical intelligence and OEHSA programs; provide actionable, risk-management-based force protection recommendations for commanders to consider; and save substantial Defense healthcare and VA disability dollars. Most importantly, it will provide the most advanced force health protection possible to deploying U.S. military personnel by eliminating unintended exposure risks and protecting their health.