Failure of State: They Fired the Wrong Guy 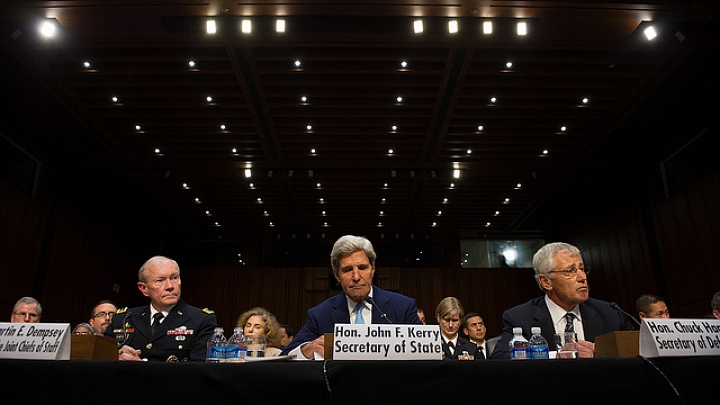 The firing of Chuck Hagel as Secretary of Defense raises more questions than it answers. Is it correct to blame military failures on the military establishment when the executive has not articulated a foreign policy based upon clear and sustainable national interests?  Is it proper to criticize the Secretary of Defense for discussing foreign policy issues when the Secretary of State has failed to bring forth a coherent foreign policy? The state of play in Washington, not only currently, but over the last decade, is that the military is being used to make and execute foreign policy, often on the fly, because the State Department is AWOL. This change in President Obama’s cabinet is a distraction from having to deal with the dilution of the role of Secretary of State and the Department of State. They fired the wrong guy in the wrong department.

The Department of Defense has 3.2 million employees, including service members and civilians, and an annual budget of about $550 billion per year. Contrast this with the Department of State with 70,000 employees and an annual budget of $57 billion per year. The Defense Department as it exists today is a relative newcomer on the block, having only been formed in 1947. President Truman signed the National Security Act 1947 which established a unified military command and re-established a foreign intelligence agency, later evolving into CIA. It also established the National Security Council, National Security Resources Board, and established the Air Force as a branch separate from the Army. It also set up the current Joint Chiefs system and established that the “National Military Establishment” was to be controlled by a single Secretary of Defense.

America certainly was not new to war in 1947 and it certainly had had an established military structure that led it through WWI and WWII. In 1949, the Department of Defense replaced the Department of War. This was more than just a change in name and orientation. It immediately established defense as an ongoing, growing, and neverending enterprise that arguably contributes  to today’s wars without end. Only ten years after this reorganization, President Eisenhower, the former Supreme Allied Commander, warned us against allowing the aggrandizement of the “military-industrial complex.”

Besides the exponential growth in size and expense that Ike predicted,  the continual expansion of the duties of the Department of Defense has promoted a diminution of the culture of the warrior in favor of the culture of management and the corporatization of the US military. Rather than studying military strategy, DoD senior managers get MBAs. Rather than following Lee, Patton, or Schwartzkopf, they follow Ford, McNamara, and Gates. Its top-level concerns are more akin to those of a department within a multinational corporation than a national military. The DoD now has assumed many of the functions of the Department of State with the Joint Chiefs of Staff directly involved in foreign policy formulation and the Department of Defense having its own growing intelligence agency, the Defense Intelligence Agency (DIA.)

These changes in culture and military structure are directly connected to the decline of the Department of State they eventuated and the inability of the Secretary of Defense to actually wage war effectively today. The exponential growth of Defense has led to atrophy at State. It has led to a State Department unable to develop and articulate foreign policy based upon realpolitik and attainable and sustainable national goals.

Henry Kissinger was quite possibly the last American Secretary of State able to fill the role as required and as it was envisioned. Agree with Kissinger or not, the dominant image is that the Vietnam War was ended by President Nixon and  Kissinger. Who can even name President Nixon’s Secretaries of Defense? Today, Secretary of State is the political position you offer to one of your primary opponents so you can keep them in the game, keep their supporters on board, and keep your friends close but enemies closer. Secretary of State John Kerry has decades of foreign policy experience from serving on the Senate Foreign Relation Committee, but he is also known for his inability to articulate policy well (hence his 2004 presidential loss.)

Secretary of Defense is no better a job today. It is so undesirable a position that President Obama has twice found Republicans to fill it. Its no surprise that the first two candidates to replace Secretary Hagel withdrew from the process. The administration has continually undermined and diluted the influence of the position since Robert Gates left. What right-minded person would want to take over as Secretary of Defense after losing two wars, sequestration woes slashing your budget, bigger fish no one has yet begun to fry, and no clear foreign policy in place? Secretary Hagels replacement, Ash Carter, a consummate Pentagon insider, certainly has his work cut out for him. One would find taking over as head coach of the Oakland Raiders a more desirable job.

The Department of Defense’s management and corporate culture may have been necessary for the Cold War, but this culture seems out of step with evolving challenges throughout the world today—Middle East crises, terrorism, insurgencies, Russian resurgence, the economic strength of China and India, technological revolutions, and globalization, among other issues. These are all problems the State Department should tackle, but its weakness and incoherence prevents it from doing so. What is America doing in the world? That is a question for State to answer, not Defense.

DoD is ill-suited for developing American policy responses to these issues which require a more multifaceted view and evaluations from different angles. The military is supposed to be the hammer, and when you walk around with a hammer everything starts to look like a nail. Unburdening the Defense Department of these problems of state and returning it to acting as a Department of War would allow it to concentrate on being ready to fight and win the nation’s wars if and when that time comes. Having a State Department that has the size and ability to articulate a foreign policy for the Department of Defense to follow would assist in this task immeasurably. The Department of Defense is a mission-oriented organization and should be taking its orders from the top, not making them up themselves as they go along.

[Photo: Flickr CC: Chairman of the Joint Chiefs of Staff]

Colonel Philip Lisagor, US Army (Retired) served 3 tours in Iraq and was part of Charlie Wilson’s war in the mid-eighties, training Mujahedeen in Peshawar, Pakistan. He lives in Northern Nevada where he trains horses and skis when there is snow. He was educated at the University of Illinois and University of Chicago. He was an Ally Fellow at the Harvard-Kennedy School of Government and recently completed an MFA in Writing at Brian Turner’s program at Sierra Nevada College thanks to his GI Bill benefits.

Free Speech, Self-Censorship, and the Cartoon that ...

Sitting Ducks: Move Carriers Out of the ...