Dont Bring Back the Powell Doctrine 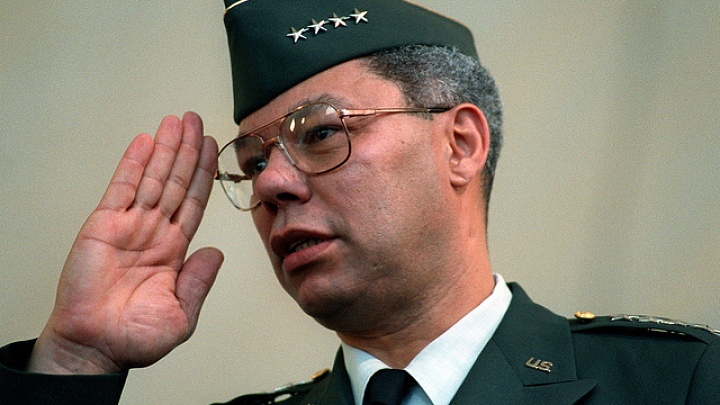 If you ever served in the military or elsewhere in America’s security establishment, you will, like me, have experienced many of the same conversations on foreign or military affairs as if they are running in a time loop. They are often variations on themes.

“Thanks for your service,” an elder male says to me after our brief introduction. “I never served, but today, in today’s world, I tell you, Colin Powell had it right. We need to go in with overwhelming force and end this now and forever.”

“You mean nukes?” I ask. He swirls the remaining wine in his glass and I do the same. This time it happens to be in a wine bar in downtown Truckee, California.

“Not nukes,” he fires back. We disengage and float away—sailing around the room.

The Powell Doctrine is continuously suggested to me by nonmilitary types as a solution to many of America’s national security problems. Usually these people are just angry and often non-militarist. I believe their support or belief in the rectitude of the full application of America’s war machine to the latest conflict, no matter how small or large would surely wane if it ever became more than just idle talk in a bar. They believe in an imagined Powell Doctrine.

In brief, the Powell Doctrine calls for:

Unfortunately, the imagined Powell Doctrine often is parsed down by people talking in bars to only two points, namely overwhelming military force and freedom from civilian political control. This leaves out the majority of what the doctrine calls for—and also the parts that were left out when considering going to war in Iraq in 2003. That did not turn out well.

The Powell Doctrine is a pair of zip-lock handcuffs when it comes to dealing with threats such as terrorism. It sets us up to be either “all in or all out.” It holds that we must either commit the full of our national might and energies to war or do nothing at all.

The problem is that the Powell Doctrine is a pair of zip-lock handcuffs when it comes to dealing with threats such as terrorism and insurgencies today. It sets us up to be either “all in or all out.” We must either commit the full of our national might and energies to a war or we should do nothing at all. When going down the doctrine’s checklist, it is quite difficult to see how America could ever prosecute a “War on Terror” or fully engage groups such as ISIS. The conditions that would have to be satisfied to justify war are too high. Some would consider such high barriers to military action desirable; others see it as foolish.

Conflict in today’s world largely consists of angry individuals, such as Ottawa attacker Michael Zihaf-Bibeau; ideologically dedicated fighters in small cells or forces, such as the Kouachi-Coulibaly group in Paris, and; continuous conflict with transnational non-state actors, such as al Qaeda and ISIS. The massive, superior, and violent nature of the U.S. military and America’s preponderance of force means that any state, organization, or small group must adopt asymmetric strategies and tactics because facing America head on is not an option.

The kind of war that the Powell Doctrine was envisioned to justify or limit America to are not the kind that America’s foes are willing or able to fight. If America followed the Powell Doctrine, no war fought today would be justified. For some, keeping the U.S. from going to war by erecting high barriers is what they want. Others recognize that the world is still a dangerous place and while peace is always preferable to war, threats must be confronted and peace should not come at any cost. You do not always get to pick what kind of war you fight.

The Powell Doctrine, promoted by some as Clausewitzian, is in fact anti-Clausewitzian. It provides a rigid doctrine which goes against the Clausewitzian suggestion that, “The first, the supreme, the most far-reaching act of judgment that the statesman and commander have to make is to establish the kind of war on which they are embarking.”  The wars being fought in today’s anxious and disordered world focus on much smaller use of force where “shock and awe” or terror are the tool used to create political change. They are based on uncertainty. Force needs to be available without the massing of soldiers and fires on the scale of Desert Storm and to fight against foes who do not wear flags or uniforms.

The tactics and strategy at play in the proxy war that Russia’s Vladimir Putin is fighting in Ukraine is an instructive example of this problem. Only those wholly blinded by wishful thinking or propaganda can deny that Russia is directing the conflict there through pro-Russian forces in east Ukraine. Unlike in the “War on Terror”, the real foe here is a state actor with a sizable conventional military capability behind a thin veneer of a civil war and insurgency.

If Russian troops in full uniform had rolled in tanks, trucks, and helicopters across the border and pushed across the whole of Ukraine and into Kiev in a WWII-style blitzkrieg, the Powell Doctrine may perhaps have justified America using military force. Instead, the Powell Doctrine is frustrated and befuddled by the simple employment of a few “little green men” in balaclavas without patches on their uniforms—just enough to maintain “plausible deniability.” They chew away at Ukrainian territory a little at a time like termites; first Sevastopol Airport, then Crimea, and now chunks of east Ukraine.

Those who want peace at any cost are more than willing to buy it. Those who believe in containment are satisfied that it is localized. However, considering that this is not the first time Russia has employed such tacticsrecall Georgia 2008there are signs it may happen again in the medium or long term. There are also signs that the sanctions are beginning to bite hard in Moscow, as are the low oil prices. These may force Putin to trim back.

However, even if Russia goes home now it will still leave with more than it came with.  With some European states already keen to tone down sanctions and return to normal trade with Russia, the temporary pain may have proven worth it for Vladimir Putin to have annexed territory, built his domestic approval to fever pitch, and embarrassed the West. If Putin goes home now, the green men may come back in Ukraine or elsewhere in a few years. Russia will likely recover from the losses when Europe lifts sanctions.

The Powell Doctrine sets a standard too high to justify action against the majority of threats America faces today. This is not by accident. America’s opponents—in Moscow and the Middle East—do their own strategic thinking. They understand that if they employ asymmetric tactics they can easily befuddle an America stuck on doctrines, wishing for peace above all, and still reeling from the divisive effects of two controversial and expensive wars that were unpopular with the rest of the world.

Col. Philip Lisagor, US Army (Retired) served three tours in Iraq and was part of Charlie Wilson’s war in the mid-eighties, training Mujahedeen in Peshawar, Pakistan. He lives in Northern Nevada where he trains horses and skis when there is snow. He was an Ally Fellow at the Harvard-Kennedy School of Government and recently completed an MFA in writing at Brian Turner’s program at Sierra Nevada College thanks to his GI Bill benefits.