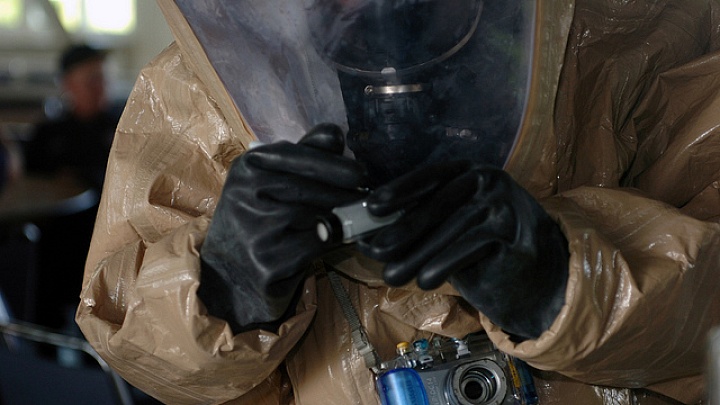 Throughout my 23 years of experience across the full spectrum of Chemical, Biological, Radiological, and Nuclear (CBRN) defense, I have witnessed many changes in the field. Over the last two decades, new technologies have vastly improved CBRN reconnaissance, protection, detection, and decontamination capabilities. Though most of the attention surrounding unmanned systems of late has been focused on the airborne variety, unmanned, ground-based CBRN systems promise further advancements in the CBRN field. In other words, it is time to boldly go with no man where man has gone before.

In terms of military CBRN defense missions, unmanned systems can be used for three general reasons:  First, to save human labor; second, to increase force protection and decrease risk to soldiers and equipment; and third, to conduct operations that were previously not possible with manned systems.

Like any other tool, a robot can save human labor. The person-hours that are best saved by employment of robotic systems are those that are dull, dirty, dangerous, and/or expensive. Tasks required performed by CBRN troops or any troops in a CBRN environment are dull, dirty, and/or dangerous. If a robotic system can replace soldier labor, existing CBRN personnel can be put to better use in more intricate, detail-oriented tasks where human labor is still best and other troops can return to their normal roles.

Troop safety and reducing risk of loss is a critical motivator for the use of unmanned systems in many other settings, such as the use of Unmanned Aerial Vehicles (UAVs) and Explosive Ordnance Disposal (EOD). Any situation or operation where soldiers may be brought into close contact with CBRN materials poses just as much of a risk to personnel as conducting air combat operations in hostile territory or handling explosives, no matter how well trained and equipped operators are. Robotic systems in CBRN operations, as with airstrikes and EOD, can improve safety directly and prevent loss by putting standoff distance between an operator and these dangerous materials.

Anyone who has been through a drive-thru car wash can certainly understand that detailed, heavy equipment decontamination is well-suited for automation.

Robotic systems increase the scope of what tasks can be performed in a CBRN environment. Operating in a CBRN contaminated environment greatly degrades human labor and performance. Even simple tasks require twice as much time or twice as much labor when performed wearing personal protection equipment such as a mask, gloves, a suit, and boots. Unmanned systems do not experience this same performance degradation in a CBRN environment. The level of difficulty of certain tasks that would be laborious to perform for a human in MOPP 4 remains unchanged for an unmanned system.

Certain capabilities impossible for manned systems become possible when they were not before. With robots it becomes possible to send detection and identification sensors into places where it is either impossible or unwise to send people. It becomes possible to lift and move things beyond the capability of soldiers in protective posture and the endurance of robotic systems is greater than human endurance.

Compare requiring a human decontamination squad to work non-stop in full protective clothing for 12 hours. For a capable unmanned system, that is no problem. The need to fully, thoroughly decontaminate equipment and worries about later effects such as desorption of chemical agents is also reduced as a robot is not affected by working in a contaminated and dangerous environment for days on end. Unmanned systems still need fuel, water, and decontamination solution to perform the task, but that refueling and refilling can be performed by another robot.

CBRN reconnaissance capabilities, both “route” and “area”, could be greatly facilitated by robotic systems. Thorough decontamination of terrain and heavy equipment, a dangerous, time-consuming, and laborious task, can be done with far fewer troops—or perhaps almost none at all.

Route reconnaissance for CBRN hazards has always been a troublesome and risky operation. Behind one’s own lines, the CBRN soldier and his systems operate in a relatively permissive environment. But the battlefield often has no or poorly defined front lines. Commanders may find it necessary to send a CBRN reconnaissance element ahead of the main force.

Its already dangerous enough to scout or clear a route containing conventional hazards such as physical obstacles, manned ambushes, and IEDs, but performing such a task in a CBRN environment becomes an even greater risk and hazard. In MOPP 4 in a contaminated environment, even simple tasks such as changing a flat tire become potentially lethal. Any commander can see the risk in sending a squad of Chemical Corps soldiers as an advanced party into hostile terrain ahead of a task force.

A Fox CBRN Reconnaissance Vehicle can protect its crew and operators from the CBRN contamination outside as well as most small-arms rounds, but it is still as susceptible to other conventional hazards as other vehicles. A Fox with its side blown open by an IED provides no protection to its crew. This is why a robust robotic system similar to demining and combat engineering systems suited to the rigors of modern combat operations are at once more survivable and more expendable than a human recon team. Similar systems were devised to work with IEDs. It is not such a stretch to adapt them to perform CBRN functions.

Area reconnaissance and survey was always troubling for me when I served as an Army chemical officer. The concept is simple: Probe toward the suspected site of a chemical attack from every direction until your recon teams have developed enough information to plot on a map the detailed contours of the actual area of contamination, as opposed to whatever template the prediction model of the day says might be there. The warning and reporting systems in use, such as NATO ATP-45, predict where contamination may be, whereas an actual physical survey of the site using detection systems determines with certainty where it actually is.

The prediction models have gotten better, but they are still “garbage in – garbage out” in nature. Incomplete or faulty data leads to an incomplete or faulty prediction. Hard, physical data always beats a predictive model. But a full area recon takes a lot of soldiers, a lot of time, a lot of equipment, and exposes them to CBRN hazards. Robotic systems could be dispatched to do area recons and reduce the number of soldiers involved, the amount of equipment exposed, and conduct the task in less time. Robotic systems can methodically survey with a range of instruments simultaneously while keeping human operators away from contamination when it is found. The platoon-sized element, or even larger, of CBRN or specially-trained troops that would be needed for a detailed area survey could be used for something more suited to their training than tromping through the brush with two or three different detection systems, attempting to record results from them all and relay them, all while suffering from degraded performance in MOPP 4 gear.

Anyone who has been through a drive-thru car wash can certainly understand that detailed, heavy equipment decontamination is well-suited for automation. Decontamination of major combat systems is not just for the safety and comfort of operators; it is about regeneration of combat power in a combat theater. It is about getting tanks, APCs, planes, artillery systems, and the logistics chain back into operation as quickly as possible after a CBRN attack.

In the middle of the night at Pelham Range in Alabama decades ago, I learned very well that decontaminating even a single tank can be a comedy of errors. Restoring a mechanized company or an artillery battery to its full, uncontaminated state of glory is a dirty, dangerous, exhausting, and lengthy undertaking that leaves human decontamination crew drained of energy and the will to live. There is no reason why large robotic systems, such as those based on unmanned firefighting systems, should not be given the majority of the work in heavy equipment decontamination. A decontamination specialist should be able to point a robot in the right direction, activate a program called “M1 Tank decon” and let it rip. Let the chemical soldier worry about making sure that the robot is kept fueled and watered and worry about quality-control on the nooks and crannies. Maybe a robot can take 8 or 10 soldiers out of the operation, leaving one or two for control and quality checking.

An even better idea, though more complicated, would be to develop an unmanned platform that performs area and route reconnaissance, detailed surveys and decontamination almost simultaneously. The benefit would be savings in time and material, as only areas of terrain where actual contamination is found would be decontaminated. This is a much more efficient model than how current, manned terrain decontamination is performed where entire swathes of countryside of hosed with decontaminant so as to be better safe than sorry.

None of this is to suggest that we need to do away with CBRN troops and replace them with robots. The idea is that CBRN troops can devote effort to their best work – the things that need human contact. Commanders have much to gain from “outsourcing” to unmanned robotic systems these serious, dangerous, and burdensome jobs – some of which, in all honesty, will fall by the wayside as CBRN readiness is wont to do given the current security environment, force structure, and military budgetary constraints.

Unmanned CBRN systems would provide the same advantages that unmanned aerial vehicles and ground-based bomb disposal robots convey. Developing unmanned CBRN systems to perform reconnaissance, detection, and decontamination functions would increase to force protection, reduce risk to troops and combat platforms, save labor, time, and material while operating in a CBRN environment, and grant commanders capabilities that soldiers cannot perform as well as robots, while giving soldiers more time to perform the tasks they can perform better than robots.

It is time to boldly go with no man where man has gone before.

Dan Kaszeta has over 20 years of  experience in the defense and security sectors, especially in the field of chemical, biological, radiological, and nuclear (CBRN) issues. He was a member of the U.S. Secret Service as a Senior Physical Security Specialist in the Technical Security Division and in the Chemical/Biological Countermeasures Branch. He currently works with a Croatian firm developing unmanned CBRN systems in the UK. He is an independent consultant at Strongpoint Security and author of, CBRN and Hazmat Incidents at Major Public Events: Planning and Response.

American Witnesses of the Nazi Rise to ...