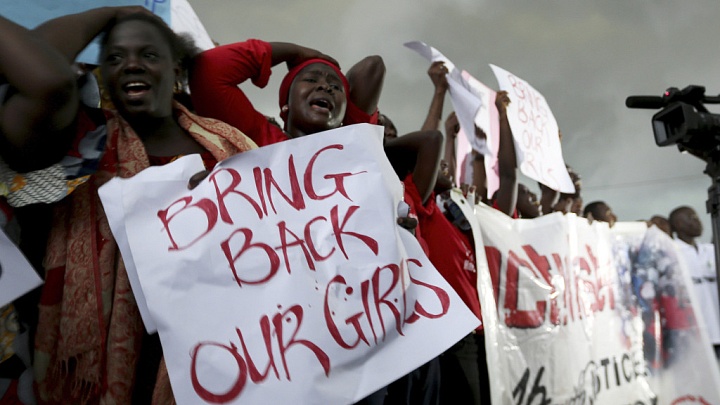 The en mass abduction of almost 300 Nigerian schoolgirls has gripped the world, even sparking a social media campaign to #BringBackOurGirls. The kidnapping has catapulted the Nigerian terrorist group Boko Haram to instant fame. The group has terrorized Nigerian families facing the difficult decision of whether to send their daughters to school and risk being kidnapped or trafficked, or whether to forgo their future and keep them at home. Boko Haram has purposefully employed sexual violence – it has threatened to sell off the girls as brides – not only to achieve a culture of fear but also to internationalize its conflict and make demands on the Nigerian government, including prisoner swaps and bribes. Although active before this attack by bombing churches, bus stops, and targeting civilians, Boko Haram probably never would have imagined its actions would inspire a plea by First Lady Michelle Obama. All of which begs the question: Is sexual violence an effective tool?

From South Sudan to Sri Lanka, the use of sexual violence has become pervasive in recent conflicts. It is often thought that sexual violence and rape are by-products of conflict. But in the late twentieth-century, we began to see rape as an effective military tactic in order to humiliate and terrorize a population. “In modern conflicts, rape is the front line of conflict,” Margot Wallström, the special representative to the UN secretary-general for sexual violence, has said. “It is not a side effect.” Sexual violence is a useful tactic because it not only affects the victim, but the entire community. Yet it comes with serious physical, psychological, emotional, and societal effects that become engrained into generations that deal with this wartime tactic. The psychological effects of being raped or sexually assaulted can vary. Often the victim experiences stigma, shame, PTSD, guilt, hostility, denial, depression, isolation, fear, panic attacks, flashbacks, and sleeping disorders. Often victims are shunned from the community or are criminally punished themselves.

Both men and women can be raped, but women are most often the targets. UNICEF reports that more than 1,000 women were raped each month during the decades-long conflict in the Democratic Republic of the Congo. Approximately 90 percent of women over the age of three in Liberia have been victims of sexual assault, while in Sierra Leone, an estimated 50,000 64,000 women and girls were raped during its civil war in the 1990s. In West Africa, it was also common to take “bush wives,” who would be kidnapped, gang-raped, and then “saved” by a man who would agree to marry them. These women would then be used as sex slaves for these men. A similar dynamic is playing itself out with the kidnapped Nigerian schoolgirls. Boko Haram has threatened to sell them off as wives, almost certainly to be used as sex slaves once married.

What causes a group to use mass sexual violence as a tool? Scholars such as Harvard’s Dara Kay Cohenbelieve it can be used as a socialization tool and can occur more often during ethnic conflicts or in areas with exasperated gender inequality. With Boko Haram, it may also be for the high price of selling almost 300 brides. Many believe Boko Haram is not financially stable and may need the money from selling these girls, in addition to making the provocative statement that Western education is wrong (which is literally what the group’s name means). Despite its pervasiveness, it has taken international courts an extended period of time to acknowledge and actively discourage wartime rape. It was not until the 1990s during conflicts in Rwanda and the Balkans that the international community formally declared rape a crime against humanity and tool of ethnic cleansing and genocide. In 2008 the UN Security Council passed a resolution demanding that all armed groups stop using rape and other sexual violence.

Unless there is a domestic conviction or major international intervention, there may not be justice for these girls. Do not expect the members of Boko Haram to be dragged before The Hague anytime soon.

Yet there have been few convictions under these declarations. The International Criminal Court (ICC) has only confirmed charges against two defendants for rape and sexual violence, despite the intention of the drafters of the Court to give sexual and gender-based violence particular attention. This raises questions about the court’s effectiveness: Although major decisions acknowledge rape as a crime against humanity, little has been done after those declarations to convict the perpetrators. Such a dismal record sadly suggests that Boko Haram will not be held accountable for its recent kidnapping under international law. Unless there is a domestic conviction or major international intervention, there may not be justice for these girls. Do not expect the members of Boko Haram to be dragged before The Hague anytime soon. While the Nigerian government has pledged to hold the group accountable, it has yet to provide any willingness, much less capacity, to find and rescue these girls. Nor is it clear if the government will agree to trade these girls for the release of prisoners (the Nigerian government has agreed to similar negotiations with Boko Haram in the past).

To be sure, negotiating with terrorist groups is neither a popular nor useful tactic, even though it may save these girls and resolve the current crisis. Others believe that negotiations are the only way to “bring back our girls.” Then there is concern that the media frenzy only invites future mass kidnappings by terrorist organizations. Sexual violence has emerged from the shadows as a tool of warfare. It is now time to get beyond the hashtag campaigns and sloganeering, and finally prosecute its perpetrators.