As the Smoke Clears: Tobacco and the US Military 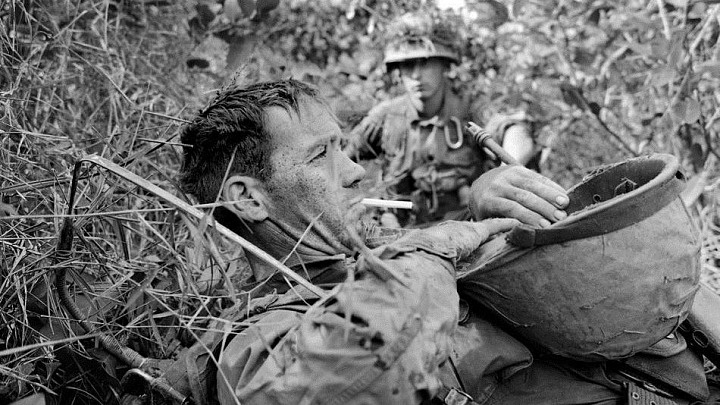 Consider for a moment that at least 108 million people (military and civilian) were killed in all the wars of the 20th Century. Estimates for the total number killed in wars throughout all of human history range from 150 million to 1 billion. It is a horrible thought and a grim starting point from which to start a discussion. Yet, the World Health Organization (WHO) estimates that during the same 20th century, 100 million deaths occurred as a result of tobacco use. Further, they estimate that if current trends continue, as many as one billion deaths will occur from tobacco use in this, the 21st century. How did we get here? How are the paths of tobacco, US history, and war interwoven?  And what can we do to stop this insane ravage of humanity for mere profit?

In 1612, John Rolfe, Englishman and future husband of Pocahontas, planted seeds of a West Indian variety of tobacco that was much sweeter and stronger than that grown earlier in the area surrounding Jamestown, Virginia. By 1617, production and trade with England was underway. In fact, tobacco was so important to the colonists that it became the local currency – used to buy groceries, and for a period of time, to purchase rights to English women who were imported, looking for husbands in the colonies. According to Joseph C. Robert, this “was the most momentous single fact in the first century of settlement on the Chesapeake Bay…tobacco had guaranteed the Jamestown experiment would not fail.” Tobacco’s popularity grew so quickly that local poor indentured immigrant labor could not meet the demand, so a transition to slave labor via the slave trade quickly occurred to accommodate demand. Two problems (tobacco itself and slavery) developed out of this social, agricultural, and economic expansion – each to be realized and confronted in a different time and manner. By the eve of the Revolutionary War, tobacco had become the leading cash crop of the colonies and exports were over 100 million pounds a year, constituting half of all colonial trade with Britain.

By 1860, 350,000 of the nearly 4 million slaves in America were used in cultivating tobacco. The remainder of the slave population was used in cotton, other agricultural activities, and various forms of manufacturing manual labor. As the Civil War began, Confederate policy and military campaigns devastated Southern tobacco planting and manufacturing, and in 1862, in an attempt to encourage the planting of foodstuffs to support the war effort, the Confederate Congress actually recommended that Confederate states refrain from tobacco planting. Most did not, but even so, the centers of tobacco trade shifted to New York City for the north and to Louisville in the west. While the War made it difficult for the public to obtain tobacco, combatants from both sides found it plentiful. For years, the US Navy had supplied its sailors with tobacco rations. In February, 1864, the Confederate Government included tobacco as part of its Army’s rations. And in one of the exquisite ironies of war, in the quiet between battles, Confederate and Union soldiers would sometimes exchange goods – traditionally Northern coffee for Southern tobacco.

Even though the first cigarette rolling machine was invented in 1881, cigarette tobacco use was not widespread in the early years of the 20th century. But World War One changed that almost overnight. Cigarettes were believed to keep soldiers occupied during the long stretches of relative quiet and boredom at the front. They also created a sense of camaraderie when shared among mates. Even associations like the YMCA and the Red Cross, which prior to war had been opposed in principle to smoking, ended up collecting vast quantities of cigarettes for the Boys Over There. It became a sign of loyalty to ensure all of our fighting men had all the tobacco that could be provided; in fact, those that opposed sending cigarettes to the front were accused of being traitors. According to General Pershing: “You ask me what we need to win this war. I answer tobacco as much as bullets…Tobacco is as indispensable as the daily ration; we must have thousands of tons without delay.” And in 1918, the War Department bought the entire output of Bull Durham tobacco and advertised “When our boys light up, the Huns will light out.” As a result, virtually an entire generation returned from the War addicted to cigarettes.

It is very difficult to overcome supremely powerful tobacco lobbying interests, more than a decade of near constant deployment, and the total disconnect between profit and loss (harm) that continues to play out in everyday military life

As part of the war effort in World War Two, President Roosevelt made tobacco a protected crop. General Douglas McArthur made the corncob pipe his trademark by posing with it on dramatic occasions such as his wading ashore during the invasion and re-conquest of the Philippines. Cigarettes were also included in GIs C-Rations. Tobacco companies sent millions of free cigarettes to GIs, mostly the popular brands while the home front had to make do with off-brands. Tobacco companies claimed in 1943 they had rolled and sold a record 290 billion cigarettes. But tobacco consumption was so fierce that a shortage developed. By December 1944, signs lamenting “no cigarettes” turned up in store windows everywhere. Cigarettes eventually became so scarce in some places that a lot of confirmed smokers were forced to end their addictions. Others clung tenaciously to their habit, paying three to four times the standard pack price for their preferred brands on the gray market. By the end of the War, cigarette sales are at an all-time high.

Although there was mounting evidence in the 1950s followed by the US Surgeon General’s report in 1964 confirming the adverse health effects of smoking, the military continued to include free cigarettes in military rations from the Korean War through the Vietnam conflict until 1975. As soon as the Gulf War began, however, tobacco companies were making and distributing free cigarettes for soldiers. The Department of Defense (DOD) allowed the firms to ship 10,000 cartons of cigarettes to soldiers before halting the practice, saying it violated policy. The military assisted tobacco firms in other ways despite this change of heart, such as through allowing RJ Reynolds to put its logo on the covers of magazines sent free to service members.

In 2005, the smoking rate of military personnel was 32.2%, compared to the civilian rate of 21%. The higher smoking rate suggested that certain aspects of a military lifestyle fostered smoking. Those factorsincluded peer influence, combat stress, boredom, and easy access to cheap tobacco products. Another factor that may have led to increased tobacco use was deployment. One study found that among nonsmokers, smoking initiation was observed in 1.3% of non-deployed personnel, while 2.3% were observed in deployed personnel. Among past smokers, resumption of smoking occurred in 28.7% of non-deployed personnel and 39.4% of deployed personnel, while smoking increased 44% among the former and 57% among the latter. Even after leaving the service, many continue to smoke and the prevalence of smoking among veterans was reported to be 27% from 2003 to 2007, and military smoking is strongly associated with increased lifelong cigarette consumption.

It is important to acknowledge two things: 1) tobacco’s harm was not well understood until the 1960s, and 2) that the DOD has tried and continues to try to curb tobacco use. The Defense Health Agency (DHA) and each individual service medical program have developed powerful and productive tobacco cessation programs and they are making some progress. However, it is very difficult to overcome supremely powerful tobacco lobbying interests, more than a decade of near constant deployment, and the total disconnect between profit and loss (harm) that continues to play out in everyday military life.

Here are a few facts from a 2013 report: close to half of all service members used a nicotine product in the past 12 months. Nearly a quarter of active duty personnel (20% of VA enrollee population) were reported to be currently smoking compared to 19% of civilians and the rate of smoking in the U.S. Marine Corps was nearly 31%. Finally, tobacco use reduces physical fitness and endurance and makes personnel more likely to drop out of basic training, sustain injuries, and have poor vision – all of which compromise readiness. Despite all of this, we still “profit” from selling tobacco products at very low prices (and tax free) in our military exchanges.

Putting the human costs aside for a moment – this simply makes no business sense, especially for a “business” that is facing decreasing budgets in an increasingly multipolar and unstable world

In the 2012 fiscal year, tobacco sales in military exchanges totaled $711.4 million and generated profits of $125.7 million for the military’s Morale, Welfare, and Recreation (MWR) programs. Yet, the DHA estimated it spent more than $1.6 billion on tobacco-related medical care, from higher hospitalization rates to lost workdays. Because the DOD is responsible for the healthcare of its constituents, it is the only “retailer” that consistently loses money on tobacco; approximately 10 times as much as it gains in sales. Putting the human costs aside for a moment – this simply makes no business sense, especially for a “business” that is facing decreasing budgets  in an increasingly multipolar and unstable world.

Finally, even the though the dangers of “vaping” have not been thoroughly investigated by the FDA, one can purchase the latest products and appliances in military exchanges at very low cost. Whether we talk of cigarettes, cigars, dipping, chewing or vaping, however, it is clear that at the end of the day what we are really discussing are nicotine delivery devices. As Mitch Zeller of the FDA’s Center for Tobacco Products states: “The issue isn’t e-cigarettesIts nicotine.” And as Charles Lewis writes about the tobacco companies and their lobbyists – “doubt is their strategy” and I would add that death is their product.

So, do individuals have a “right” to use tobacco products? Yes, they do. But military personnel (active, retired, reserve, and families) do not have a right to have tobacco products made available at lower than competitive prices and not subject to taxation. They do not have the right without taking responsibility for their actions by paying a considerably higher, justifiable rate for their increased healthcare costs. Further, the DOD does not have a right to balance profit from tobacco sales (to support MRR activities) against the logarithmically greater loss of readiness, higher cost of healthcare, and poorer quality of life. The DOD must divorce itself from tobacco, a product that is clearly designed to addict. The DOD must cease supporting an industry that profits in death. The DOD must become a leader in defeating an enemy that may possibly cause a greater loss of life in this century than all of the wars in the history of man. It is time for the DOD and Big Tobacco Co-Op to be shut down.

[The purpose of this article is not to place blame but to seek immediate change; it builds on work previously published by the author in The Virginian-Pilot.]

ISIS Is an Existential Threat, but Not ...