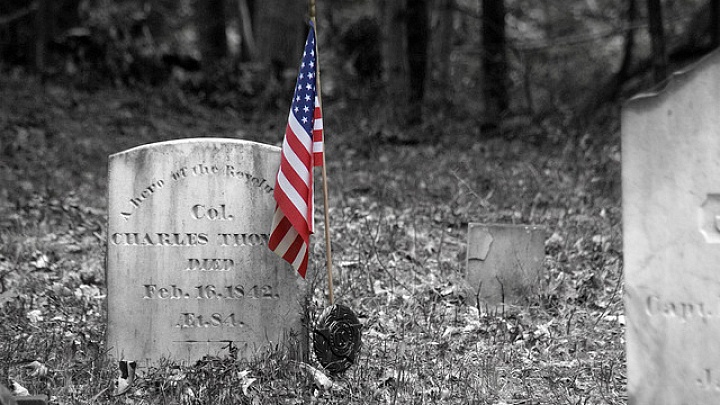 By the rude bridge that arched the flood,
Their flag to April’s breeze unfurled,
Here once the embattled farmers stood,
And fired the shot heard ‘round the world.

Two-hundred-forty years ago this month, the American Revolution began in Lexington and Concord, Massachusetts. Small bands of American farmhands, laborers, and merchants refused to yield to the advance of a professional British army, the best fighting force in the world at the time. These men of different social statuses, ideals, and backgrounds stood together, ready to sacrifice everything with the odds stacked heavily against them. Though what happened there can hardly be called more than a skirmish, the principles they stood for are recognizable.

I recall vividly visiting these two historic towns when I was 16 and reading Emerson’s hymn inscribed on the base of Daniel Chester French’s Minute Man statue in Concord. It sent shivers down by spine. Just two years later, at 18, I joined the U.S. Army and picked up a rifle for America as well. Like most who serve, the patriotic feelings I had then and now had much to do with that decision.

America’s own myths about itself today conjure up images of rugged individualism, American Exceptionalism, manifest destiny, cowboys and Gary Cooper in High Noon, the lone wolf, the reluctant hero, and simple, moral clarity. The narrative of America’s founding, that a colony of people who left behind tyranny and oppression in Europe and fought a global empire against great odds to gain their freedom, is the foundation of this history. Indeed if you listen to the every-day conversations of average Americans today, the rhetoric of its politicians, and the tones of its media offerings, all of it reflects a “tough guy” swagger at the surface. But, sadly, it does not seem to run much deeper than that anymore. The actions do not fit the words.

Every American professes patriotism. But what most actually mean when they say they “love America” is that they love their own lifestyle and their own particular patch of ground.

It is a common sight in America today to watch groups of young men dressed in MMA t-shirts yelling at the television about a football game or a cage fight, though they could hardly make it up two flights of stairs without stopping to catch their breath. It has gotten to the point that most American youths are unfit to join the military if they wanted to, though only around one percent ever do. This despite the fact their country has been at war for 15 years now.

They love to watch the violence on TV, in American Sniper at the movies, or playing Call of Duty on Xbox and are not above an occasional sad, alcohol-induced shoving match that involves more talk than action. But they manage to find excuses when it comes to real violence or danger that has any deeper meaning than sheer entertainment. Many of these same people, as President Obama has put it, “cling to their guns.” A gun does not make for bravery or strength; that must come from a man himself. They buy weapons under the claim of protecting their family and homestead from a vague fear of criminality, yet they will not pick up a rifle for America and head off to war to protect family and home against a clear threat.

On the other side there are those Americans who believe that “violence is never the answer,” though this country – like all others – was founded by and is still protected (to paraphrase George Orwell) by rough men and women who stand ready to do violence on their behalf. The false lessons they have drawn from America’s misadventures in places like Vietnam and Iraq is that war is never necessary and is only designed to protect the interests of the elite, though these “champagne revolutionaries” still take full advantage of consumer culture and economic advantages being an American provides – forgetting that America’s position is built upon the foundation of military strength that protects its interests, economic, political, and otherwise. In their moral relativism, they are willing to believe the worst about America and the best about its foes and quick to proffer arguments that America’s actions “brought it upon itself.” The sentiments of this limp wing of faux Realists are well reflected by those who echo Vladimir Putin’s rhetoric of the West invading Russia’s non-existent “sphere of influence” by trying to pull Ukraine into its fold.

Every American professes patriotism. But what most actually mean when they say they “love America” is that they love their own lifestyle and their own particular patch of ground. Many promise to “fight to the death” against the U.S. government telling them how to live their lives, yet have no trouble telling others – minorities, homosexuals, women they are not married to – how to live theirs. Though they profess “respect” for the military, historically many have no trouble either sending other people’s children to fight for questionable causes, such as the War on Terror, or professing “war fatigue” that keeps America from using strength when it could be decisive, as in Ukraine. When I came home from Iraq, the folks down at the bar did not seem to have grounds to be “tired” of war, except perhaps to say they were tired of hearing about it.

What does it mean to have a culture where few will fight for a country all profess to love? Perhaps American Exceptionalism is to blame. Ironically, those who have hawkish views on American policy, yet do not fight themselves, and those with dovish views on the use of military force unwittingly share similar conclusions on this point. They believe that their version of America is such a special creation in God’s eyes or has reached such a state of enlightened, modern development that the normal rules of history do not apply.

The belief that their ideal American system places this country in such a position that it can maintain its power in perpetuity without having to fight for it is just as ridiculous as the idea that use of America’s military strength is the cure to all ails. This view ignores the sound strategic decision-making which gotten us where we are today. America is not a superpower because it is “exceptional”; it is a superpower because of hard work and sacrifice. American leaders, for their faults, have been surprisingly adept at picking where, when, and how to fight to win. That is a continual, on-going struggle. Such things are not decided once, but again and again through history. Assuming America is exceptional is dangerous. As Thomas Jefferson said, The price of liberty is eternal vigilance.

That is not to say every American should be made to don the uniform; that would be disastrous and unnecessary. America does not need, nor should it pay for, a massive army of personnel, the majority of whom will not see combat. Short-term conscripts as many European militaries have required until recently make for under-qualified and rather useless soldiers. Many Americans are not qualified nor fit for military life or are unable to serve because of physical limitations. However, it appears the number of veterans among those leaders and citizens who adopt the most hawkish rhetoric is on the low end. But this is in line with the American practice of not practicing what we preach.

It seems most Americans are not willing to sacrifice much anymore, for the greater good or otherwise. Despite paying extremely low taxes for a developed country, any talk of raising taxes for the rich, for multinational corporations, to fix Social Security, or to fund healthcare is met with calls of communism. Demanding increases in stagnant wages is shouted down as socialism. “Society” is a dirty word because the thought any money would go to someone who has not “earned it” is repugnant. Unwillingness to sacrifice in war is paired with unwillingness to pay for the greater good.

Ask a veteran if they were paid in line with how hard they work and for what they sacrificed for the greater good of the country. Ask them about hard work. America is underpinned by the strength and sacrifice of those few who are still willing to fight and die for it. This one percent who practice what America preaches is the reason why anyone is allowed to “earn” anything in America. They are the real “job creators.”

The weakness and malaise in America’s system have translated into a pendulum swing in foreign policy terms. The 2003 war in Iraq was started by Bush administration hawks on false pretenses, who then also mismanaged the legitimate Afghanistan war. The pendulum has swung to an Obama administration with a focus on “not doing dumb stuff” and “strategic patience,” which, though it sounds good in principle in comparison to the previous administration’s policies, means a hesitancy that has extended conflict in Syria, Iraq, and Ukraine which quick, decisive action could have decided early on. Neither swing of the pendulum has served America well.

However, this polarized, pendulum-swing nature is also reflective of the divided state of American politics and government. Candidates for office in America are no longer allowed to be moderate or think with moderation. They will not survive in office. They must choose a pole far left or far right in order to raise campaign funds. Campaign cash is the life blood of American politics. Nothing else matters. Candidates no longer have to be informed, nor articulate, nor even intelligent at all. So long as they know which pole they stand by, and take their messaging cues from, the money will come. Many today have the added advantage of having plenty of their own cash to get started with. A majority of those in Congress are millionaires and only a tiny minority have ever served the country in uniform.

The field for the 2016 presidential race continues to expand. Many of those with their hat in the ring or considering it are dynasty candidates (which Americans profess to dislike) or also-rans from previous years which have little chance of succeeding, but beat the drum for certain factions of the left and right. None, so far, seem to stand for the middle ground, moderation, or for the greater good.

Words no longer match deeds. America stands divided politically, economically, and socially. Its foreign policy is adrift without a grand strategy over the last 15 years of the post-9/11 era. There is little sign thus far that things will change in 2016. We are indeed a long way away from those farmers, laborers, and merchantmen who stood together, shoulder to shoulder, at North Bridge in Concord and faced down an empire, knowing it would mean the end of life as they had known it and death for many of them, especially if they failed. The stakes were high then. They are just as high today.

Reports of Assad’s (Pending) Demise May be ...