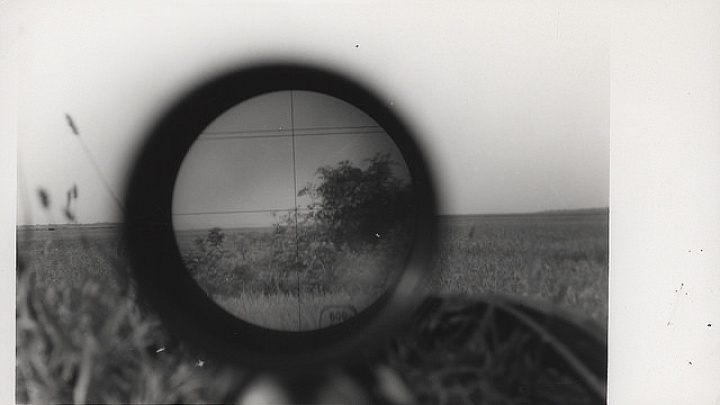 Discussion of Michael Moore’s recent tweet questioning the bravery and honor of snipers following the success of the film American Sniper has filled headlines. While many have sought to rebut the accusation of cowardice, as Matt Victoriano recently did here in Cicero, the wider discussion has largely left out the consideration of “Just War,” as well as the morals and virtue of those expected to kill on behalf of our common good. Though I doubt these deeper issues are what Moore had in mind, moral questioning and obligation in war should always be a subject open for discussion, and those who have been to war are best placed to lead it.

Modern war is now about efficiency, which means war is reduced to merely a zero-sum game. In other words, the winners are those who remain standing the longest. This instinct to think of war as primarily a strategic endeavor robs it of its moral substance and makes it an industrial product to be improved, streamlined, and ethically sterile. Such a framework denies the long tradition called Just War, which moral philosophers and theologians stretching back two millennia have advanced in order to restrain our instinct to resort to violence to solve our differences. It is not strategy itself that is a problem, however; Victoriano’s reflections about killing a thousand insurgents by creating five friends is indeed itself a highly strategic consideration. My concern is that we give terrorist ideologiesboth American and Arab alikefree reign in war if we neglect talk of the virtues of prudential restraint and personal honor as integral to discussions of battle.

An honest person must grapple with their potential culpability in evil and make reparation if called for. If there are just wars, then there are also unjust wars.

Robert Emmet Meagher’s recent book, Killing From the Inside Out, gives a startlingly tragic biography of the just war tradition, citing repeated efforts at restraining war undermined in favor of winning for winnings sake. Hugo Grotius framed war in legal terms in the midst of the 17th centurys liberal enlightenment, because of a “lack of restraint in relation to war: such as even barbarous races would be ashamed of.” Nations pursued war with such fervor that they became the very “savages” they sought to snuff out. Lt. Col. Douglas Pryer has also written in Cicero of the concept of “moral injury” among soldiers—American or otherwise—in history and during the recent Global War on Terror. The morality of our violence is of utmost importance if we are to keep from becoming the evil we wish to extinguish. If survival is our primary goal, on the other hand, we can leverage any and every evil to justify our existence.

That being said, Victoriano’s story of teaching a potential combatant a lesson is powerful and moving. But I did not see what it had to do with his specific role as a sniper (it could have been something one of my infantry company team leaders did as well). In moral terms, snipers are part of a martial category that uses surprise and distance. It is part of their specialty. From Michael Walzer to Hugo Grotius to Saint Augustinewho revived Cicero from certain literary death in the fourth centuryfor war to be moral it must be something like a social contract in which combatants expose themselves openly on the field of battle to equal chance of being killed or injured.

Snipers, insofar as they primarily engage in pulling a trigger from several kilometers away from cover and concealment, are of a kind with submarines, high altitude bombers, drones, and long-range artillery. As a former artilleryman, I too am indicted on this count of potential cowardice. In fact, it is precisely the reason I endeavor within the academic realm to understand war and those who fight therein in order to answer the question: Are we good people? I hope so. But an honest appraisal might prove otherwise. An honest person must grapple with their potential culpability in evil and make reparation if called for. If there are just wars, then there are also unjust wars. And it is up to us to think through the implications of our moral proximity to the necessary evils that our society occasionally calls on us. That is a duty that applies to all, not just American snipers.

I doubt Michael Moore had any of these larger thoughts in mind when he blasted out his tweet about American Sniper. But as bearers of the military tradition, all members of the martial fraternity and I have a responsibility to bear witness to the complexity of war and to the seeming paradox that there is both evil and beauty in war. It requires careful rhetorical surgery to excise the bad from the good. But there are no better people to attempt it than those touched personally by the hellish flames of combat.

Logan Isaac is a combat veteran turned Christian pacifist who has published two books and numerous articles as Logan Mehl-Laituri. He is an aspiring scholar in the fields of political theology and ethics, seeking to bridge the gap between martial and pacifist perspectives. He is a candidate for a Master of Letters in Systematic and Historical Theology at St. Andrews in Scotland, where he currently resides.
Share:
Previous Article

Why Terrorists Do Not Need Territory

Jeff Bridoux on Democracy Promotion in the ...