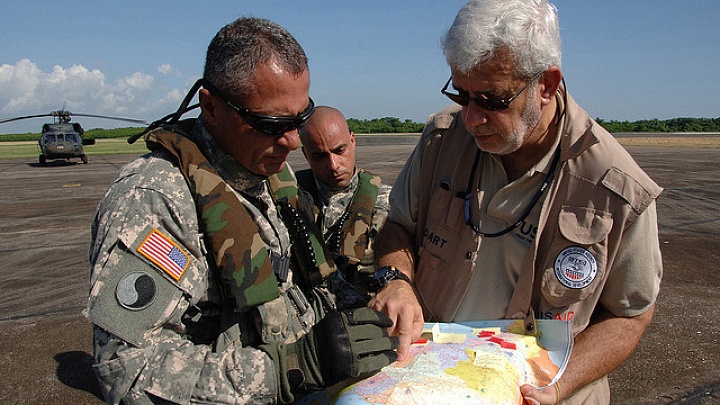 The humanitarian world often has a healthy suspicion of the military. This is understandable. It can be very dangerous for humanitarian organizations and USAID personnel to be conflated with the military, which skeptical locals sometimes consider the same thing as the CIA overseas. However, as a former member of the military I have seen military Civil Affairs units doing good, genuine humanitarian work in dangerous areas . . . winning the hearts and minds.  And I have been out in Iraq interacting daily with the local Iraqis, as have many of my fellow soldiers.

The military and humanitarian organizations both deploy to dangerous areas that have severe needs. But they rarely, with notable exceptions, ever share information, leading to an expensive duplication of effort by the military and aid organizations. In 2007, Ellen B. Laipson hypothesized in an excellent pieceon relations between NGOs and the intelligence and defense communities that information sharing was improving, but that “effective communication [still faced] many hurdles.” Nowhere was this more evident than during the recent Ebola crisis.

One of the clearest examples of the flexibility of mission the military can have during a humanitarian disaster came at the height of the Ebola crisis. As many aid organizations were either pulling their staff from infected areas or struggling to bring enough new people in, the military deployed personnel to these same locations.  Whether that was an effective use of the military is open to debate. Yet overall, the military and humanitarian groups had the same mission: To stop the spread of the disease. What resulted from this cooperation was an unprecedented move by the National Geospatial-Intelligence Agency to share their open source data on a public website. Lee Schwartz, the geographer of the United States, at the State Department oversaw this move. There has been a continuous dialogue between these two particular agencies.

At this time I knew a defense contracting company which was running an Ebola project.  On their behalf I contacted some of my associates at an NGO as well as at USAID and asked whether they would be willing to share their on-the-ground gathered location information regarding checkpoints and clinics for a project. Both groups responded with a resounding no because it might be utilized by the U.S. military-the same military that was rushing into Liberia to help. So, instead the government had to pay for countless man-hours for this same information to be duplicated, not by conducting covert operations, but by scouring open source information. The end result was that the government acquired, for the most part, the same information the aid groups on the ground were privy to and were going to utilize for their mission. Further, it is more than likely these groups on the ground still had better, more credible information.

The defense and intelligence communities have expertise and budgets that allow them to do incredible analytical work. NGOs and USAID often have the benefit of boots on the ground and better cultural understanding. It is necessary for both sides to recognize how they can provide benefit to one another without harming each others mission.

The above example is something I have experienced time and time again while compiling information in the defense arena. Often the intelligence and defense communities are willing to share their unclassified analytical research with other government agencies such as State and USAID, but rarely does defense or the intelligence community get anything in return, even from government counterparts.

Overall, it is necessary for both sides to recognize how they can provide benefit to one another without releasing classified information that might endanger lives on the ground. The defense and intelligence communities have large budgets that allow them to do incredibly detailed analytical work. NGOs and USAID often have the benefit of boots on the ground, which allows for greater understanding of cultural factors and timely data, but lack the desire and budget to do structured analytical work for more strategic purposes.  When it comes to peacebuilding operations all sides likely will see benefits to cooperation and information-sharing.  Most intelligence and defense agency offices already have liaisons with one another and with the State Department in an effort to share information, but this is generally limited to one person representing the entirety of an agency.

I propose that a fusion center be created for information sharing on peacebuilding initiatives. A fusion center can provide a dependable repository of information where liaisons from State, USAID, Defense, Intelligence, and NGOs that want to participate can work together to address crisis situations in a timely manner. For the government elements it would be a cost-effective pooling of resources to avoid duplication. For NGOs it would provide more robust products that larger government resources can provide.

When a crisis such as an Ebola outbreak strikes, it is a waste of time, money and human resources to duplicate each other’s data. Bureaucratic distrust should not get in the way of timely delivery of humanitarian services.

Two Sides of the Vietnam War and ...