200 Years after Waterloo, How will Todays Wars be Remembered? 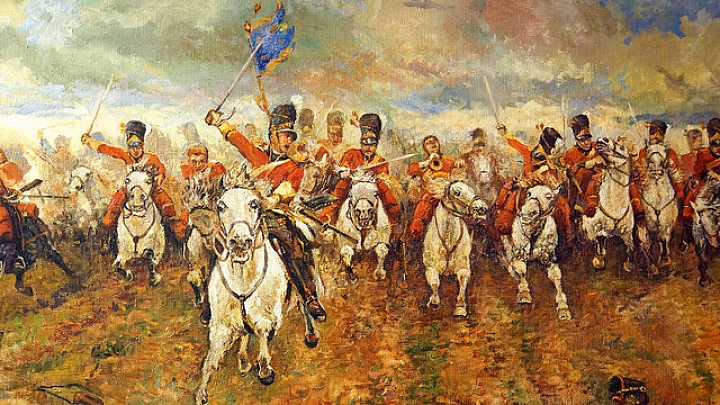 Can you remember the last time the conclusion of a war was widely celebrated by soldiers, politicians, the press and the public? While I may admittedly be a young man, I cannot. There have, however, certainly been celebrated short-sighted victories. In 2011, I remember being in Dublin when Tripoli fell to the rebels and dozens of ecstatic Libyan expats crowded O’Connell Street to celebrate. In a similar vein to that premature celebration,  the words Mission Accomplished as a backdrop for President George W Bush as he declared major combat hostilities over in Iraq – before embarking on over a decade of war – are probably the best example.

In Britain and Belgium earlier this month, the 200th anniversary of the Battle of Waterloo was celebrated. All very patriotic stuff for Europeans, but it has made me reflect on the wars of my generation – in a hundred years or two, how will Americans and Brits view the War on Terror? Not very favorably, I would argue.

Can the wars of today be held in esteem like the wars of yesteryear? It is not an easy question to answer, but I have compiled a number of variables which impact on how a war is or will be remembered.

What sort of “Success?”

The Waterloo Campaign was a victory for the Anglo-Allied force with very few strings attached. Two conventional armies from a coalition of states pushed a third army from a physical location following an intense armed engagement, with there being little asymmetry between the two opposing sides. Consequently, the war came to a close as Napoleon did not have the troops to pursue his objectives and coalition forces closed in on Paris. In this state-on-state conflict, one side had conventionally defeated another and that was the end of the matter. Wellington may have described Waterloo as “the nearest run thing you ever saw in your life”, but it was clear cut in its aftermath – the French force was routed and (after a number of smaller engagements) the allied force was able to march on Paris to end the Napoleonic Wars.

In turning to a recently concluded war, Afghanistan, it is hard to say that success was nearly as clear cut. The initial engagement of the war was fairly conclusive and similar to Waterloo in that a coalition force pushed an army from a physical location. Unlike Waterloo, the regime change which took place afterwards slowly led to a sophisticated insurgency. American, British and other ISAF forces never truly destroyed the Taliban root-and-branch and they were not nearly as willing to fade away after their conventional defeat as the French were following Waterloo. As such, when Britain handed over its last base in Afghanistan, it did so unannounced amid fears it could be targeted by insurgents. In the last two weeks there have been attacks on the Afghan Parliament and residual NATO troops, and there were even fears the Taliban may capture a provincial capital. While it may be a cliché, warfare has become more complex in the last two decades as interstate warfare has become rarer; as a consequence of this, victory has become a vague and fluid concept.

In Britain, the hundred or so years following the Battle of Waterloo witnessed its transformation from a pseudo-democracy to a representative democracy. Britain did hold elections before true democracy, but they were as fair as a Zimbabwean election and only a handful of people got to vote, anyway. As a result, most Britons did not have much of a stake in their country or its far-off wars – so long as Britannia ruled the waves, there was no threat of invasion.  To paraphrase a couple of men of the era and before, war was the trade of kings and could be aptly described as a duel on an extensive scale. In addition, the rank and file of the miniscule (in comparison to its neighbors) British Army of the time was composed of ne’er-do-wells and impoverished Irishmen. As the Duke of Wellington described his army a couple of years before Waterloo, they were the “scum of the earth” – not exactly people the general public would miss. The 23,000 allied troops who were lost were largely viewed as cannon fodder.

The First World War – in theory – was a straightforward conflict where two armies engaged each other and one gained territory as another lost it. But the scale of the war was different, as was Britain. As the nineteenth century wore on, democracy slowly crept into the British consciousness and ordinary people had a greater stake in their country. Wars had to be sold in this era, which led to the popularising of the Empire so that all Britons were invested, with the resulting jingoism enduring up until the War in 1914.

When War came, the mentality was “it’ll all be over by Christmas.” As this holiday passed, it soon became clear that the warfare was entrenched and attritional, with heavy losses – war was total. On the first day of the Battle of the Somme alone, the British Army suffered 20,000 deaths and many more casualties (over double the number of Americans who died in the wars in Afghanistan and Iraq). With a more engaged population both democratically and in the War, the horrendous losses which were sustained have been harder to celebrate with glee – only solemn remembrance.

The Waterloo Campaign had far reaching consequences for Britain and the world. It finally brought to an end the Napoleonic Wars and ushered in Pax Britannica, which led to relative peace in Europe and the rest of the world, lasting nearly a hundred years. The battle also allowed Britain to assert itself globally like never before, leading to a drastic expansion of the British Empire as Britain became the global hegemon, taking up the “global policeman” role America has today. Through this domination as the world became a smaller place, the global system of today was sculpted by British politicians and colonial administrators to suit British interests. Understandably, there is a lot of British history tied to this battle and the wider campaign, and British core interests were clearly at stake. The Waterloo Campaign was worth fighting with the benefit of hindsight.

Even in the era of mass democracy, the end of a war can be dramatically celebrated and remembered – cast your minds to the Falklands War and the Gulf War. These were two examples of a classic state-on-state confrontation where interests were directly threatened. The former involved the invasion of sovereign British territory and the latter the invasion of a major oil-producing country and the threatened invasion of another. Both were relatively swift successes with minimal losses which compelled enemy surrender and their armies were pushed from physical locations. Compare that to the Iraq War – Coalition countries entered the War on false pretences, achieved a swift conventional victory, were not prepared for reconstruction and insurgency, and sectarian civil war ensued and, years later, when the insurgents were defeated and Coalition forces pulled out, the country descended back into sectarian chaos. Exasperated, we throw our hands up in the air and ask “what was it all for?” It is not hard to understand why there is a war-weariness among many in countries like America and Britain.

The Criteria for ‘Good War’

There is no “correct” way to remember a war, but the criteria above generally indicates how a war will be remembered based on its outcome, how invested the people are in it and how important it is to the states history. When a war is remembered in positive terms, two criteria would have been met – the war was both necessary and a clear success, and losses and hardship were kept to a minimum. In today’s world, both are in short supply (especially the former). If it is remembered in negative terms or, more commonly, swept under the rug, the opposite was the case – war was ambiguous in terms of need and success, while losses were heavy and hardship was plentiful.

When a war is celebrated as it comes to a close and remembered in largely positive terms when years pass, it is clear that the war was fought well and for the right reasons. In today’s world, there is a clear absence of this. There is nothing stopping future conflicts in America, Britain and the West being remembered in such a way, but it is clear that future wars must be chosen more carefully than those of the recent past and must be fought better at the strategic level. Until then, we will continue to quietly sweep conflicts under the rug once they peter out.

[Photo: Flickr CC: Caption: Charge of the Scots Greys at the Battle of Waterloo]

Heres How We Should Think about Intervention