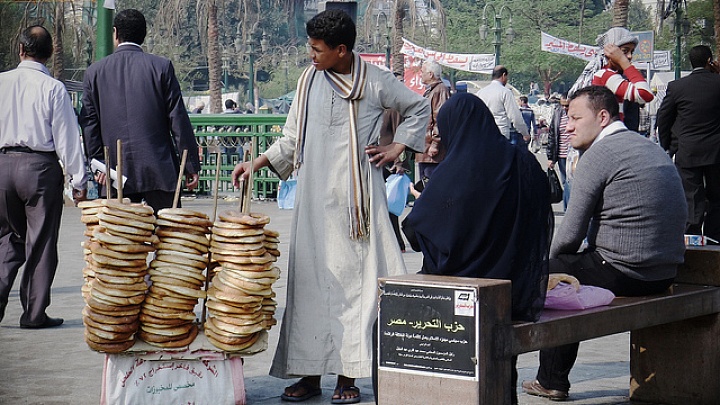 In your new book, Once Upon a Revolution, you tell a well-known story from a previously unexplored perspective—that of the revolutionaries themselves, before, during, and after Tahrir Square. Why did you choose that approach?

I wanted to follow the progress of the idealistic project at the heart of the January 25 Revolution: the quest to develop new politics, new ideas, and new, more accountable forms of power. There was a comparatively small group of people who were determined from the start of the uprising to build an enduring political project. I sought out and followed members of this core group as they embarked on what was always a quixotic experiment. Against them were arrayed all the status quo powers—the state, the bureaucracy, the military, the police, the old regime cronies—as well as other regressive but organized forces, like the Muslim Brotherhood. Their story was inherently personal: the unfolding history of an idea as it played out in the struggles of individuals. I believe this story contains much of the potential for transformative change, a change sadly still unrealized in Egypt. We have witnessed remarkable transformations at the individual level, however, and I expect that many of these activists and thinkers will play a role in Egyptian life and politics for decades to come.

What missed opportunities were there to put Egypt on a better path in the first year after Tahrir Square?

Firstly, it’s important to emphasize that revanchist old regime forces defeated the uprising. A concerted campaign to restore military-authoritarian role won out. Even had the revolutionaries made fewer mistakes, or smarter strategic moves, they might well have been foiled by the machinery assembled by Egypt’s new dictator, Abdel Fattah el-Sisi—who built his comeback on the scaffolding of military intelligence.

I put the missed opportunities of the uprising under three general categories: movement organization, leadership, and ideas. As a movement, the revolutionaries never cohered; they maintained clustered around different affinity groups. The lack of leaders contributed to paralysis. January 25 was a “leaderless revolution,” a condition necessitated by the police state’s relentless destruction of any charismatic personality. Once Mubarak was gone and the transition seemed up for grabs, the revolutionaries embraced, even fetishized, this lack of leadership as if it were a virtue. Finally, the revolution never really went beyond its fundamental appeal to dignity and fairness: “the people want the fall of the regime” and “bread, freedom, social justice” remained its clarion calls long after the slogans had any tabgible significance.

What role did your protagonists, Basem Kamel and Moaz Abdelkarim, play?

Moaz, a free-thinking Muslim Brotherhood youth leader, was expelled from the Islamist movement because of his commitment—despite his personal faith—to a secular state. He brought to the struggle an idealism bordering on naiveté. Like many of his peers, he thought it was enough to agitate for accountability for past regime crimes and a common core of basic political reforms. He never could grasp the need for a simple, compelling political idea around which to rally support. He correctly diagnosed the need for unity between Islamist and secular revolutionaries, but he was ultimately unable to win the trust of secular activists or persuade his old comrades in the Muslim Brotherhood to restrain their thirst for power.

Basem, a secular architect who only became politicized in the year before the 2011 uprising, had a sharp organizational mind. Unlike many others, he realized that a successful reform or revolutionary movement required leaders and a clear platform. He was, however, unable to convince enough of his peers to follow that line of thinking, and in 2013 contributed to the broad swathe of secular dissidents who decided that the return of a military strongman was the only viable response to the authoritarian overreach of Mohamed Morsi.

Reading your book and thinking back on those years, it seems that one of the biggest problems the revolutionaries had was exhaustion—too many just wanted to get back to their normal lives after the initial dramatic victory. Could you comment on that, and discuss how to keep a revolution energized and engaged?

I don’t think lack of commitment was the problem. One of the best thinkers of the revolution—the blogger-strategist Alaa Abdel Fattah—told me during one of his short breaks from prison that the movement needed more people who had lives beyond the revolutionary activism. A person who works in Egypt has a much better sense of how to try to fix Egypt.

The regime’s tactics successfully exhausted the dissident community, keeping them off balance and constantly distracted by short-term battles. Beginning in April 2011, the military would periodically assault and detain activists, torturing some, holding others without charge, and referring still more to military courts, which practiced a parody of the rule of law. One consequence was that the core group of activists was forever being pulled away from their central mission—changing the balance of power—to fight for the liberty of their detained comrades.

When Sisi took power in 2013, many people were ideologically exhausted. They had given up hope that they could beat the military-dominated power complex. Many surrendered to the regime propaganda which presented reform or revolution as “chaos” and the restoration of unaccountable military rule as “stability.”

Sisi’s grip on power, however brutal and effective for now, is tenuous. He doesn’t control the vast apparatus that is currently consolidating his rule.

Why has the Egyptian military traditionally commanded such immense respect and trust?

The Free Officers established the Egyptian Republic in 1952, eliminating the monarchy and the hold of colonial powers over Egypt. The army produced Gamal Abdel Nasser, the father or Arab nationalism and the proud progenitor of genuinely popular principles of popular sovereignty, modernization and economic self-sufficience. The military successfully defined itself as synonymous with the state: creator of a new reality and custodian of its identity. Furthermore, almost the entire male population serves in the conscript military, and Egyptians feel a strong pride and affinity for the institution. For all its faults (and the military is far more corrupt and less competent than is widely believed in Egypt), the military has been one of Egypt’s most successful institutions. The military has also been savvy at managing its own image as above the partisan fray, even if it has produced four of the last five presidents and has cornered a dominant economic monopoly for itself. The military has branded itself as impartial guardian of all things Egypt, while the ruling party and the police have been tarnished as self-seeking and abusive.

Was the United States helpful, harmful, or neutral in its approach to Egypt after the 2011 revolution? Did U.S. officials ever interact with street-level figures like Moaz and Basem?

Ultimately, America didn’t determine the outcome, but to the extent that it had influence, Washington exercised it poorly. It dallied during the original uprising, hedging its bets, only backing the revolt when Mubarak’s position already had become untenable. In the first year of the transition, the US was reactive and confused. It emphasized elections rather than a sound transition, and failed to exercise any leverage over the military, which had taken over direct, dictatorial rule from Mubarak. US officials tried once to meet with youth leaders, but those leaders refused because they didn’t want to be tainted as American pawns. As a result, some fringe activists met with Hilary Clinton, who was Secretary of State at the time; Clinton came away aptly unimpressed, but also, probably unaware that the people she had met were not leaders of the revolution.

Embarrassingly, US officials were defending Morsi as a paragon of democracy long after he had lost legitimacy as a result of his capricious and authoritarian rule. In the end, the US effectively supported the military and its coup, while doing so in a manner that enraged the military and left its leaders feeling disrespected. I’d say US policy was a net loss for American interests and for the good of Egypt itself.

In his introduction to Egyptian society and in his election campaign, Abel Fattah el-Sisi deliberately cast himself as a second Nasser. Now that he’s been in power a while, does the comparison hold true? Or is he more in the mold of Mubarak?

Nasser’s reality is much bleaker than his image. Sisi is hearkening to the image of Nasser the great liberator of Egypt and the proud Arab nationalist, beloved throughout the Arab world for his charisma, intelligence, charm and wit. But Nasser ran a repressive dictatorship and built many of the institutions and practices that ruined Egypt. He erased political life and habitually imprisoned dissenters. He put in place a military oligarchy that was obsessed with perpetuating itself. He led Egypt to military catastrophe in the 1967 war. His regime lasted, but at the expense of Egypt’s well-being. I think that Sisi is likely to follow much of that pattern.

Have you been back to Egypt recently? What is the political atmosphere there now?

The last time I went to Egypt was in January of this year. It felt buttoned down; the Sisi regime has imprisoned more people for political crimes than all its predecessors combined. Dissenters of all stripes have been detained, tortured, killed, or exiled. Some brave revolutionary activists have found ways to continue, but even academics, lawyers, and others who were left alone in Mubarak’s time are being heavily persecuted today. The aim is to silence all dissent. It can’t work over the long term, but it could work for many, many years, unfortunately. I’m not sure how much longer they’ll let journalists and researchers—people like me—even enter the country.

Do you think Egyptian society has the capacity and resources to surprise us again? To put it another way, how long can President el-Sisi’s rule last?

Absolutely, Egypt is in for another round of surprises. Sisi doesn’t control the vast apparatus that is currently consolidating his rule. Runaway judges and torture-happy police are working today on Sisi’s behalf, but the evidence suggests a Balkanized state with each fiefdom, the military included, working for its own benefit. That means Sisi’s grip on power, however brutal and effective for now, is tenuous. He has clearly failed the political test; he has stripped away the rights and protections for which so many Egyptians fought. There is no rule of law or freedom of dissent left. In the long run, he will also fail the economic test; his recipe for bringing prosperity, or at least staving off collapse, is a reliance on cash from his backers among the reactionary Gulf monarchies. That is not a sustainable recipe for keeping Egypt afloat. Lack of freedom and prosperity, in combination, will certainly lead to another uprising, but if the political forces of dissent don’t learn in the meanwhile how to bridge their gaps, then they will be doomed to suffer a similar fate of fragmentation.

Once Upon A Revolution: An Egyptian Story
by Thanassis Cambanis
Simon & Schuster, 288 pages, $19.26

Thanassis Cambanis is a journalist specializing in the Middle East and American foreign policy, and a fellow at The Century Foundation.

Urban Warfare and Jade Helm: Why We ...