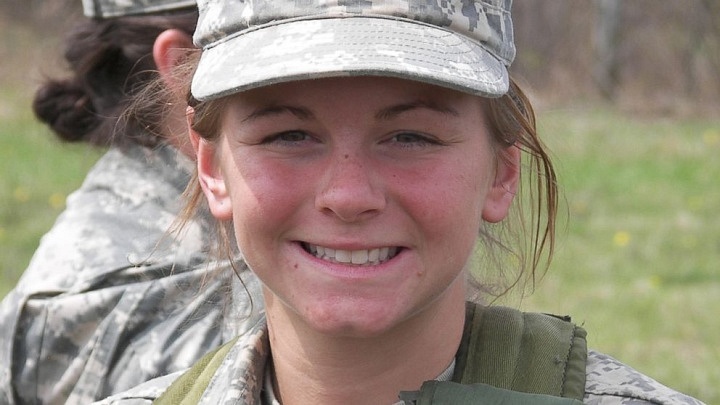 Your book details the death of the first woman to die in an all-women unit called the Cultural Support Team (CST) in Afghanistan, Lieutenant Ashley White Stumpf. Her death went mostly unnoticed in the larger media. Why have women in combat not received much attention, at least not since the days of Jessica Lynch?

I wrote this story because it was the war story we didn’t know. Here was this team of women recruited by special operations in 2011 while the combat ban was in place. Who were they? And why were they recruited? What made them want to be part of this pilot program? It was the friendship and family [I witnessed] that was the motivation to write this book. When you spend time with these women they step on each other’s stories, they know each other’s tales, they tell and finish one another’s jokes. When it comes to a war story, they had the rare distinction of being women recruited, trained and deployed as a team. And I wanted to capture this slice of history.

Did they all get along?

Who are the women you profile in your book, in terms of their backgrounds? I imagine they’re all patriotic, probably in their 20s, athletically built and so forth. But is this is a misconception?

They were all sizes and all backgrounds; a lot of them were track and field stars. They were real cross-fit enthusiasts. The stereotype is that they can only be one thing or the other – they were very serious, very fit, but also very feminine. They had to be able to show in the heat of nighttime operations that they were women.

Tell us about Ashley White.

Ashley was Kent State ROTC, and then a [member of] North Carolina’s National Guard. Her husband, her ROTC sweetheart from Kent State and her biggest champion, was based at Fort Bragg. She was a physical trainer, 24 [years old].

Ashley loved baking and cooking dinner for her husband, but also putting 45 or 50 pounds of weight and road marching for miles and miles. And then she could do 25 or 30 pull-ups from a dead hang. The Rangers would say, “Wow she’s a beast at the gym.” [They also said] she had this smile like a Disney Land greeter]. But she was also someone who could keep up on a night raid and who would spend hours in the gym pushing herself physically and mentally each day. I hope this book shows the three dimensions that she lives in. [These women were] not superheroes but just pushed themselves to the outer limits for the sake of their country.

How did she die?

She died on October 22 2011 alongside two Rangers, SFC Kris Domeij and PFC Christopher Horns, on a nighttime raid;

US Special Forces are known for their exclusionary and uber-male culture. Yet you write that the feminine side of this team was crucial to the CST’s success. Were all the women accepted initially?

I don’t think the stereotype fits here. [This] was a time during the war when everyone was looking for solutions. Nobody could tell you the war [in Afghanistan] was going well.

Of course there was some initial skepticism. There was a different training schedule, a different recruiting cycle. I understand the skepticism of men who’ve had nine or 10 deployments since 9/11 and who all of a sudden are asked to take new folks out with them on these life-and-death missions each night. But women were needed and it was Joint Special Operations Command and the Rangers that had sought these women to join them out there on the battlefield each night. Women could talk to the [local Afghan] women. They could gain understanding, knowledge, information. They could find out if there was a barricaded shooter laying in wait, as one of the soldiers did one night. One member of the team realized there were IEDs all over the neighborhood. Each night they showed the value of being able to talk with half the population that before hand had been largely out of reach.

There’s far more willingness and acceptance that women are contributors to the US military than even 10 years ago.

They were not Rangers but they were right alongside them on these operations, going in and talking to women and searching their quarters and keeping them removed from the operation.

In 2013, the US ban against women in combat roles was lifted. Women were previously mostly medics and drivers. Why did it take so long for the US Army to integrate its special forces?

Many Rangers I spoke with said these teams should have existed years ago. Men could not do [a lot of things] in a conservative and traditional society. [These women] brought value to the mission by helping find things and the people they were looking for. This had been going on in ones and twos for years, but had never been formally recruited, trained and deployed as a team.

How do you think this will change future wars, or counterinsurgencies?

Like what [Martin] Dempsey and [former Defense Secretary Leon] Panetta said: This is regulation catching up tot the reality. This was war. It demanded to have the best people you could fighting. All kinds of women landed in unconventional roles that were, officially, off limits to women. The next frontier is whether women will be allowed to become SEALs and Rangers.

I want readers to decide that. [This book was] not created to have a discussion of my personal views. It’s really about purpose and not about politics; there was a June 2013 press conference with Special Ops Command about integration and they cited Ashley and her teammates, saying they did a tremendous job physically and they “may well have laid foundation for ultimate integration.” There’s far more willingness and acceptance that women are contributors to the US military than even 10 years ago.

Is this something unique to conservative societies like Afghanistan? Or will this emerge as a new norm – embedding elite units of women soldiers along special forces?

I tend to think this is a new norm given the rise of nonstate actors, from my perspective, and looking at fragile states. But I wanted this book to be a story about what a group of soldiers are doing and have done, not a story about what they should do or could do or are capable of doing.

You discuss the military problem of incentives – that is, that strength has been prized over knowledge. Eric Olsen, who founded the CSTs, came in and tried to mix things up, believingAmerica was never going to kill its way to victory in Afghanistan. This appears to mirror the larger COIN debate over the past decade – whether we’ve gone too far away from killing bad guys and toward winning hearts and minds and so forth. Based on your reporting, and own views, where do you fall on this debate?

I will have to say that having spent lots of time in Afghanistan that I agree with Olsen. There is no shortage of tested military leaders who would say that. I don’t think you can kill your way to an end in these conflicts. One of the things so important in this story is the role of Afghan military and interpreters. There are heroes of all kinds we don’t talk about who risk their lives for others on a daily basis. My concern is: where does it end? Do you have enough knowledge to be empowering people and [helping to create the conditions for] long term stability.

Reading the comments section of some of the reviews of your book posted, we see some pretty inflamed voices, especially from combat veterans. One veteran, a male, writes that he is “deeply saddened to hear of the useless waste of another incredibly valuable individual such as 1st Lt Ashley White-Stumpf. Its a black day when, to prove women are of equal value with men, we require the sacrifice of Lt White-Stumpf.” How do you respond to critics like him?

All change is difficult; I have reader mail that by a 6-to-1 ratio is men saying how much they enjoyed this story. I have army officers and dads write me who knew women were out there but didn’t know the full story. It is men who have been most vocal in writing to me to say thank you for finding a way to share this story.

Stepping further back, are we turning a corner in Afghanistan? How would you assess its new president?

I think Afghanistan has a shot at a brighter future. I see so many young people fighting for their country’s future and so I do think it is not a place that is devoid of hope. But it is hard because there is a hardened narrative [here in the U.S.] that Afghanistan is a disaster.

What’s your next book about?

I have one or two ideas. Remember I started reporting on this two years ago. It’s been a sprint. People shared with me some of the most heartbreaking, the funniest and the most moving and intimate moments of their lives. And I want to put this book out in the world in a way that is true to that trust. So once I do that and can rest for a few days I’ll think about it and get back to you!

Ashleys War: The Untold Story of a Team of Women Soldiers on the Special Ops Battlefield
by Gayle Tzemach Lemmon
Harper, 320 pages, $16.19

Gayle Tzemach Lemmon is a senior fellow at the Council on Foreign Relations and the author of The Dressmaker of Khair Khana (HarperCollins).

Want to Save the Defense Budget? Kick ...