American Witnesses of the Nazi Rise to Power 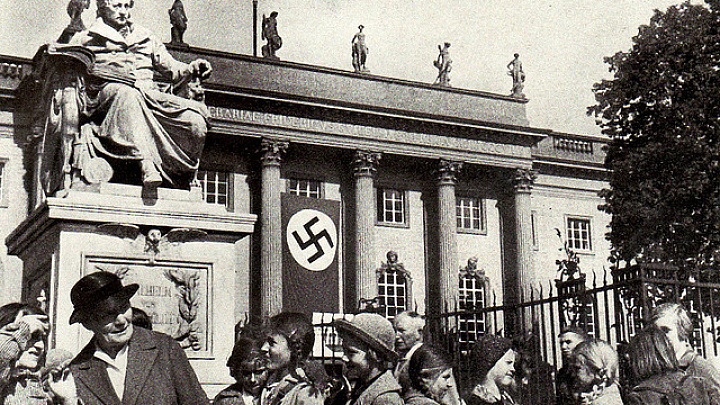 Your book Hitlerland chronicles the lives of Americans who witnessed first-hand the Nazis rise to power. What drew the Americans you write about to Berlin?

Berlin in the 1920s was a wild place, where everything about life played out on the extremes. Even the sex was wild, as normal inhibitions all but evaporated. Given Germany’s defeat in World War I, its economic collapse and hyperinflation, radical political groups of all stripes were very active and often turned to violence. At the same time, Berlin—more so than Paris or London—was the cultural capital of Europe, boasting celebrities like Bertolt Brecht, Marlene Dietrich and Albert Einstein. The Americans who came to Berlin were swept up in all this excitement.

You write that most American reporters got what was going on with Hitler long before the American public or leadership did. Why was this the case?

The most common mistake was to underestimate Hitler. Americans often saw him as almost a clownish or effeminate figure, who couldn’t possibly outmaneuver the more “serious” politicians. In November 1931, Dorothy Thompson, one of the most famous correspondents, interviewed Hitler and quickly proclaimed that he had no chance of gaining power. Hitler took power in January 1933.

But those correspondents who observed him early on, as far back as 1922 when he was just emerging as a political figure, were struck by how skillfully he played his audiences, tapping into their sense of humiliation after Germany’s defeat and their panic because of the economic disarray. They were also struck by how frightening his rhetoric was about the need to destroy everyone he branded as Germany’s enemies, starting with the Jews. Those reporters began to sound the alarm early.

But why did it take so long to sink in with their readers back in the United States?

Many Americans were convinced that their sacrifices in World War I had not served any useful purpose, and the last thing they wanted was to fight in another European conflict. They were also soon preoccupied with Wall Street’s collapse and the Great Depression. Finally, there was the instinct to dismiss much of Hitler’s rhetoric as “playing to the base,” to put it in today’s terms. The assumption was that he couldn’t possibly mean to act on his threats.

Of all of your stories about Americans in your book, whats the biggest surprise?

For many readers, I think it’ll be discovering that an American woman, the wife of Hitler’s propagandist who was of mixed German-American parentage and a Harvard grad, may have prevented the Nazi leader from committing suicide after his failed Beer Hall Putsch in 1923. The woman’s name was Helen Hanfstaengl, and Hitler clearly—how to put it?—had a thing for her in his own awkward way. This is a story I tell in some detail.

There was the instinct among Americans to dismiss much of Hitler’s rhetoric as “playing to the base,” to put it in today’s terms. The assumption was that he couldn’t possibly mean to act on his threats.

How does your view of U.S. Ambassador William Dodd and his infamous daughter Martha differ from that of Eric Larson, whose book In the Garden of the Beasts focuses on them?

Like Larson, I believe that Dodd was a fundamentally decent man who came to despise the Nazis. That speaks well of him. But he was also singularly ineffective as a diplomat, which Larson may dispute. But our real difference is in our evaluations of Martha. We both write about the fact that she had affairs with everyone from Nazis to Communists. But, in the end, Larson concludes that she was a woman of principle because she turned against Hitler and the Nazis; I completely disagree.

It’s not her sexual antics that led me to that conclusion. She was first an apologist for Hitler and then a spy for Stalin. She even told the Kremlin that she could gain access to her father’s confidential correspondence with Washington—in other words, that she was willing to spy on him. Of course the ambassador had no idea what she was up to. That crosses every line as far as I’m concerned.

I know you are of Polish descent and worked extensively as a journalist in the region. But why did you decide to write this book in the first place?

I lived in Germany twice as a Newsweek correspondent, but I never had really thought much about what it must have been like to have been, in effect, one of my predecessors. There have been many excellent accounts of this period, but what is different about mine is the fact that the reader sees events unfolding through the eyes of the Americans there at the time. They didn’t have the benefit of hindsight; they were trying to figure out what Hitler and his movement represented at the time.

The implicit questions for anyone, including myself as I was conveying their stories, were: What would I have understood at the time, and what would I have done? I think most people will realize that the answers are not nearly as obvious as they might have thought before reading Hitlerland.

I recently spoke with a prominent Russian reporter whose own early work on Putins Russia feels eerily reminiscent of those reporters who reported on pre-Holocaust Nazi Germany, obviously not trying to equate the two but only to say there are some parallels. Do you think there are lessons to learn from this episode in history?

As you say, you have to be careful about making direct historical analogies. No two situations are exactly alike. But one lesson I would draw: if a leader of a radical movement or a country vows to do things that sound too outlandish to ever happen, the world should take him seriously. Just because most of us make rational calculations and believe in certain moral boundaries doesn’t mean that such people do. It’s better to err on the side of caution, preparing for the worst, than to indulge in wishful thinking that can make catastrophic results more likely.

Even recently it was reported that the CIA recruited several Nazis long after the war. Did this revelation surprise you?

No, because the initial postwar efforts to prosecute Nazi war criminals slowed or even stopped in many cases as soon as the Cold War started. The priority became the new struggle with the Soviet Union.

Can you give a preview of what your latest book will focus on?

In fact, I am now working on a book about Nazi hunters and their efforts to bring Nazis to justice from the end of World War II and the Nuremberg trials to the present day. What makes this story so interesting is that it was a relatively small group of people who really kept pushing to bring Nazis to justice, especially after the Cold War started. They were highly dedicated individuals from many countries—the United States, Poland, Israel, France and Germany itself—who would not give up, who would not accept the notion that the Nazis’ crimes could or should be quickly forgotten. But they were also a discordant group, frequently quarreling among themselves. It’s a rich, very human story.

Andrew Nagorski, who was born in Scotland to Polish parents, moved to the United States as an infant and has rarely stopped moving since. An award-winning former Newsweek bureau chief in Bonn, Berlin, Moscow, Warsaw, Rome and Hong Kong, he is the author of  The Greatest Battle: Stalin, Hitler, and the Desperate Struggle for Moscow That Changed the Course of World War II(Simon & Schuster).