House of Cards: How King Salmans Reshuffling May Backfire 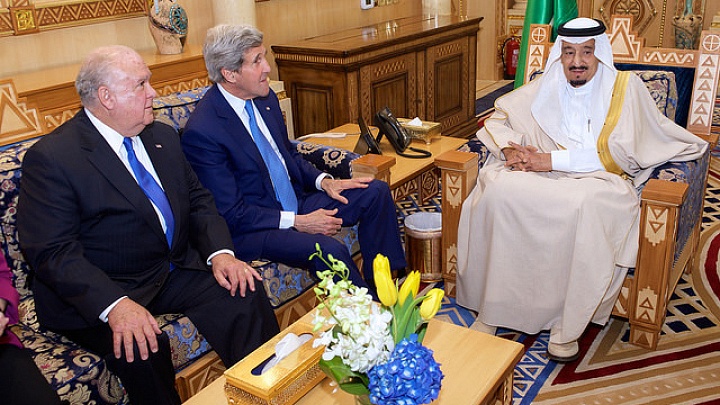 In the midst of a harsh military campaign in Yemen, Saudi King Salman has managed to surprise once again. Before dawn on April 29, he issued a series of royal decrees reshuffling both the Cabinet and the monarchy’s line of succession.

Crown Prince Muqrin was relieved of his duties “on his own request”, his post being assigned to Interior Minister – and the King’s nephew – Prince Mohammed bin Nayef. In turn, King Salman’s favorite son, young Prince Mohammed bin Salman, was appointed Deputy Crown Prince. Thus, three months after ascending to the throne in January, King Salman has strengthened his own power and bloodline, shifting further away from the legacy of his predecessor, King Abdullah, and setting up the transition to the grandsons of the Kingdom’s founder Abdulaziz.

Salman’s move, however, also seems to be a way to seal his foreign policy choices. Mohammed bin Nayef, a conservative and a long-time friend of Washington, has been described by Saudi newspaper al-Sharq al-Awsat as a “fierce chaser of terrorists” because of his role as counter-terrorism czar. He has a strong voice in foreign policy issues, and is considered hawkish on Iran. But he is also responsible for the Kingdom’s brutal suppression of fundamental freedoms.

Mohammed bin Salman, though still in his early thirties, is the current Minister of Defense and the public face of the Saudi war in Yemen – even a sort of “national hero” according to some. In Riyadh, newly erected billboards portray the young Prince and the King, together with Saudi soldiers proudly waving the Kingdom’s flag on the battlefield.

The military intervention in Saudi Arabia’s poverty-stricken neighbor has unleashed a patriotic (and sectarian) fervor at home. Many Saudis consider themselves at war against Iranian expansionism, not only in Yemen, but also in Iraq and Syria. Now that their country has purportedly proven its capabilities in leading a lengthy air campaign, some are even eager to extend it elsewhere.

King Salman has made a striking departure from a past characterized by evolutionary change in the monarchy’s decision-making process.

However, Salman’s policies may be overreaching. Prince Miteb, while excluded from the line of succession, is still in control of the powerful National Guard, the largest military force in Saudi Arabia and the only one not falling under the leadership of the Ministry of Defense. The corps was founded by his father Abdullah, who commanded it from 1962 till 2010. Its core officer ranks were devoted to the late King, and now are loyal to Miteb. The National Guard has been deployed to the Najran Province on the border with Yemen, and may have a say in the conflict.

Besides Miteb, there are plenty of princes that are being excluded from power by Salman’s latest decisions. According to Saudi sources, many of them are unhappy. And, in fact, an official communiqué stated that the royal decrees were supported “by the vast majority of members of Allegiance Pledge Commission”, but not by its entirety.

Moreover, the unexpected pronouncement by which Salman removed Crown Prince Muqrin implies that a similar scenario could happen again in the future to the detriment of the King’s son. Mohammed bin Salman is ambitious but young and inexperienced. He may soon come under criticism when it becomes clear, even in Riyadh, that the much touted military intervention in Yemen is at an impasse. The airstrikes have brought more death and destruction to an already troubled country, but almost nothing has changed on the ground. The so-called Houthi movement (also known as Ansar Allah) is still in control of the capital Sanaa and the northern part of the country. And, even in the south, Riyadh has not succeeded in stabilizing the situation enough to allow Yemeni President Abed Rabbo Mansour Hadi to return to Aden.

Meanwhile, the Saudi airstrikes, together with an air and naval blockade, are provoking a humanitarian catastrophe of immense proportions in Yemen. The military operation, initially dubbed “Decisive Storm”, has even been rebranded “Restoring Hope”, with a new purported focus on political engagement and humanitarian relief. However, this soon turned out to be a mere propagandistic move, as the bombing campaign did not stop and the unprecedented blockade has been maintained.

The botched Saudi intervention may backfire on the Kingdom in many ways. With over 24 million inhabitants, Yemen is the most populous country on the Arabian Peninsula (Saudi Arabia’s population stood at 30.8 million at the end of 2014, but 33 percent of them – over 10 million – are foreigners).

Many Saudis are of Yemeni origin, and hundreds of thousands of Yemeni expatriates work in the Kingdom. Yemen’s sinking into chaos will inevitably affect its northern neighbor. The Saudi air campaign has already strengthened Al-Qaeda in the Arabian Peninsula (AQAP), also known as Ansar al-Sharia. The group, allied with local Sunni tribes, has taken control of large parts of Hadramawt province.

Prince Mohammed bin Nayef narrowly escaped an assassination attempt by a Yemen-based AQAP operative in August 2009. One year ago, the group staged a cross-border raid into the Saudi town of Sharura, and in the future it may find again its way inside the Kingdom. Jihadist ideologies are still widespread in Saudi Arabia. Hundreds of Saudis are fighting in Iraq and Syria, many of them in the ranks of ISIS (the so-called Islamic State), despite several countermeasures taken by the government. And according to some estimates, there are more Twitter accounts created by ISIS supporters in the Kingdom than anywhere else in the world.

Recently, Saudi authorities announced that they have arrested 93 suspects with ties to the Islamic State (ISIS) since December, including a cell that was planning attacks on the U.S. Embassy. In November 2014, militants tied to ISIS managed to kill and injure several people in the largely Shiite Eastern Province, affecting the dangerous sectarian faultline inside the country.

The Saudi air campaign against the Shiite Houthi movement in Yemen has sectarian overtones. It has been accompanied by heated sermons delivered by Salafist sheikhs in the Kingdom. In the early days of the campaign, Mohammed al-Arefe, a cleric with millions of Twitter followers, lashed out at the Shia and Iran in a sermon viewed over 200,000 times on YouTube.

According to some analysts, thanks to its military operation in Yemen, the Saudi monarchy is winning some support from those who once considered the Islamic State a necessary instrument to confront Shiite and Iranian extremism in the region. However, Saudi interventionism is not only stoking sectarian tensions across the Middle East, but also risking new fissures inside the Kingdom.

Members of the local Shiite minority, representing about 10-15 percent of the Saudi population, complain of systematic discrimination. Many of them are convinced that the air campaign in Yemen has fueled a rise in sectarianism within the country. The early days of April have been particularly tense in the Eastern Province. Government forces clashed with locals, during security raids that – according to residents – were aimed at quelling calls for protests against military intervention in Yemen.

With his unexpected moves, King Salman has marked a striking departure from a past characterized by evolutionary change in the monarchy’s decision-making process. Amid rumors that his choices are heavily influenced by both Mohammed bin Salman and Mohammed bin Nayef, the King has also ordered the merger of the Royal Court with that of the Crown Prince (once again at the suggestion of bin Nayef).

Saudi Aramco, the world’s biggest oil company, is being restructured, and its new 10-member Supreme Council will be headed by young Mohammed bin Salman, who is also Deputy Crown Prince, Minister of Defense, President of the Council of Economic and Development Affairs, and Special Adviser to the King. And Prince Abdulaziz bin Salman, another son of the monarch, may soon be appointed to replace 79-year-old Ali al-Naimi, who has been Oil Minister since 1995.

In every respect, King Salman’s recent decrees represent a consolidation of power by the Sudairi clan of the royal family, to which both he and Mohammed bin Nayef belong. Right now, almost every major position in the Cabinet is held by either a Sudairi or a loyal – albeit qualified – technocrat. But this powerful clan should also ensure that the excluded branches of the royal family are still bent on preserving the regime. Meanwhile, Salman and his favored son have assumed full responsibility for the Yemeni war. But none of the two seem to have a clear exit strategy from the conflict.

With the concentration of power on the one hand, and the adoption of risky regional policies on the other, neither bodes well for the future of the Kingdom. Internal divisions and ideological cleavages in Saudi society hinder popular mobilization and real political change in the country in the short term, but do not prevent the possible rise of domestic terrorism and sectarian turmoil. The Saudi monarchy sees itself in an existential battle against Iran and ISIS both at home and abroad. It feels encircled by festering conflicts and looming threats. However, its unprecedented interventionism and puzzling rashness risk getting it into more trouble.

This is a scary prospect, not just for Saudi Arabia but for the entire Middle East.

Fixing Military Intelligence Gathering, but of the ...