What 1914 Teaches Us About Naval Warfare Today 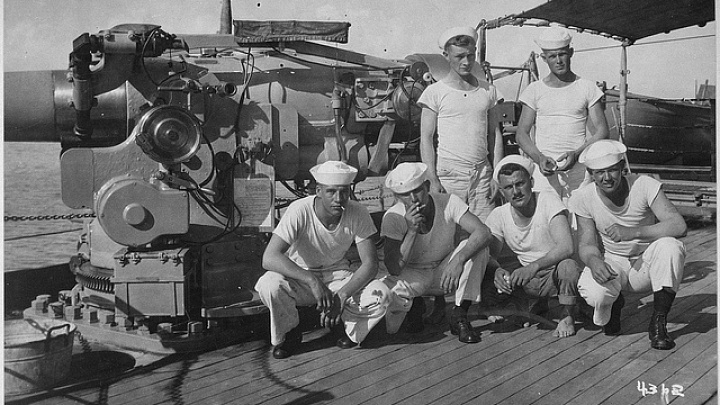 When we think about World War I, or “the Great War,”  we think about Flanders’ Fields, doughboys, the trenches, and the immense human tragedy of that now century-old cataclysm. What we often forget, though we call it a World War, is that the conflict also involved  combat on the oceans of the world on a scale, scope, and intensity not seen since the French Revolution and Napoleonic Wars. Even less firm in our memory are those developments in naval warfare, technology, tactics, and strategy that contributed to the context and contingency of the European security environment that fractured into a World War in 1914. Policymakers and military planners behind the U.S.s maritime pivot to Asia would be wise to revisit the archives and reexamine the naval warfare practiced by major powers in the years leading up to World War I.

The coming of the Great War was due to sea power. Not entirely, of course, but the global character of the war came from Great Britain’s involvement; that involvement can be traced directly to sea power—Belgian neutrality being merely the catalyst for British entry into the war. This was less a result of the naval arms race than it was a complete reordering of strategic priorities due to a variety of factors, but primarily the actions of Jacky Fisher and the intemperance of Tirpitz and the Kaiser.

One might argue that the most revolutionary changes in naval warfare—with  the significant exception of the aircraft carrier—had already emerged prior the outbreak of war in August 1914. What  Holger Herwig calls the “battlefleet revolution” had already taken place before the first “guns of August” ever discharged their deadly consequences. That revolution is fairly well-known, but misunderstood just the same. It was the outgrowth of a naval martial spirit that gripped all the major powers during the first great period of globalization lasting from the 1850s to 1914 and the self-immolation of the Western world system.

Sea power is again front and center on the stage of geopolitical history.

An international cast of navalistsA.T. Mahan, Henry Luce, Alfred Tirpitz, S.O. Makarov, Gombei Yamamoto, Sir Julian Corbett, and their political allies (Kaiser, T. Roosevelt, Tsar, Churchill, Asquith) all believed naval power immensely more important as the world moved to a predominately global maritime network of moving bulk goods in steam-powered ships. Sir John Jacky Fisher had the means and the vision to act on the trends and to address the challenges abroad as well as those closer to home.  The components of his revolution included strategy, professional naval education, re-organization, and  leveraging technology toward what the some in the  U.S. defense community have called a future force.

The strategy component involved a massive realignment of fleet stations.  This involved something along the lines of the U.S. “rebalancing” that is taking place today in the Pacific, except on a far more massive scale.   Such a rebalance encompassed (and today encompasses) a nation matching its naval ends, ways and means against strategic realities.  For Great Britain, Fisher’s “rebalancing” recognized the clear threat posed by the German High Seas Fleet (and Russia to a certain degree) in European waters.  Accordingly British battleship squadrons were brought home from the Caribbean and Far East while at the same time the Anglo-French naval entente ascribed the chief role of sea power in British interests in the Mediterranean to the French fleet. The reorganizational component included a massive reduction in older, what we would call legacy, warship capacity in order to pay for more modern platforms.  Fisher realized that having a too large fleet, composed of odd ball gunboats and outdated steam ships, created a huge operational budget that could be slashed to pay for modernization.  These sorts of fiscal realities were chief among Fisher’s goals and he was ruthless in his decommissioning of outdated vessels.  The rest of the globe could be policed, to some extent, by the United States, Japanese, and French navies.

The education piece involved a recognition that naval warfare, like land warfare, required professional military education in a war college and the valuation of operational and strategic planning.  To this end Fisher established the Royal Naval College at Dartmouth and implemented “revolutionary” personnel policies that gave engineering officers equality with those in the line.  He also broadened the requirement for war college education to include Royal Marines.  Finally, he hired Julian Corbett, the naval historian and theorist to educate a new generation of officers for a new century of maritime challenge.

As for technology,  Fisher’s future force would consist of a close-in sea denial sea control force in and around Great Britain to perform job oneprotect the British isles from invasions and to protect the import and export of seaborne trade.   These two jobs—missions, we would call them—formed  the sinews for any major conflict with a maritime component involving Great Britain. He wished to use an entirely new weapons system, the battle cruiser, to provide for distant defense of the sea lines of communication (SLOCs) of the empire. His bridge to the future was the dreadnought battleship, which was designed primarily to demonstrate the technology for his battle cruiser idea. But the dreadnought promptly assumed a life of its own and gobbled up naval budgets. A.T. Mahan observed as much, and the consequences of “inducing, in the navy as in the public, a simple trust in bigness, and, what is worse, an absence of trust in anything but bigness”  in a famous article in Proceedings for which he was ridiculed in 1906, just a year after dreadnoughts appearance.

The real story from 1890 to 1912 is the relationship between Germany and Great Britain, not the naval arms race, but its second order consequence of strengthening over time Britain’s inclination to decide against Germany in some future major power crisis.  It has been argued elsewhere that the 1912 Franco-British naval agreement already committed Britain to France, Belgium’s violation or not. Churchill and Fisher, First Lord of the Admiralty and First Sea Lord, respectively, were both primed to support the naval initial conditions already in place, as was their battle fleet commander Admiral John Jellicoe. When the crisis finally arrived, the naval component of the military-diplomatic deus ex machina was ready to hand, Churchill having decided to keep the fleet together after its summer training cruise on his own initiative as the crisis built in July 1914.

Sea power is again front and center on the stage of geopolitical history.  The recent launching of the first British aircraft carrier in over half a century, the excessive maritime claims of Beijing in the South China Sea (against the protests of Vietnam and the Philippines), and not least the rather ham-handed attempts by the United States to “rebalance” to the maritime region of the Pacific, and most recently Japanese and North Korean actions in maritime environment surrounding the launch of Korean missiles in the Sea Japan; all these events reflect an international political scene alive with the potential for maritime confrontation and misperception. Statesmen, admirals, and strategists alike would all do well to consult the situation one hundred years ago to inform their efforts, actions, and public pronouncements (to say nothing of those behind the scenes).  In our own day we might conclude the similarities of the United States as Great Britain and China as either Germany, or the as the early 20th century United States (or Russia) seems frighteningly similar. Such a scenario, though, is one worth considering, only inasmuch as we should bend our efforts to avoid it.

[Photo: On board an American destroyer. A five-inch gun and its crew. Central News Photo Service., ca. 1918]