Urban Warfare and Jade Helm: Why We Should Invade Texas 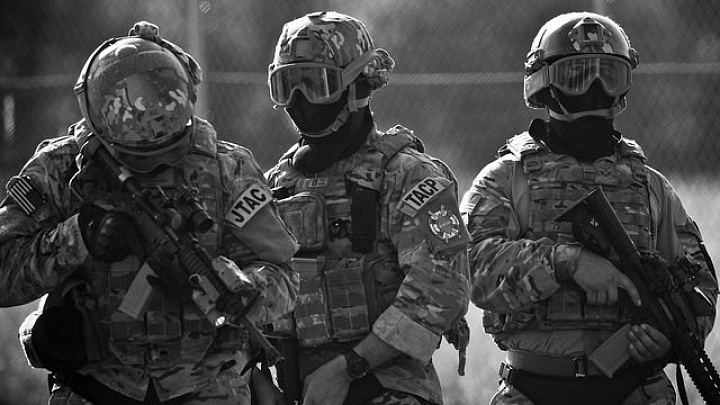 I grew up watching The Simpsons and it remains one of my favorite TV shows. So when news stories began to gain traction a month ago regarding theories that a military takeover of Texas was imminent, I was reminded of this quote (from 1994, no less) by fictional news anchor Kent Brockman: “Just miles from your doorstep, hundreds of men are given weapons and trained to kill. The government calls it the ‘Army’, but a more alarmist name would be ‘The Kill-Bot Factory.’” More than twenty years later, this quote comically sums-up the nature of the suspicions of and claims from the fringe conspiracy theorists of the far-right in America today. The results of the large U.S. military exercise due to take place in Texas, Utah, Colorado and other states this summer should indeed be of great concern for Americans—but not because of the dire warnings of coming martial law from conspiracy theorists and fringe groups. Instead, it should be of concern to us because of what it means for the future of warfare in the 21stcentury.

Tinfoil Helmets: Growth of the Conspiracy

The idea that the U.S. government will send the Army to invade an unruly state and impose martial law has pervaded much of the Obama presidency. Many on the fringe feel that incremental enlargements in the size of government directly challenge their way of life, with the obvious end goal of these increases (according to the fringe) being a totalitarian government. In the last few months this alarm has become especially acute as tenuous evidence has been pieced together which supposedly confirms these fears. More often than not, faux news and “info-tainment” stories are emerging each day which purport that the U.S. government is planning for martial law in Texas under the guise of military training exercises (or that people certainly believe as much).

Despite only recent national coverage, the news that the U.S. military is planning a massive training exercise across southwest American states this summer has actually existed since the end of 2014 – being reported in regional papers as a benefit to the local economy as troops spend their pay there. This rhetoric only altered in March 2015 when a conspiracy ”news” website released leaked information on the training exercise – Jade Helm 15. Especially of interest to these and other conspiracy theorists was a map of the location in which the training will take place. While some states were labeled as “permissive” (such as Colorado), states including Utah and Texas, as well as the southern tip of California, were labeled as “hostile.” Since then, this highly circumstantial evidence has been tied to together with speculation regarding the recent closure of several Wal-Marts in the region. According to theorists, these empty Wal-Marts may become detention centers for political dissidents when martial law is imposed, or even locations to stockpile supplies for Chinese troops who will disarm Americans once they arrive.

By the end of March, the story was exposed to a wider audience after being reported by Texan conspiracy theorist and radio show host Alex Jones (who gained national fame for his 2013 debate with Piers Morgan). As this pressure mounted from fringe conspiracists in late April, the Governor of Texas, Greg Abbott, ordered the Texas State Guard to watch over the Special Forces taking part in the training exercise to ensure “that Texans know their safety, constitutional rights, private property rights and civil liberties will not be infringed.” Perhaps the greatest irony of this situation is that just weeks after the Jade Helm 15 conspiracy reached fever pitch, Governor Abbott has turned to President Obama and the federal government for relief following unprecedented flooding in Texas. It turns out Texas will indeed be invaded—by FEMA relief workers instead of U.S. Special Forces.

The exercise is meant “to improve the Special Operations Forces’ Unconventional Warfare capability” through blending into and operating within alien urban areas without being detected. Far from a declaration of martial law.

Even though the absurdity of the idea has worn off, the story itself seemingly refuses to die as it feeds into the suspicion of the Obama administration (and the federal government in general) popular with much of the far right-wing. The map and the Wal-Mart closures merely offer a small amount of circumstantial credibility to the story, allowing the story to be newsworthy for the least scrupulous of news editors. As one conspiracy website noted, even if the circumstantial evidence and speculation are explained away, “why would the United States government conduct a massive military operation in populated civilian areas during a time when distrust of the United States government was at a historic high?”

What Should Concern Us Instead

To explain this question we must return to the leaked document on Jade Helm 15. The operation will run from 15th July to the 15th September, predominantly in Texas, and will include Special Forces from across the military, as well as some standard military units. Ironically, Texas was chosen in part “because Texans are historically supportive of efforts to prepare our soldiers, airmen, marines and sailors to fight the enemies of the United States.” But vast areas of undeveloped land with access to towns are also requirements which Texas has an abundance of. In essence, the exercise is meant “to improve the Special Operations Forces’ Unconventional Warfare capability” through blending into and operating within alien urban areas without being detected. Indeed, the tagline of Jade Helm 15 is “Master the Human Domain.”

A scary thought, yes. But the idea is not to take over Texas. What is scary is the idea that U.S. Special Forces will have to operate far behind enemy lines, disguising themselves as they move about and operate in a hostile urban environment, hoping that their presence isn’t detected and reported to the authorities. As I’ve written about previously, military operations on urban terrain will likely be a defining characteristic of warfare in this century as the world continues to urbanize. That Jade Helm 15 may become a constant reality in some distant land is indeed worrisome, but it is a positive step that U.S. forces are training for it now.

Since the early 1990s, American officials have been concerned that U.S. troops are simply not trained to operate effectively in urban environments. This began following the Black Hawk Down incident in 1993, but even on the eve of the invasion of Iraq in 2003, concerns were raised regarding the difficulty of taking Baghdad, with some fearful that the Republican Guard could turn the capital into a “Mesopotamian Stalingrad.” While the Thunder Runs into downtown Baghdad did successfully capture the Iraqi capital, this was more down to the effects of speed and mass firepower on a collapsing enemy rather than a coherent strategy to take a major city from an entrenched and resolute enemy. A year later, Fallujah displayed how the U.S. military was unprepared to fight urban warfare cleanly and effectively, despite the nominal success of the operation.

Physical terrain could be taken in the Fallujah model, but at huge costs in terms of manpower and to the urban environment. But throughout the War, the U.S. military has been improving its urban warfare capabilities and tying them to counterinsurgency operations, such as with “Clear, Hold and Build” which developed following the Battle of Tal Afar in 2006. This process culminated during the surge in 2007 and the extremely well-coordinated Battle of Sadr City in 2008. The U.S. military learned lessons in urban warfare the hard way, but it is now teaching those lessons to those who most need it – the Iraqi Army.

Urban instability is an increasingly prominent threat to militaries and it needs to be prepared for through extensive training. This is why U.S. troops conduct MOUT (Military Operations in Urban Terrain) training in realistic town mockups, such as in the 300-acre facility at Fort A.P. Hill. Without such immersive training, U.S. preparedness for urban operations would slip back to the slack levels of preparedness of the 1990s, losing lessons learned in the Iraq War. But even this training facility has come under scrutiny from fringe theorists, with the Commander of the Asymmetric Warfare Group there being confronted on multiple occasions during a phone-in on C-SPAN in May. As with Jade Helm 15, conspiracy theorists asserted that the training at Fort Hill is preparation for taking over American cities and imposing martial law.

The idea that U.S. troops are using training exercises in urban areas as a front in preparation for imposing martial law is convenient for fringes of the far right-wing in America. But Jade Helm 15, as well as training in Fort Hill and numerous other locations, reflects the shifting reality of warfare in a rapidly urbanizing world where America’s military must be prepared for all eventualities. It is the fact that testing operations in urban areas will regularly have to take place in the future which we should be worried about and not the fantasy that President Obama is coming to take people’s guns and declare himself emperor.

Want to Save the Defense Budget? Kick ...