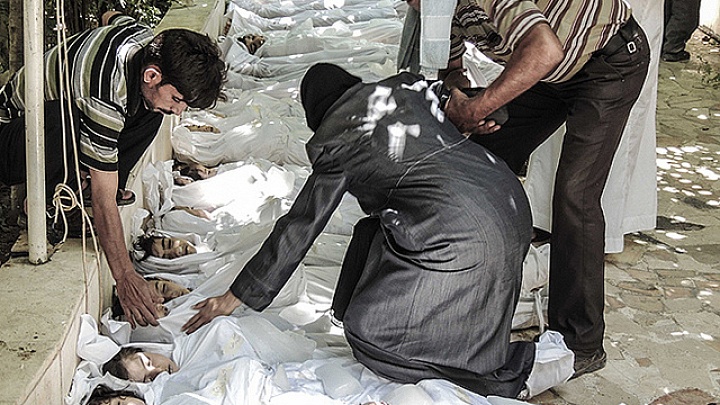 Since the birth of the Chemical Corps back in World War I (then called the Chemical Warfare Service), chemical, biological, radiological, and nuclear (CBRN) officers and noncommissioned officers (NCOs) have lamented the general lack of preparedness in the U.S. military against a chemical weapon attack. In my 20 years of experience, despite the clear threat that CBRN weapons present to America and its forces, the U.S. military has rarely taken training for the possibility of operating on a CBRN battlefield seriously. This can and should change.

Even in the best of times, a chemical officer is exiled to be the night assistant operations officer in the field and is locked in a room full of paperwork in garrison. There is not a chemical officer who has not been levied at least 12 additional duties. CBRN NCOs struggle to track equipment, to train teams to operate it, to perform calibration tests on detection equipment according to schedule, and raise CBRN training tasks from the bottom of the unit’s priority list. SOF units are trained to bury their CBRN protective suits, or “MOPP gear”, along with their parachutes and helmets after jumping into combat. Chemical platoons and companies are tasked with running checkpoints in a new post-9/11 “chemfantry” role.

The acronym “NBC” used to stand for “No Body Cares” and today’s “CBRN” is “Can’t Bother Right Now.” My own experience and that of many others is that anything CBRN-related beyond the most basic individual skills, like putting on a mask in the requisite 9 seconds, is a bit of a struggle outside of the ranks of CBRN specialists. Collective training is even worse. For six years I ran a CBRN training course and routinely had field grade officers and senior NCOs from every branch of service who had not touched a protective mask in years.

The situation is generally even worse outside the U.S. military. My extensive interaction with European militaries in the recent 6 years since becoming a CBRN consultant in Europe has proven to me that the CBRN readiness of most Western states has atrophied to a dangerous and unacceptable degree. For example, the UK’s Army eliminated its Joint CBRN Regiment. I was told by a senior officer in one NATO military service that it only has medium-sized masks, as that’s good enough for everyone and streamlines the supply chain. Take this struggle in active military components and you can multiply it in reserve components.

In reality, chemical weapons, even the most lethal and most persistent agents, are not conceptually any different than sand in the sprockets, hypothermia, malaria, or the risk of trucks driving into each other in the dark of night.

Occasionally there is a panic which for a few months makes CBRN a priority. Saddam Hussein invades Kuwait. A few religious lunatics spread sarin on the Japanese subway. The U.S. claims Iraq has CBRN capabilities. Bashar al-Assad uses sarin in a suburb of Damascus. The pendulum swings. Vast quantities of CBRN materiel are disgorged out of war reserve stockpiles. Training is serious and hard. The unit commander turns up for a game of volleyball in a “MOPP 4” protective suit and faints (Seen it).

Finally, the unloved chemical officer and CBRN NCOs get their time to shine. They work 18-hour days for weeks on end trying to rectify the un-rectifiable and, ending up with a medal for it, lapse back into obscurity and more paperwork after the crisis. The crisis passes without serious incident, apart from heat casualties from wearing MOPP 4 and the occasional wreck because nobody can drive wearing a gas mask. The pendulum swings back to “nobody cares.

The point I make is that the U.S. Army, in my experience, has only rarely and then only in fits and starts, taken the possibility of operating on a CBRN battlefield seriously. The latency of biological warfare agents, combined with generally poor detection until symptoms begin to manifest means that a modern army will not know it has been attacked until hours or days later. It is primarily a medical problem, not a battlefield issue. Let us all hope the world never has to face another nuclear attack. In reality, there is little that can be done at the battlefield level to mitigate the effects of a nuclear weapon.

However, chemical weapons are practically the only weapon on the modern battlefield that a well-trained and well-equipped army can completely negate. Soldiers still die from bullets and fragmentation and bombs. But, following the right procedures, sticking to CBRN training, and use the right equipment, the threat of fatalities within the ranks from chemical warfare agents almost completely disappears.

Protective masks, suits, boots, and gloves are all better than they were even a few years ago. They work. I owe my life and health to themand that was using technology 20 years older than the items in use now. Chemical detection capabilities are great and getting better by the day. Decontamination is more easily accomplished now than in the earlier days of my career. Modern armies have a great deal of technology that was simply unavailable in previous decades, but are still largely saddled by doctrine from a bygone era.

The second element is to re-train and re-label chemical warfare as an operating environment, not as some special, extra-deadly threat or “weapon of mass destruction.” It is not and should never have been treated as one. We should treat chemical attacks like rainfall, cold temperatures, dust, smoke, or darkness: They present a challenging environmental condition, not an unstoppable weapon. Operating in a toxic, contaminated environment is not really different than the operational and logistical demands of a jungle, mountain, desert, or arctic environment. If an army fields good protective equipment to soldiers, the real threat that chemical warfare poses to sophisticated modern military is one of attrition, performance degradation, logistical burden, and the general “friction” that Clausewitz describes. In reality, chemical weapons, even the most lethal and most persistent agents, are not conceptually any different than sand in the sprockets, hypothermia, malaria, or the risk of trucks driving into each other in the dark of night.

Historically, armies lost legions to malaria, food-borne illness, and hypothermia, but modern ones (mostly) don’t lose troops to these anymore because they have invested time and funds into equipment and training. Hypothermia is a far more deadly condition than exposure to sulfur mustard, but can anyone say, “We can’t go there because it’s too cold” and be taken seriously in a defense context?

Being that we can virtually negate the hazards and understanding that chemical warfare is just an operating environment, armies should evolve the functional concept of chemical battalions and brigades. By this, I do not mean a battalion or brigade of Chemical Corps troops. I mean a battalion or brigade of maneuver troops – infantry, armor, and artillery that is trained and equipped specifically for fighting in a chemical environment.

Base a maneuver brigade and its whole slice of support troops at Fort Leonard Wood, Missouri—home of the U.S. Army Chemical Corps. Package it as an elite assignment, possibly even giving incentives to troops who volunteer. Set up an induction course for every incoming soldier, including time functioning in a live nerve agent environment at the Army’s toxic agent training facility. Everyone in an airborne unit has made parachute jumps and every artilleryman has pulled the lanyard, so everyone in the “chemical brigade” needs to have confronted their fears and seen that sarin and VX are not that scary in real life.

Occasionally there is a panic which for a few months makes CBRN a priority. Saddam invades Kuwait. A few religious lunatics spread sarin on the Japanese subway. The U.S. claims Iraq has CBRN capabilities. Assad uses sarin in a Damascus suburb. The pendulum swings.

Individual and collective training will be conducted in full protective equipment as a default condition. Soldiers will talk on the radio, shoot their weapons, and drive their vehicles in varying degrees of protective posture. Every crew will be able to decontaminate its own vehicle or weapon system, with the possible exception of helicopters. Embed all the necessary specialty equipment in the supported units permanently. Make decontamination as routine a task as re-fuelling and re-arming.

Any experienced CBRN officer or NCO will tell you performance of individual and collective tasks performed in protective clothing start out seriously degraded, but get much better with days or weeks of practice. You learn to hold your weapon differently, you learn to throw a grenade differently, you learn where blind spots are when you drive. There is a learning curvebut why not have a gentle learning curve over months in Missouri rather than a very steep and dangerous one in a few days in a combat theater or only every once in a while when a threat develops?

Such a brigade will get CBRN operations out of its ghetto and normalize general and specialty tasks in a chemical environment. Ironically, such a brigade probably requires less specialty CBRN soldiers and a smaller dedicated CBRN component, at least after the initial training period. Why do you need a company CBRN NCO when every NCO is, in effect, a CBRN NCO? Does a battalion assistant S3 need to be a chemical officer? Maybe at first, but probably not later as the concept beds down. The Brigade would not require a separate chemical company because that capability would be integrated organically. Every maintenance platoon and section will do heavy decontamination and every scout platoon will be a CBRN reconnaissance platoon, eliminating the need for separate ones.

There are numerous benefits to having such a unit in the order of battle. First, it creates a battlefield capability able to face any chemical weapons threat—such as that which was allegedly posed by Saddam Hussein or threatened by Bashar al-Assad. The U.S. Army will be possess a maneuver brigade able to operate and conduct military operations without fear of undue casualties or heavy performance degradation.

Second, the mere existence of a hardened maneuver force of combat firepower that is, in effect, immunized against chemical attack would be a tremendous deterrent against use of chemical warfare on the battlefield. The ability to say, “Chemical weaponsso what?” greatly degrades the alleged deterrent effect a chemical arsenal is said to give its owner. This in turn reduces incentive to acquire or use them.

Third, the overall CBRN readiness of an army would improve as soldiers from the “chemical brigade” rotate to other assignments in their career. Hopefully, such soldiers can pollinate a higher level of readiness by spreading the word that, “You know, guys, working in the chemical environment is not that bad.” Finally, this would also be a brigade-sized element that could provide large amounts of general CBRN support to civil authorities at the federal, state, and local level in a domestic emergency involving CBRN attacks, terrorism, or an accidental release of hazardous materials, improving the nation’s CBRN readiness as a whole.

By taking CBRN training seriously, treating chemical warfare as an operating environment and not a WMD bogeyman, and creating a dedicated CBRN maneuver element, a modern army can further relegate the threat of chemical warfare to the dust bin of history.

Dan Kaszeta has over 20 years of diverse experience in the defense and security sectors and field of chemical, biological, radiological, and nuclear (CBRN) issues. He was a member of the U.S. Secret Service as a Senior Physical Security Specialist in the Technical Security Division and in the Chemical/Biological Countermeasures Branch. He is an independent consultant at Strongpoint Security.