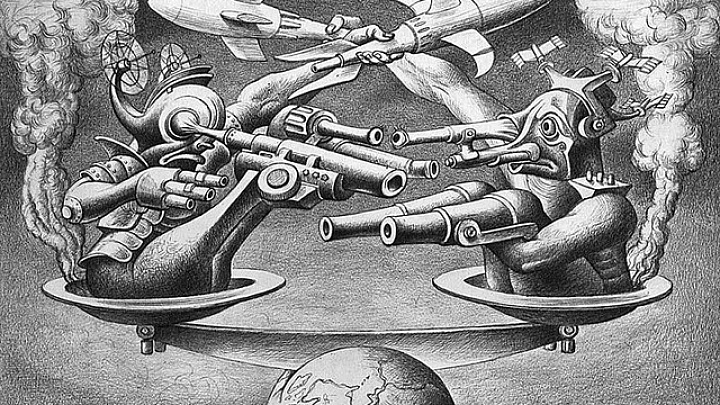 In case you missed, some people said they are running for President of the United States.

After months of resistance, President Obama also agreed to a bill that would give U.S. Congress 30 days to approve or disapprove any agreement between America and Iran on Tehran’s nuclear program.

Around 300 American paratroopers from the 173rd Airborne Brigade arrived in Ukraine to train with the Ukrainian National Guard. Russian defense officials claimed that their presence would destabilize the situation, but clearly they forgot to add though not as much as little green men and Russia-backed rebels.

10 Colombian soldiers were killed by FARC guerrillas, prompting President Juan Manuel Santos to resume airstrikes on FARC encampments after suspending them in March. Talks between the sides continue in the 50-year conflict.

Vladimir Putin accused America of raining on his WWII parade by telling other Western leaders not to attend commemorative events in Russia next month, implying European leaders are marching to Washington’s tune. That’s no way to get people to come to your party, though China and North Koreasaid they would come.

As hopes and negotiations for a nuclear agreement between Iran and America continue, Vladimir Putin suddenly decided to lift a ban on selling Russian arms to Iran, providing support to U.S. conservatives hoping to scuttle any agreement between Tehran and Washington.

Meanwhile, Russia’s Defense Secretary Sergei Shoigu blamed tensions following the Kremlins invasion of Ukraine on the United States and its European Union allies for diabolically attempting to pull Kiev into their fold, “forcing” Moscow to respond. He was, apparently, unaware that Ukraine is a sovereign country since 1990 and no longer had to call the Kremlin for permission. Intermittent fighting continued in Ukraine despite a ceasefire in place with Russia-backed rebels. Six Ukrainian soldiers and one “rebel” were reportedly killed. Around 300 American troops arrived in western Ukraine to help train Ukrainian National Guard forces.

Iran-backed Houthi rebels continued to advance across Yemen despite a third week of airstrikes by a coalition led by Saudi Arabia.

Taking a dog-eared page from the dictators playbook, Sudan held an “election” in which everyone already knows the result (namely that Omar al Bashir will remain President, continuing his 26-year rule despite a dead economy, near-famine, and a war crimes indictment for his actions in Darfur before the International Criminal Court).

ISIS has reportedly captured large parts of the massive Bayji oil refinery complex in central Iraq. Government and local Sunni tribal forces have been fighting to keep control of the complex since ISIS began its offensive. Illicit oil sales form a large part of ISIS’ funding. The refinery is also of major strategic importance to the Baghdad government.

India sealed a controversial deal to purchase 36 French Rafale fighter jets, moving away from the Russian-built aircraft currently in service. Critics argue the shift from French to Russian aircraft will create unnecessary expense, while others argue it is a hedge against manipulation from Moscow. In any case, the purchase is expected to save Rafale-producer Dassault from insolvency.

Al Shabab terrorists killed 148 civilians in an attack on a university in Garissa, Kenya. Al Shabab also claimed responsibility for a suicide car bombing which killed 19 in Mogadishu, Somalia.

The local United Nations human rights delegation in the Congo requested the exhumation of a mass grave near Kinshasa reportedly containing 400 bodies. The government maintains that the bodies are unclaimed persons from the morgue, but activists insist at least some are people killed in anti-government protests in March and are part of a cover-up.

Portions of Germany’s fleet of 36 zeppelins conduct bombing raids up and down England’s east coast. Meanwhile, British troops defend against a Turkish assault on Basrah, Iraq.

State-Building and the Wests Empire in Denial

The Other C-Word: Caliphate