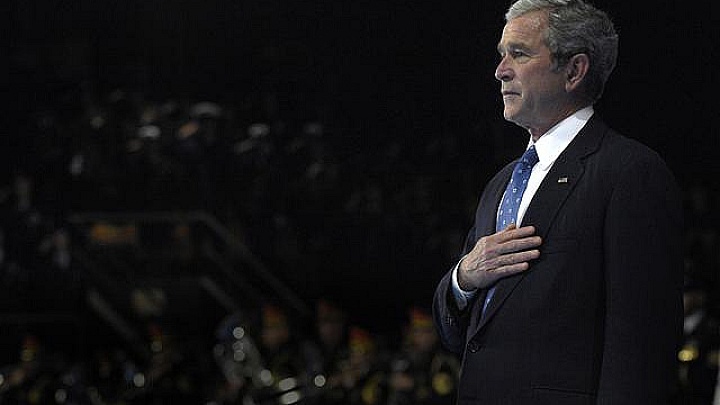 A recent article by CJ Chivers in the New York Times has again awakened the ugly beast of political revisionist history. Chivers reports that the George W. Bush administration repressed reports of U.S. troops being harmed by decaying, Gulf War-era chemical munitions—rather counter-intuitive for an administration that expended great effort to convince Americans and the world Saddam Hussein had chemical and other unconventional weapons, but could not find traces of them.

This was not news to me. I served in Iraq in 2003 and again in 2005 as an expert in chemical warfare, among other things. We were briefed more than once that a smattering of rusted chemical munitions had been unearthed or even used—ineffectively, probably mistakenly—in IEDs. None of us took it as the “smoking gun” of Saddam’s “WMD”. Neither did the Bush administration.

However, the response to Chivers’ article by many political partisans has been Bush was right. Iraq had weapons of mass destruction. Unfortunately, it becomes necessary to rehash why and how the United States decided to go to war in Iraq—and why George W Bush is still wrong. For many, this will seem an unnecessary history lesson. But for others it is apparently necessary.

America did not invade Iraq because Saddam Hussein still had a few rusty chemical rounds from the 1990s laying around. It was because—it was claimed—Saddam’s Weapons of Mass Destruction and related programs posed a current, imminent threat to the United States. This is quite a different assertion from a couple rotting artillery shells.

The Bush administration said the U.S. possessed intelligence that Iraq possessed viable, usable, deadly unconventional weapons—nuclear, biological, and chemical weapons and research and development programs and called for the use of military force to eliminate the  threat they posed.

Having made firm public commitments on Iraq throughout 2002, the Bush administration needed intelligence to support its policy and counter critics. Some involved with the Department of Defense’s Office of Special Plans (OSP) claim it was specifically created to connect Saddam Hussein and al Qaeda, find evidence of unconventional weapons in Iraq, and show Iraq was a threat to America. A 2002 DoD memo regarding another office, the Policy Counter-Terror Evaluations Group (PCTEG), explained that it was devised to collate and provide “analysis and evaluation” of al Qaeda’s links to states and to other terrorist groups.

As the Iraq War began, rumors swirled around the purpose and prewar actions of the OSP and PCTEG. Undersecretary of Defense Douglas Feith and Deputy Undersecretary William Luti held a press conference in June 2003 in which they admitted the purpose of the PCTEG had been to pore over intelligence the U.S. Intelligence Community had collected on Iraq and draw conclusions from it. However, Feith strenuously denied in the same breath that its purpose and activity was intelligence analysis.

America did not invade Iraq because Saddam Hussein still had a few rusty chemical rounds from the 1990’s laying around. It was because—it was claimed—Saddam Hussein’s ‘Weapons of Mass Destruction’ and related programs posed a current, imminent threat to the United States. This is quite a different assertion from a couple rotting artillery shells.

DoD Directive 5240.1 defines “intelligence activities” as “collection, production, and dissemination of foreign intelligence and counterintelligence.” PCTEG did not collect intelligence, but it clearly produced analyses and disseminated them to policymakers. Though the team only consisted of two dedicated staff—both U.S. Navy intelligence officers—it was assisted by the Defense Intelligence Agency (DIA) and the OSP staff and its work was brought directly to Defense Secretary Donald Rumsfeld in August 2002, who ordered it brought to DCI George Tenet. Later in August, PCTEG members briefed their intelligence product directly to Tenet and other Intelligence Community experts. In September, they briefed it to Stephen Hadley, Deputy National Security Adviser.

Republican Senator Pat Roberts, Chair of the Senate Armed Services Committee, requested the DoD Inspector General conduct an investigation into the matter. The report, delivered by the Deputy Inspector General for Intelligence in 2007, concluded that Feith’s office had indeed “developed, produced, and then disseminated alternative intelligence assessments” which were “inconsistent with the consensus of the U.S. intelligence community, to senior decision-makers,” continuing that, “we believe the actions were inappropriate because a policy office was producing intelligence products and was not clearly conveying to senior decision-makers the variance with the consensus of the intelligence community.”

In August 2002, the U.S. Senate pushed for a full National Intelligence Estimate (NIE) to be produced on Iraq’s unconventional weapons. The NIE is the intelligence community’s premier product and, though it makes little sense given its prime importance to policymakers regarding major security decisions, DCI George Tenet had not yet bothered of his own initiative to order an NIE be produced on Iraq, despite being his clear responsibility to do so. He later admitted it was a serious error on his part. It took a formal request from Senator Bob Graham, Chair of the Senate Select Committee on Intelligence, to push Tenet to finally develop an NIE.

NIEs take on average seven months to produce, though they have taken between as little as three months and up to three years. They should comprise the “collective wisdom” of the Intelligence Community, including its dissents and disagreements in analysis. However, the 2002 pre-war estimate, NIE 2002-16HC, Iraq’s Continuing Programs for Weapons of Mass Destruction, was produced in just three weeks. Both secret and unclassified versions of the NIE were disseminated in October 2002. Most of the text of the unclassified “white paper” had already been prepared in July, months before the classified NIE was even officially requested. A senior CIA analyst called it, “The worst body of work in [CIA’s] long history.”

According to Senator Bob Graham, the unclassified version of the NIE, “Did not accurately represent the classified NIE we had received just days earlier” and insisted it was an effort by DCI Tenet to skew the public version toward the position the Bush administration had taken. The classified version made clear that the Intelligence Community considered that Saddam did not pose an imminent threat to America or his neighbors if “left alone.” But this clarity was lacking from the unclassified edition, which instead supported the White House version of the facts.

Then-Republican Senator Chuck Hagel agreed that the NIE had been “doctored” to support the Bush administration’s needs. CIA had been ordered by the White House to produce the unclassified white paper. Paul Pillar, then CIA National Intelligence Officer (NIO) for the Middle East, conceded, “In retrospect, we really shouldn’t have done that white paper [the unclassified NIE] at all. It was policy advocacy” and wished he had refused to cooperate in the creation of the document because it was absolutely misleading.

A week after the publication of the unclassified version of NIE 2002-16HC, Congress voted to grant President Bush wide latitude to use force against Iraq on 11 October 2002. Many members of Congress, Republican and Democrat, were convinced by the unclassified NIE. Senators Diane Feinstein, John Kerry and John Edwards, who voted for the war authorization, admitted they were convinced by a combination of the unclassified NIE and private intelligence briefings. Following another famously flawed misrepresentation of U.S. intelligence to the UN Security Council by Secretary of State Colin Powell, the United States invaded Iraq in March 2003.

No, Bush is Still Not Right

No evidence Saddam possessed viable WMD at or near the time of the 2003 U.S. invasion of Iraq has ever been found. The intelligence analyses the Bush administration cited as showing Iraq possessed “WMD” and related programs and represented an imminent threat to the United States were inappropriately generated by sub-cabinet members of the Bush administration within the Department of Defense, reaching conclusions that the Intelligence Community had explored and rejected for lack of evidence. This dissent was not represented to policymakers. Such was the conclusion of the Department of Defense’s Deputy Inspector General for Intelligence.

President Bush and his administration cannot be proven right. Iraq did not possess viable unconventional weapons or programs when the U.S. invaded in 2003. The “intelligence” used to make the case for the Iraq War was faulty, misrepresented, and wrong. Nothing can ever change that, not even a New York Times article 11 years after the fact.

Chris Miller is an Army veteran and Purple Heart recipient following two tours in Iraq and has worked as a military contractor in the Middle East. His work currently focuses on strategic studies. His interests are CBRNe, military and veterans issues, the Cold War, and international security affairs.

Size of U.S. Army Should be Determined ...

Ron Capps on PTSD and Recovery from ...